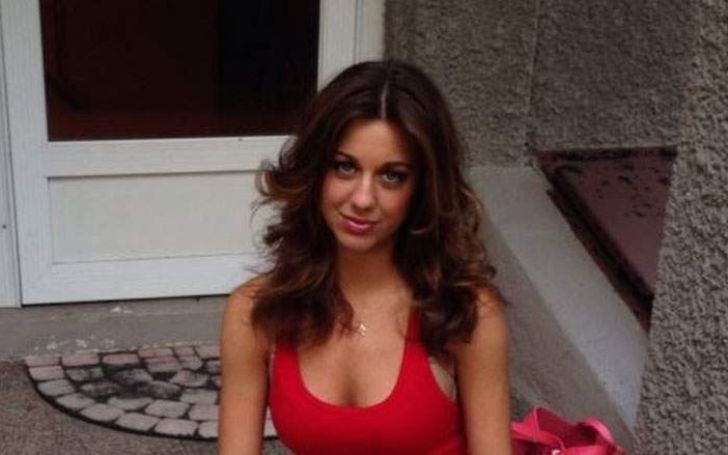 Emma DiGiovine Watters is famous as the second wife of FOX News journalist Jesse Watters. But apart from her high-profile association with one of the leading journalists, she has a career of her own. She is a fitness guru and a model.

Similar to her professional life, there are many aspects of her life that many of you might not know. For instance, did you know, Emma also worked as a model at one time?

Who is Emma DiGiovine Watters? Jesse’s wife is a former model

Many of us know Emma as Jesse Watters’ wife, however, she too relishes a great career, which many of you might not know. She was an aspiring model before hitting it off with Jesse at FOX News.

From 2012 to 2014, she worked as a model at MSA Models. In addition, she previously had a profile in Model Mayhem, a network for up-and-coming models. Her profile also read that she will not ‘tolerate’ nudity meaning posing without clothes was off the table from the get-go.

Moreover, DiGiovine was an aspiring actress as well, evident in her Explore Talent page.

As of now, Emma is an entrepreneur who works as a fitness guru. Since the Coronavirus lockdown, she has been posting a lot of at-home workouts and diets just so her fans can stay fit during this epidemic.

The fitness freak is also a writer and often writes for EliteDaily, a website for millennial women.

Emma is the only daughter and one of two kids of her mom Janice and dad Gregory. The former FOX News associate producer has a very deep bond with her folks.

She and her husband Jesse often spend various events together with the DiGiovine family. Emma usually shares Instagram posts with her family member and we can see Jesse in it as well. Goes on to show, Jesse is more like a son than a son-in-law.

Emma’s dad Gregory works as the State Contract and Program Manager at The New Jersey Board of Public Utilities.

Raised alongside one brother in Cranford, New Jersey

Emma has one brother, Gregory J. DiGiovine (Greg). Talking about her brother, he currently works as the Senior Associate at LS Power. In addition, he is a married man and tied the knot with his girlfriend in 2019.

Besides, the brother-sister duo is quite close. Emma even served as the bridesmaid at her brother’s wedding.

Their parents brought them up in Cranston, NJ, where they got their earlier education.

Emma DiGiovine is a Journalism Graduate

For her early education, she attended the Academy of Saint Elizabeth High School. The school is located in Morristown, NJ. Furthermore, it’s a Catholic single-sex education school.

Upon graduating high school, she joined the Fairfield University, where she studied journalism. In college, she was the Director of Marketing at the University Student Association. She graduated in 2014.

During her time in college, Emma was also a part of the Fairfield University Dance Ensemble.

Emma worked as an Associate Producer at FOX

Soon after her graduation, Emma started interning at the Showtime network and worked as the assistant for the VP of Corporate Affairs and VP of Entertainment. Later down the line, she joined the FOX News network in 2015.

Her time at FOX ended after her affair with the show’s host, Jesse came out in public. Upon Jesse’s revelation of infidelity to the network in November 2018, FOX transferred her to “The Ingraham Angle.”

Emma DiGiovine married Jesse after Hooking-up with him while she was the producer of, Watters’ World

When she was the associate producer of the show, Jesse started an extra-marital affair with Emma. Jesse’s wife Noelle Watters discovered their affair and subsequently, she filed for divorce.

Following the divorce filing, Jesse revealed he indeed had an affair with Emma. Their divorce got finalized in 2019 and eventually, Emma and Jesse tied the knot.

Emma and Jesse exchanged vows on December 30, 2019. The pair had gotten engaged a few months back in August 2019. The beautiful wedding ceremony took place at The Ritz-Carlton Resorts of Naples, Florida.

The nuptials was an extravagant affair with many of the duo’s friends and family in attendance. Both of Jesse’s daughters, Ellie and Sophie Watters served as the ringbearers.

Talking about the dresses, Emma wore a white mermaid dress with a long veil, while her groom Jesse looked dapper in a black tux with a white shirt.

So far, the duo doesn’t share any kids, though Jesse has two twins Ellie and Sophie, from his marriage with Noelle. Emma has a great connection with her stepdaughters and once in a while shares pictures with them.

How much is Emma DiGiovini’s net worth?

As of 2020, her total net worth is $500,000. She earns the majority of her income through her work as a producer. In addition, she also earns a hefty amount of money through Instagram via affiliate programs.

Meanwhile Emma DiGiovine’s husband Jesse is worth $5 million. His annual salary is $2 million.