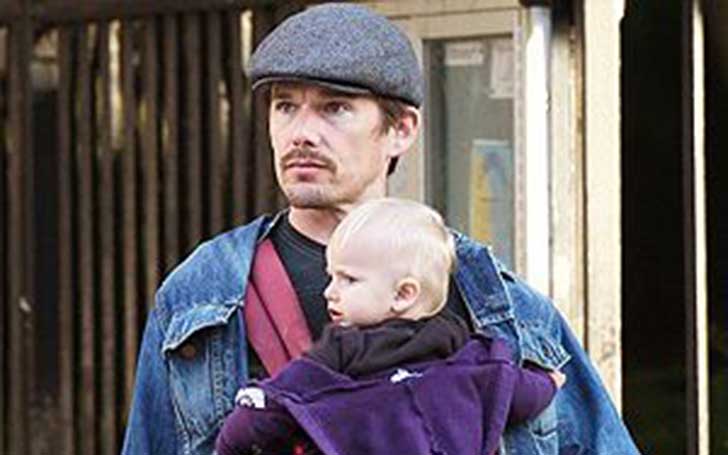 Any fan wants to know about their icon. Not only their profession but their personal life is also the main attraction for the fans. But, celebrities like Clementine Jane Hawke, who is the daughter of Ethan Hawke, like to keep their personal stuff away from the media and their fans.

While on the contrary, Clementine’s father Ethan Hawke has opened up almost everything about his personal life.

From his first marriage and divorce to his children, his fans are aware of the actor’s personal life. But, he hasn’t shared much about his children with his second wife, Ryan. His kids with Ryan are still too young which might be the reason Ethan has kept them out of the public eyes as possible.

Today, we’re talking about one of his two daughters with his second spouse, Clementine Jane Hawke. Stay with us to know interesting facts about the star kid.

Clementine Jane Hawke is the Third Child of Ethan Hawke

Clementine Jane Hawke was born on July 18th, 2008 in New York City. She is the third child of actor Ethan Hawke and first with his second wife, Ryan Shawhughes. The proud parents had announced the upcoming arrival of their first child in January that year.

Clementine’s parents had got married just a month prior to her birth (in June 2008). The couple, however, kept their marriage private until a couple of weeks when the actor’s representative confirmed it to People. The rep. said Ethan and Ryan tied the knot in New York on the 18th of June.

She Is Close To Her Parents

Like any other child, Clementine, too, shares quite a bond with her parents, father Ethan and mother Ryan.

In fact, she is often seen accompanying her parents on several occasions.  The adorable kid is just 12 as of 2020.

Clementine’s father, Ethan Hawke is a well-known American actor, writer, and musician. Ethan is famous for his appearance in the 1989 drama Dead Poets Society. He gained critical acclaim for his role in the 1994 drama movie, Reality Bites.

Hawke was nominated in the Academy Award for two categories; for Best Adapted Screenplay and for Best Supporting Actor for Before Sunset, 2004 romantic drama film. Ethan is equally famous for his theatrical works that include The Seagull, The Coast of Utopia, and A Lie of the Mind among others.

Her Mother was Ethan’s Nanny

We’re not unaware of the celebrity nanny scandal. Many celebrities have ruined their married life due to their hook up with their nannies. One of those celebrities is Ethan Hawke who later went on to marry the nanny with whom he cheated on his first wife.

Many online tabloids have said Ethan’s relationship with his then-nanny Ryan ended his marriage with his first spouse Uma. However, the actor himself has denied the fact on multiple occasions.

Clementine Hawke is 12 years old as of 2020. She has a sister, Indiana Hawke, three years her junior. Besides, Clementine has two half-siblings, a sister Maya Hawke and a brother, Levon Hawke from her father’s first marriage to Uma Thurman.

Ethan and Uma got married in May 1998 and remained together until 2003. They separated in 2003 and the reason for their split was Ethan’s infidelity. The estranged couple filed for divorce in 2004 and they finalized their divorce in August 2005.

Her Half-Sister is an Actress

Clementine’s half-sister, Maya Hawke has followed her father’s footsteps in acting. Maya is 22 years old and has worked in a couple of series and films. Maya started her career as a model. In 2017, she became one of the faces of the video campaign for Calvin Klein’s underwear range.

The same year, Maya made her acting debut in the BBC miniseries adaptation of Little Women in which she played the role of Jo March. Maya got her breakthrough role as Robin Buckley in 2019 when she was cast in the third season of Netflix’s Stranger Things. As of 2020, she has worked in Gia Coppola’s film, Mainstream which is in post-production currently.

Clementine is just 12 years old and is attending her studies as of now. She enjoys a luxurious childhood being a child of a multi-millionaire father. Her father, Ethan Hawke has an exquisite net worth of $55 million as of 2020.

Ethan earns a handsome sum of money from his acting career. His salary is not known precisely, however, he has earned up to $2 million from a single project. According to Forbes, Ethan received a paycheck of $2 million for his role as James Sandin in the horror-thriller The Purge.