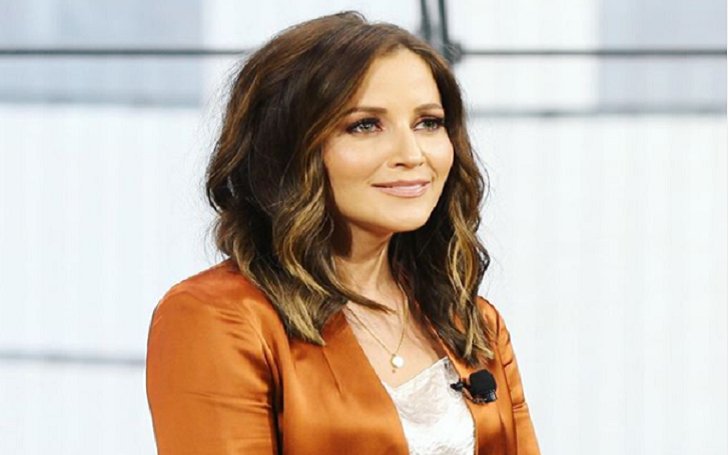 Kay Adams is a sports enthusiast with a wide knowledge of football. It’s great that Adams also turned her interest into her profession and is working as a sportscaster for a decade now.

The distinguished media personality currently serves as a host of the NFL morning TV program Good Morning Football on NFL Network. She also featured on many other popular sports programs like SiriusXM Fantasy Drive and more.

So, do you need to discover further about Admas, from her workaholic parents, struggle at college to her professional endeavors as well as her love life as nicely? If yes, then read the full article.

Kay Adams’ Parents immigrated from Poland to the U.S

Kay Adams was born on 6th April 1986, in Chicago, United States of America. Her parents were from Poland. After they moved to the US, they had a hard time meeting their daily need despite all the efforts they made.

Although the nature of her dad’s job is not known, Kay did announce his retirement on her Instagram account in July 2018. She shares a deep bond with her doting father and often shares photos with him on social media.

Adams has two older siblings, a brother named Adamski and a sister Sylvia Wrobel. Her big bro is a lawyer.

Kay holds an American nationality and has a mixed ethnical background. She is of Polish descent and is fluent in Polish too.

Education: Is a University of Missouri graduate

Kay Adams attended Whitney M. Young Magnet High School in Chicago. While in school, she wrote for the school paper. She also developed video reports for science projects and had a modern presentation on “Romeo & Juliet.” , Kay since decided to work in the media field.

Adams first started working at Willie’s Pub and Pool, a nightclub located on Columbia’s historic Broadway street. After some time, Adams joined the country radio music and worked from midnight to 6 a.m. on Fridays and Saturdays.

Kay Adams scored her first role as the in-stadium host at Busch Stadium. She gained local fame following her work as an in-game host for the St. Louis Cardinals at their home games. She told Front Office Sports it was hard for her to get a job on Cardinals,

“I’d be knocking on the St. Louis Cardinals’ door until they hired me. I cannot tell you how many emails I sent the local NBC affiliate in St. Louis saying let me do this.”

Adams gradually hosted some fantasy football shows, including SiriusXM Fantasy Drive and SiriusXM’s Livin’ the Fantasy. She also served as a host of DirecTV Fantasy Zone.

Good Morning Football and Her Breakthrough

Kay Adams made a big break when the sportscaster became the part of Good Morning Football, a live NFL morning television program. It airs on NFL Network from 7 a.m. to 10 a.m. ET. She co-hosts the program along with Kyle Brandt, Nate Burleson, and Peter Schrager on the weekday edition.

Other casts of the show are Mike Garafolo, Michael Robinson, and Colleen Wolfe. Reggie Bush and Steve Smith Sr. features on the program on Saturdays.

Furthermore, Adams also hosts some special events of the Chicago Bears, a football team based in Chicago. On September 17, 2018, it was announced that Adams will join the DAZN broadcast team alongside Sugar Ray Leonard, Brian Kenny, Chris Mannix, and LZ Granderson.

What is Kay Adams Net Worth and Salary?

As per sources, Kay Adams has a net worth of $500,000 as of 2020. She has earned the majority of her wealth from her media career solely.

Talking about her yearly payment, the sportscaster’s average salary in the United States is $50,623 as per PayScale. So, with her years-long experience in the field, Kay is undoubtedly paid more than the average salary.

Kay Adams, 34, is not married yet and has neither shared any plan to tie the knot. She has remained very private about her love life keeping every detail to herself.

Furthermore, Kay never came out with any boyfriend. She once hinted via Twitter that she was dating an athlete boyfriend back in the early 2010s.

“Arian Foster is going OFF on my boyfriend, Colin Cowherd? I dunno how I feel about this, AF. not cool.”

“My boyfriend is having a rough game tonight.”

Despite all that, Adams never revealed the real identity of her then alleged-bae.

Some sources say that Kay Adams once reportedly linked to Danny Amendola, a football wide receiver for the Detroit Lions. She shared a photo of her then alleged-boyfriend Danny on Instagram during the 2015 Super Bowl on Insta. A commenter wrote on the post, “she is dating Danny now HUH.” Nonetheless, the couple never confirmed and denied the rumors.

Adams is probably a single now.

Other Interesting Facts of Kay Adams

In August 2016, the sportscaster told Katie Nolan on Garbage Time that her favorite dish is pizza or a burger.

Kay is an avid traveler who has already traveled to several beautiful places around the world like Machu Picchu, Cusco, Panorama Ridge, Garibaldi Provincial Park, and Skogar as well.

Adams is too close with her sister-in-law Amanda Konopka and her daughter Maya.

Who Is Kay Adams Husband or Is She Dating a Boyfriend? Details Here