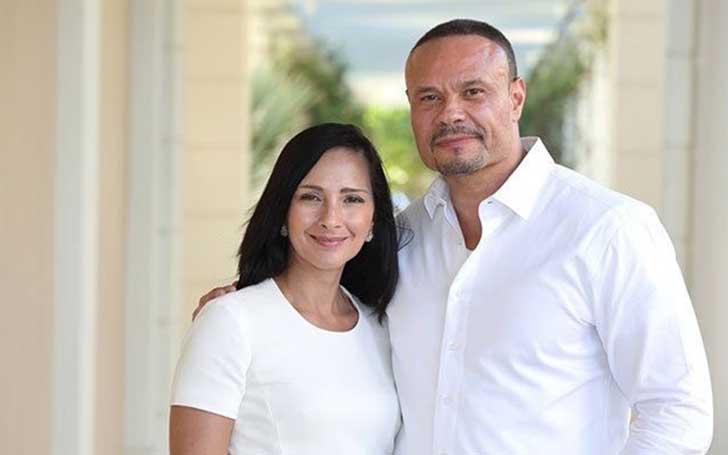 Paula Andrea Bongino is an American celebrity spouse, who is the wife of Dan Bongino. Her hubby is a multi-faceted personality. The 47-year-old American journalist has had a successful career as a political commentator, conspiracy theorist, radio show host, and author. He has also formed a couple of successful businesses with his wife Paula. The couple has been together for two decades, and their relationship is still growing strong.

Paula’s husband has been in the media for years and he is a pretty popular face in the entertainment industry. His fans are always curious to know about his personal life which includes his married life and children. In today’s episode, we are talking in detail about Dan’s wife Paula Bongino.

Let’s have a closer look.

Paula Bongino and the Fox News correspondent Dan have been married for nearly 18 years. Paula and Dan got married on August 30, 2003. The pair exchanged their vows in a privately organized wedding attended by their friends and family.

They have spent nearly two decades as husband and wife and their relationship has only grown stronger over time. Their love and respect for each other is the ingredient for their successful married life.

Dan has time and again expressed his gratitude to his wife Paula on his socials. Besides, he also shares numerous photos of the husband and wife on Instagram. In fact, he never misses wishing on her birthday or their anniversary which shows the affection they have for one another.

How Did They Meet and how their Romance Blossomed?

Paula and Dan met for the first time in the early 2000s and they hit it off soon. If the sources are to be believed, they met on a blind date at Sullivan’s restaurant in New York City.

Coincidentally enough, their first meeting was sheer two weeks before the infamous 9/11 attack at the World Trade Center. Bongino recalled the moment after the attack,

“I kept calling her at her office over and over. Paula literally worked at Ground Zero at the Securities INdustry Association. So I was worried, really panicked.”

However, Paula, his future wife at the time, was thousands of miles away in Nevada. She was there to meet her mother. They lost contact for a while and then ultimately reunited.

A couple of years later, Bongino took Paula to the same restaurant where they had met for the first time for dinner. There, he got down to one knee and asked his then-girlfriend to be his wife. “I said ‘yes’ and was very emotional,” Paula said reminiscing about the moment.

“Even though I could tell when he picked me up from the train station that day something was up. He was a Secret Service agent, but I could always read him like a book.”

Dan didn’t have to do any hard work to melt his future wife’s heart, however, it was difficult for him to win his future mother-in-law’s approval. Bongino said his mother-in-law didn’t like him the first time she met him. However, Dan later said that eventually, she started liking him.

Andrea and her husband of nearly two decades, Dan are proud parents of two kids. They are blessed with two daughters, Isabel Bongino and Amelia Bongino. The pair gave birth to their first daughter, Isabel on January 15, 2004, less than a year after their marriage.

Meanwhile, Paula’s youngest daughter, Amelia is at her primary level. She graduated from preschool in June 2017.

Paula’s husband Dan was diagnosed with early-stage throat cancer back in September 2020. On 23rd September Dan announced that a 7-centimeter tumor was found in his throat, however, he was unsure if it was cancerous or not.

He also announced that he was flying to NY for further screening. On October 2, Dan announced that he received a “bad phone call” from doctors. After the diagnosis, he underwent surgery on October 7 and the entire tumor was removed from his throat.

Further, on October 16, Dan confirmed that he was officially diagnosed with Hodgkin’s lymphoma and said he would be receiving frequent treatment in consultation with his doctors.

Paula was born Paula Andrea Martinez in Cali, Colombia. Paula was born on August 2nd, however, the year she was born is still unclear. However, we have come to know that she is in her early 40s as of 2022 making her birth year to be in the early 1980s. She is a naturalized US citizen when it comes to her nationality and belongs to the Hispanic ethnicity.

Well, there isn’t much info about Paula’s parents, however, we do know that she has a brother named Juan Martinez. Juan resides in Las Vegas, Nevada.

Talking about Paula’s education, she mentioned in her Facebook bio that she studied CIS at Baruch College and graduated in 1998.

Even though Paula Bongino is a popular celebrity spouse and a businesswoman in herself, she doesn’t indulge in sharing her life on socials. She is active on Instagram, Facebook, and Twitter. She doesn’t share much on her social media profile, however, she keeps it active.

Bongino has around 5.5k followers on Twitter and her last post is dated back to August 2019. She used to share photos with her husband and children in the past on Twitter however, she hasn’t done it in recent years.

Besides, her husband, Dan is pretty active on all three major social media platforms. He has more than 1.5 million followers on Instagram whereas his Twitter account has even more followers i.e., 3.6 million in 2022. He frequently shares his work-related photos and he time-to-time updates his fans with his personal photos as well.

With her formal education in computer science, Paula is a professional web developer. According to her Facebook bio, she previously worked at SIFMA, a securities industry. Nevertheless, there are no details about her work after she met her now-husband, Dan.

Besides, in 2012, when they had just welcomed their second daughter, Amelia, the husband-and-wife duo ran three businesses from their home. They reportedly ran three businesses, selling martial arts apparel, designing websites, and consulting on security and risk management simultaneously.

They couldn’t prosper in their business much and they ultimately had to shut all of them down.

Paula Bongino doesn’t have much work experience so we can easily say she hasn’t earned as much fortune as her husband. With a couple of years of work and some short-run businesses, she might have earned a good sum of money. However, her net worth at present is something unpredictable.

Nevertheless, we can assert Paula lives in luxury with the fortune her husband Dan has earned from his different working endeavors. Dan, who previously served as an NYPD secret officer has been working as a radio host and political commentator.

Besides, he is a Republican supporter and is particularly known for his staunch support of former POTUS Donald Trump. Talking about his net worth at present, Dan Bongino is worth $8 million.

Paula and her husband, Dan currently live in Palm City, Florida with their two children. They relocated to the southern US state in 2015 after living in Severna Park, Maryland for around thirteen years.