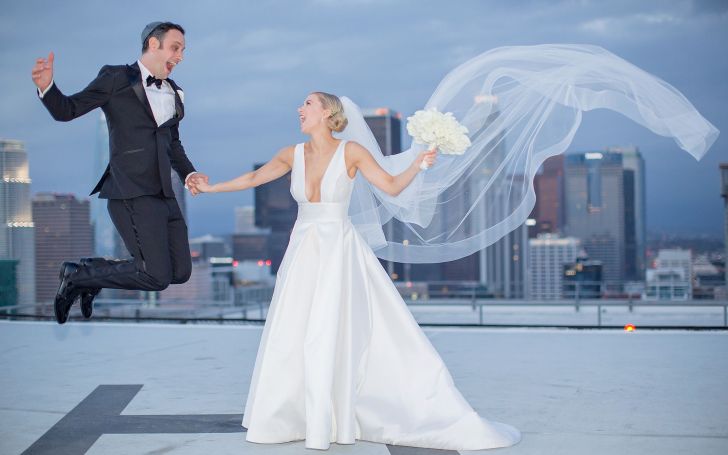 The winner of Last Comic Standing, Iliza Shlesinger is one of the great comics out there. The beautiful comedian married her boyfriend in 2018 and since living a great life.

After getting married, Iliza has talked about her marriage in great lengths, be it on Netflix special or just in general. This has made her fans curious about how was the ceremony. To answer in a few words, ‘it was different.’

Today we’re going to take a look at all the exclusive details about Iliza Shlesinger wedding. Apart from this, we’ll also talk about her marital relationship with her husband, Noah Galuten.

Iliza Shlesinger and Noah Galuten Wedding: All the details

After years of making jokes related to marriage, the one and only Iliza also got roped into it. She exchanged vows with her boyfriend of a few years, Noah on May 12th, 2018.

The beautiful ceremony took place at South Park City in Downtown, Los Angeles. Many of the pair’s friends and family were in attendance including celebs like Mayim Bialik. Moreover, Shlesinger’s cousin and Deadbeat creator Brett Konner also attended.

All the intricate details!

The pair had planned for a bright open space type of ceremony. Shlesinger said she didn’t want a closed warehouse-like wedding. And so the pair went hunting for the perfect venue in Downtown, Los Angeles.

Soon, they came across City View Penthouse & Skydeck at the South Park Center. The location was as per they’d envisioned. Aside from all the bells and whistles, the venue also had a helipad and according to Iliza, “if you aren’t having your wedding pictures taken on a helipad, what are you doing in life?”

For her big day, she donned a Monique Lhuillier white gown. Initially, upon seeing the dress for the first time, Iliza decided to wear it for her wedding. But, the dress was tea-length and Iliza wanted a full-sized gown.

She said, “The sample was tea-length, and I remember thinking that it was such a shame because the dress was so pretty, but I wanted a full-length gown.”

Lucky for her, the very next day, she returned to the salon and found the same dress but this time in full-length. Iliza and her mom also decided to add a rhinestone-embellished veil.

In her Netflix special, Shelsinger talked at great lengths about how she abolished numerous traditions. She refused to cover her face with a veil as she wanted to have a full 360-view of the nuptials and not ‘watch it through gauze.’

Meanwhile, her husband, Noah, wore a simple black suit along with a Kippah, a traditional Jewish hat.

Well, you can’t see what type of shoe a bride is wearing due to the full-length gown. But Iliza made sure everyone takes a close look at her shoes. She wore a Nike Dunk Sky Highs sneakers, however, they were a little customized.

As you can see in the photo above, she added pearls onto her white leather shoes. This made it look all the more unique and matched Iliza’s eccentric personality.

Iliza and Noah went for the Marvel Jewelry bands for their wedding. As for their engagement ring, Noah proposed her with an Emerald cut diamond ring in 2017, a year before their matrimonial.

In addition, the ring was platinum and the setting was Prong. Iliza showed off her engagement ring right after her then-boyfriend now-spouse proposed.

One of the cutest moments from the nuptials, Iliza’s puppy Blanche was the flower girl. She donned a floral coral on her collar as one of Noah’s groomsmen helped her down the aisle.

Iliza, while telling the whole story to Brides, said, “She started to cry before I walked down the aisle but I couldn’t go to her because, hello, I was about to walk down the aisle. But if I could have, I would have carried her instead of my bouquet, and our first kiss would have been Blanche, Noah, and me.”

Iliza’s husband Noah is a food blogger and chef so it was natural he was the one behind the cooking scene. One of his close pals Jeremy Fox, with whom he’d written the book, On Vegetables, prepared the evening meal.

Aside from all the beverages and stuff, Jeremy prepared smoked black cod with green garlic ravigotte and stuffed chicken with nettles salsa verde.

How is Iliza Shlesinger and Noah Galuten’s marital life going?

The pair is relishing their life ever since they got a stamp on it. Both of them share a lot of pictures together and during the Coronavirus lockdown, they even started a show called, DontPanicParty.

In the show, Noah prepared different types of foods in each episode. Iliza shared the full episode of the show on her Instagram channel.

The duo does not share children but they are proud parents of one beautiful puppy named Tian Fu.

Besides, Iliza and Noah started dating back in 2016. In the beginning, they meet in a dating app and after chatting for a few days, they went on their first date in July of the same year.

After dating for a year, Noah proposed Iliza in 2017, and one year after getting betrothed, they got married.