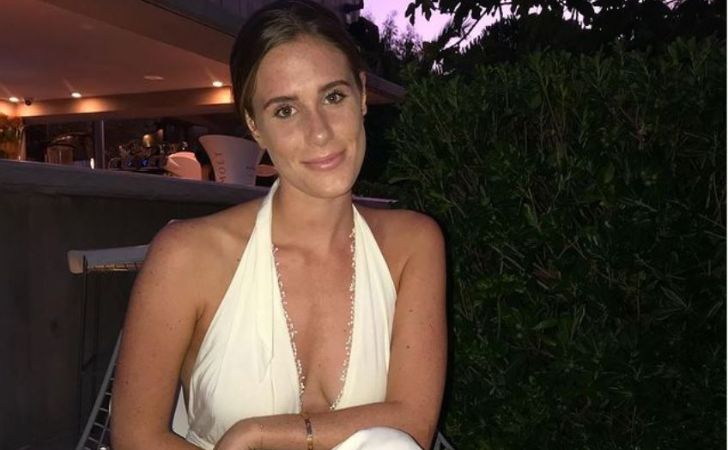 Natalie Buck is a Telecommunications engineering and an actress as well. But she is mainly recognized as the daughter of American sportscaster Joe Buck. Along with achieving a career milestone as an engineer, she has also explored the acting world with a few appearances in minor roles in some popular movies.

Along with a decent achievement as a professional, Natalie also leads a beautiful relationship with her boyfriend. Want to know more? Well, there are a lot more interesting details about her you had always been looking for.

Continue with the article.

The beautiful Natalie Buck was born on June 7, 1996, to father Joe Buck and mother Ann Buck in St. Louis, United States. She spent her childhood in her hometown with her parents before moving to Bloomington, Indiana. As the eldest child in the family, she shares a great relationship with both her mother and father.

She did her schooling at Villa Duchesne and Oak Hill School, in her hometown in St. Louis, Missouri. Later, she moved to Indiana University, where she majored in Telecommunication Engineering.

Besides, as an acting aspirant, Natalie also took acting lessons at The Vagabond School of The Arts in Michael McCracken, Chicago, in 2007. Along with his, she also took a scriptwriting course at The Second City in 2016.

Career: Natalie Buck Is An Engineer But Aspires To Be A Sportscaster

The graduate of Indian University Natalie Buck owns a degree in Telecommunication engineer. But if reports are to be believed, she aspires to join her family business as a sportscaster.

In fact, she has already completed her internship at Fox 2, St. Louis. Well, as an intern, she sat at the news desk, where she had to primarily give an editorial on fans running on the fields at a Cardinals game.

Just for a fact, both her father Joe and step-mother Michelle Beisner-Buck are successful sportscasters.

Natalie Is Also An Actress

Buck’s field of interest does not end at sportscasting. She is also interested in acting and has already accomplished pretty much as an actor. In fact, she has already appeared in a few movies and TV series.

She made her acting debut as Megan in the 2010 TV series Blue Blood. Likewise, in 2015, she played a customer in an episode of Superstore.

Similarly, she is also all set to appear in the 2022 Romance/Comedy movie Marry Me. The movie stars big stars like Jennifer Lopez, Owen Wilson, Sarah Silverman, among others.

Is Natalie Buck Dating a Boyfriend? Planning To Marry?

Natalie is actually in a relationship, and she is pretty open about it. She is dating a boyfriend named Bobby. While the couple has not revealed when they began dating, but it looks like they are together for a while now. Natalie made the first public post together with Bobby back on April 1, 2017, on her Instagram, where she introduced him as “Bobby” in the caption.

The lovebirds apparently seem to share a great bonding. In fact, Bobby is all over her Instagram and Facebook posts. Well, like any couple, they often got out on vacations together and seem to really enjoy the company.

But what are their wedding plans? It looks like the couple is in no hurry to tie the knot. However, considering the kind of bonding Natalie shares with her boyfriend Bobby, it is highly possible the two will soon end up walking down the aisle.

She Has Two Half Siblings From Her Father’s Second Marriage

If you didn’t know, Natalie’s father Joe Buck has been actually married twice. He was first married to Ann Buck. They got married on January 23, 1993. The most romantic thing about the former couple is that Joe had proposed to Ann during a live radio broadcast.

The couple welcomed two daughters from their relationship, one being Natalie and the other Trudy Buck. Needless to say, Natalie shares a great relationship with her younger sister Trudy.

Besides, she also has two half-siblings, who are born from her father’s second marriage. Post her father’s divorce from Ann in 2011, he married ESPN reporter Michelle Beisner-Buck on April 12, 2014.

They welcomed a twin son together on April 26, 2018, Blake Andrew & Wyatt Joseph. Like any sister, Natalie made a public announcement of the coming of her twin brothers via an Instagram post. In the caption, she wrote,

Blake Andrew & Wyatt Joseph I love you to the moon and back 💙 I have always wanted brothers. God works in such magical ways.

Natalie is pretty fond of social media. She is not only on Facebook but on Instagram as well and she is active on both the platforms. As of 2021, she has over 9k followers on her Instagram.

On bother the platforms, she pretty much gives insight into her personal and professional life.