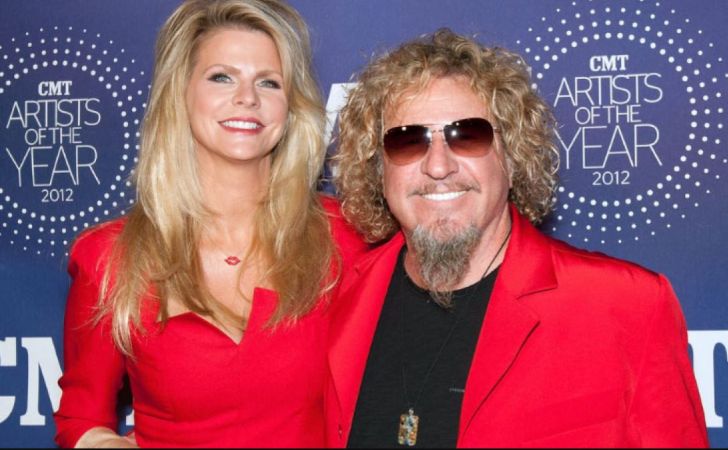 Kari Karte is an American reality TV personality and producer, popular as the second wife of American singer Sammy Hagar. She known for her works like Rock & Roll Road Trip with Sammy Hagar, Ram Dass, Going Home, and numerous others. Besides, she has also appeared in talk shows and reality series like I Married…, Oprah: Where Are They Now?

She reportedly got into producing works only after her marriage with Hagar. As of 2021, she is married for years and also has two children from her marital relationship. Take a look at her family life, parents, earnings, and more details.

Kari Karte Bio: Her Father Was In U.S. Navy

Successful American producer Kari Karte was born on January 7, 1967, in the USA. She is the daughter of Harold Raymond Karte, also known as Chic Peters. He was in U.S. Navy as a Corpsman and was a recruiter during the Vietnam War.

As a child, Kari lived a large part of her life in Austin, Texas, along with her father, and later also lived briefly in Florida. Unfortunately, she has not revealed much about her mother.

Besides, Karte also has a sibling, a brother named Gregory Kunkle. She reportedly has a great bonding with her brother as well.

As we mentioned earlier, Kari is not only a TV producer but has also appeared in a few TV series. She made her debut on TV with the reality series I Married… in 2005. Later, in 2012, she appeared in one episode of the series named American Restoration.

Eventually, in 2016, she appeared in Oprah: Where Are They Now? where she appeared alongside Oprah Winfrey, Kato Kaelin, among others.

The following year, she was a part of the documentary series both as an actor and producer for Red Til I’m Dead: Sammy Hagar’s Rock-N-Roll Birthday Bash. In the series, she appeared along with her husband Sammy Hagar, among others like Michael Anthony, Jerry Cantrell, and many more.

Her longest TV appearance was in the musical TV series Rock & Roll Road Trip with Sammy Hagar. She appeared in 3 episodes from 2016 to 2020. Besides, she was also the producer of the series.

Apart from these, Kari was also the executive producer of the short documentary series Ram Dass, Going Home.

Karte is Married To Sammy Hagar Since 1995

Kari and her husband Sammy are now married for over 25 years. They reportedly tied the knot on November 29, 1995. Their wedding was pretty much a private ceremony attended by very few friends and family members.

But when did the couple first meet? Well, Kari met her now-husband Hagar back in 1991. At the time Hagar was married to his first wife Betsy Berardi. Soon after getting to know Kari, he left Betsy in December 1991. Around August 1992, the new couple also went on a trip together to Hawaii.

They dated for around 4 years before they finally decided to walk down the aisle.

She Has Two Children With Her Husband

From her marriage that has already spanned over 2 decades, Kari became a mother of two daughters. Her first child, Kama Hagar was born in 1996. Likewise, her second daughter, Samantha Hagar was born on March 24, 2001.

Like her parents, Samantha has appeared in a few TV series. But on the other hand, Kama is into health and wellness and is a Certified Holistic Wellness Coach.

Besides, Kari also has two step-children, Aaron Hagar, and Andrew Hagar who were born from her husband’s previous marriage.

Kari Karte Dated a Boyfriend In The Past

Sammy is not the only man Kari has been with. As addressed in Sammy’s 2011 book, Red: My Uncensored Life in Rock, his wife Kari dated an NFL player Jim Kelly.

While she has not revealed when they exactly began dating, they were apparently together for quite a while. Eventually, after getting to meet Sammy in 1991, she fell in love with him and abandoned Jim.

As a producer, Kari leads a pretty successful career and also earns a decent salary. But when it comes to her net worth, she has not revealed the exact sum she owns. That said, some sources assume she has around $500,000 to $1 million in net worth.

On the other hand, her husband is pretty with over $150 million in net worth, as per Celebrity Net Worth.