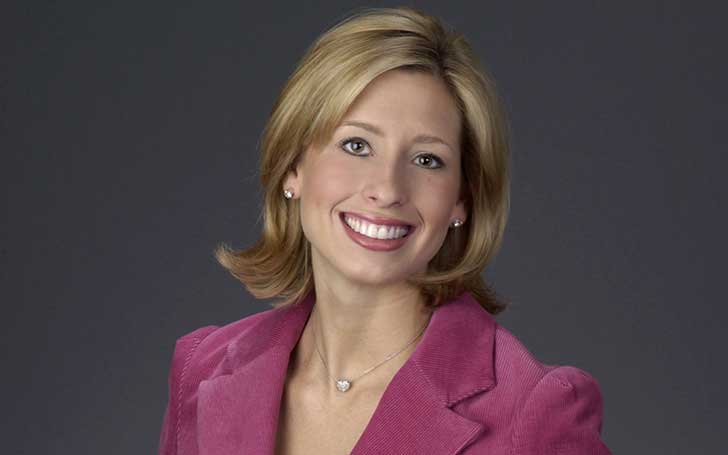 Stephanie Abrams is a successful American meteorologist who currently works for The Weather Channel. Further, she also co-hosts AMHQ with Jim Cantore and Jen Cargango on early weekday mornings.

While she leads a successful professional life, what about her love life? Is she married? If yes, who is her husband? Does she have any kids?

Here in this article, we are going to talk in detail about her career, personal life, & everything you need to know about the Florida-native meteorologist.

Who is Stephanie Abrams? Her Age and Education

As of now, Stephanie Abrams is 43 years old. She was born on October 27, 1978, in Wellington, Florida, the United States. She is the daughter of Barry Abrams.

Abrams graduated from the University of Florida in Gainesville with a Bachelor of Science in geography. She had minored in mathematics. In addition, she was a member of the Delta Phi Epsilon sorority.

Stephanie began her career in the early 2000s as a morning meteorologist at WTXL, an ABC affiliate in Tallahassee. In July 2003, she started working for The Weather Channel as a reporter and fill-in. She worked as a fill-in anchor until 2005 when she started her first TV show, Weekend View as a co-host.

In July 2009, she started working as a co-anchor on the NBC show Wake Up With Al alongside Al Roker on weekday mornings. During the Winter Olympics 2010, Stephanie and Roker reported live from Vancouver.

In 2012, Abrams became interim weather anchor on Weekend Today after Bill Karins and Janice Huff left the show. Later, Dylan Dreyerreplaced her as an anchor.

As of now, Abrams hosts AMHQ with Jen Carfagno and Jim Cantore.

Once Appeared in a Movie

Stephanie Abrams made her appearance as herself in the television film Sharknado 2: The Second One in 2014. Apart from this, Stephanie didn’t appear in any other movie.

The 43-year-old Florida native has been working as a meteorologist for over two decades. Her net worth is $3 million.

Stephanie Abrams Is Married: Who Is Her Husband?

Stephanie is a happily married woman, but, she has not revealed her husband’s identity as of yet. Abrams frequently often shares pictures with her spouse on social media. But refrains from sharing his name.

Nevertheless, the lovebirds go on vacation whenever they are free. Stephanie loves sharing snaps from their vacation on social media.

On the same token, Abrams and her husband celebrated New Year 2020 together in Great Britain. On 7th January 2020, she took to her Instagram to share pictures from the romantic trip to London and Iceland.

Happy New Year! Back to work today after an adventurous and celebratory trip to Iceland and London! A few highlights include the #BlueLagoon , a #LavaTunnel , the #NorthernLights (filtered so more visible), the #NorthAmericanPlate , hiked a #glacier, caught some #IridescentClouds (filtered) and had a bday celebration for my insanely gorgeous and ageless MIL!

Well, the husband-and-wife duo went to watch the Kentucky Derby in Louisville, Kentucky in May 2019. After the competition, Stephanie shared photos on Instagram and wrote “We’re off to the races” in the caption.

Stephanie Abram’s exact marriage is not known, but, we can say that they got married in the fall of 2017. Abrams revealed she has a hubby to her fans on Instagram. Here is the photo:

They Became Engaged in February 2017

On February 19, 2017, Stephanie Abrams announced her engagement through an Instagram post. She also flaunted her engagement ring in one picture. Meanwhile, she mentioned they had become betrothed one week prior.

Stephanie hasn’t disclosed their first meeting and the time they started dating. However, looking through her Instagram posts, we can say they might’ve come across while studying at the same high school.

In May 2016, she shared a friends’ reunion photo on Instagram featuring her husband and a couple of more friends. In the hashtag it was written, #highschoolreunion.

There exists a rumor that Stephanie was once married to Mike Bettes. For those of you who don’t know, Mike and Stephanie used to host, Abrams & Bettes Beyond the Forecast.

Speculations about their alleged behind the scene marital life came due to their terrific chemistry in the show. However, neither of them ever said anything on the matter. It is highly plausible the news is fake.

Besides, Mike is happily married to a meteorologist Allison Chinchar since 2012. The duo even shares a son.