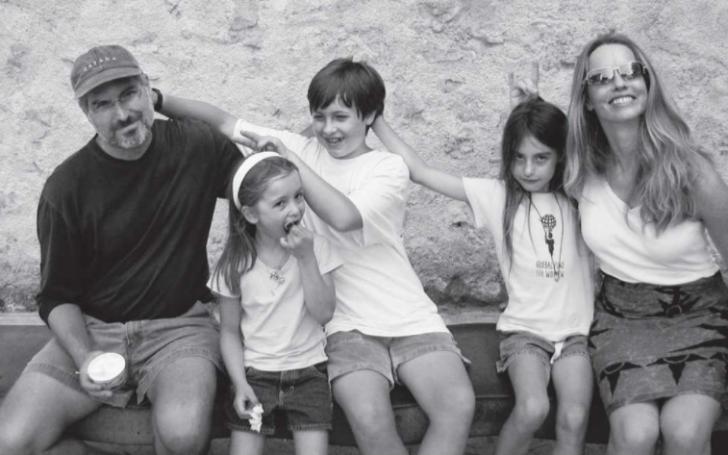 Steve Jobs is considered a pioneer in the field of technology. He almost single-handedly created Apple, a trillion-dollar company. Despite all the fame, he always kept his family’s privacy safe, especially his four children, Erin Siena Jobs, Reed Jobs, Eve Jobs, and Lisa Brennan.

Today we’re going to take an in-depth look at the life of Steve Jobs’ daughter, Erin Siena Jobs. If you search for Erin on the internet, there are all sorts of vague articles about her and photos, out of which not a single one is true.

Unlike her younger sister, Eve Jobs, Erin stays behind closed doors because of which there are a lot of fake photos of her on the internet. But today you’re in luck as we’ve collected only the accurate information regarding Erin, including her college, residence, wiki, net worth, and dating life. In this article, you’ll also find her real pictures and her true identity.

The Truth about Erin Siena Jobs: Who is she in reality? Her real picture and name

Writing about celebrities is pretty difficult as it is, due to the fact that they don’t share a lot of information in public. And when it comes to star kids, it becomes more complicated. The same is the case for Erin Siena Jobs.

From false pictures to fake information, there is not a single credible source that has accurately written anything regarding Erin. However, after a lot of digging, we’ve finally found all the right information you need to know about Steve’s daughter.

Video: Steve Jobs’ Daughter Erin Siena Jobs Is All Grown Up: Check Her Out

The first order of business, her name. Although the world knows her as Erin Siena Jobs, the name she uses seems a bit different. In real life, she goes by the name, Erin Powell.

Before we dive further into her social media profiles, let’s also clear the air regarding how she looks. You may have come across a lot of pictures after searching her up on the internet. Nonetheless, not a single one of them depicts the real Erin. For starters, here’s her real picture! This snap was taken back in 2010, when Erin visited Kyoto, Japan, with her father.

Well, for those who are still skeptical about the picture above, we’ve also collected proper evidence. Let’s start with an image from her childhood in which she is seen alongside her sister Eve and mother, Laurene Powell.
The above picture was shared by Eve on her verified Instagram account. The smaller one is Eve, while the other one is Erin. Notice how the childhood picture strikingly resembles her picture with Steve during their trip to Kyoto.

Meanwhile, Eve once tagged her older sister Erin in a group picture. In the post, she tagged the same Instagram profile we mentioned above. You’d think Eve would mistakenly tag someone else by the name of her own sister?!

We know a lot of you are still not buying what we’re saying here. Don’t jump the gun as we have other evidence as well. If you see the profile picture of Erin on her Instagram account, you’ll notice a widow’s peak. Well, Erin’s half-sister, Lisa Brennan, in her memoir, Small Fry, wrote about Erin’s facial features. She wrote, “She had dark hair and a widow’s peak and large, soulful eyes.”

It seems all the loose talk regarding Erin came to be due to her secretive nature.

Erin was born on August 19, 1995, to Steve Jobs and his wife, Laurene Powell Jobs. While she is the second child of Laurene Powell, she is the third kid for Steve. She grew up in Palo Alto, California, alongside her siblings. Besides, many tabloids state she was born in 1996 but clearly that is not the case.

Growing up, Erin was the quiet one in the Jobs’ household. Because of her nature, Steve rarely gave any attention to her. From her childhood, Erin decided to keep herself emotionally checked and sort of detached herself from the whole family thing. All she wanted to accomplish by doing is to not feel bad in the case her father is not around much.

In the book Steve Jobs by Walter Issacson, while talking about not receiving enough attention from her father, Erin said,

“He does his best to be both a father and CEO of Apple, and he juggles those pretty well. Sometimes I wish I had more of his attention, but I know the work he’s doing is very important and I think it’s really cool, so I am fine. I don’t need more attention.”

At the moment, Erin resides in New Orleans, Louisiana.

Now talking about her siblings’ profession, her brother Reed is into science. When his father was diagnosed with Cancer, Reed decided to do in-depth research on the subject. Several years ago, he worked at Stanford Oncology Lab where he did a lot of DNA sequencing to find genetic markers for colon cancer. Moreover, he even used his cancer study as a reference to present a report on the same topic to his class at Crystal Springs Uplands School.

As for Erin’s youngest sister, well, she is a professional equestrian. Interestingly, Even often competes with other heiresses, including Bill Gates and Steven Speilberg’s daughter, Jennifer Katharine Gates, and Destry Speilberg. Besides, she studies at Stanford University.

Aside from her two siblings, Erin’s older half-sister, Lisa is an author. Her famous book includes the memoir, Small Fry, in which she vividly talked about her relationship with the late Steve Jobs.

Where did Erin Siena Jobs go to College?

Upon completing high school, Erin moved to New Orleans and decided to study at the prestigious Tulane University. Many tabloids claim she studied at Stanford University, however, it is further from the truth. Here’s why!

Back in 2013, a thread in the College Confidential website stated that one of Steve Jobs’ daughters studies at Tulane University. Apart from this, a tweet by Campus Connection, an off-campus alternative for Tulane Green Wave merchandise, also mentioned the same thing. Take a look!

During her time in college, Erin also attended the New Orleans Decadence Festival.

We can say she is living a rather secluded life without any disturbance from the media.

One of the greatest innovators of all time, Steve Jobs took his last breath in October 2011. At the time of his death, Steve was only 56-years-old.

Steve died due to pancreatic cancer. Apparently, his death was due to a complication stemming from the previous islet-cell pancreatic neuroendocrine tumor operation.

Jobs’ death was highly publicized considering the fact that he was one of the best tech magnates of all time.

Is Erin Siena Jobs dating someone?

It looks like Erin is not dating anybody, at least according to her social media pictures. Her social media profiles are private, which contributes to her secret personal life.

On the other hand, her sister Eve has had a few relationships. The Stanford University student was once dating a guy named Aiden Reilly. As of 2021, she is in a relationship with singer, Harry Hudson.

Furthermore, Erin’s half-sister, Lisa, is married and is the mother of one child.

It is not surprising to know that Erin is also heir to Steve Jobs’ fortune. After Jobs died, he passed away the fortune to his wife, Laurene Powell Jobs. Moreover, his oldest daughter, Lisa, also received a fair share of the wealth. At the moment, Laurene’s net worth is $19.5 billion, while Lisa also inherited millions of dollars from her late father.

Talking about Reed, Erin, and Eve, all three of them will receive a boastful billion dollars. As of now, we can say Erin lives an affluent life.