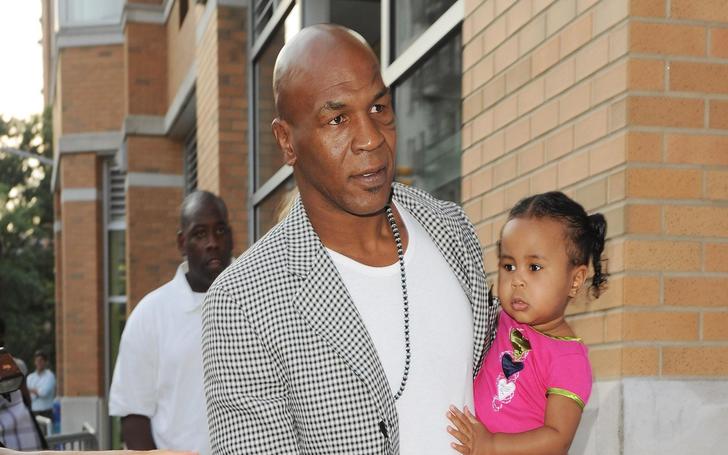 Exodus Tyson is the late daughter of boxer Mike Tyson and his ex-girlfriend, Sol Xochitl. In the ’80s, Tyson seemed untouchable, but over the years, he somehow went on to tarnish his legacy often with controversies and bad boy attitudes, and at times heartbreaking events.

Although Tyson has had many enemies on and off the ring, none even in their evil-est dream would have wanted the boxer to go through the darkest moment of his life; the untimely demise of his daughter, Exodus.
Neither the world nor Tyson and his ex-partner, Sol will perhaps ever beat the agony of Exodus’ death. Yet they are moving on the best they could and be there for their other children.  In the meantime, let’s try to relive the time when Exodus was still alive and flourishing — like any other child should be. Also, know how her loved ones coped or are trying to with her passing.

Exodus was born in March 2005. From her father’s side, she was of Jamaican descent, and maternal wise she had Mexican ancestry.
In his biography, Undisputed Truth, Mike reveals the time when Sol had just given birth to Exodus but he had no money. Tyson, himself, had paid a good amount of fine to a local guy whose car he had damaged sometime before the birth of Exodus.
With not enough money to support his family and the newborn baby, Mike urged one of his friends to find him a fight so that he could make quick money. Only this time it was against the six-foot-six inches tall Kevin McBride from Ireland. Exodus’ dad would lose the bout after the sixth round. This ultimately became Tyson’s last fight and he retired shortly after.

Exodus Tyson Lost Her Life While Playing On A Treadmill

Iron Mike and his girlfriend, Sol Xochitl, faced a tragic loss on May 26, 2009, when their little girl, Exodus, died at age 4. Their daughter became caught in a treadmill cord in her Phoenix home and died at the local hospital.

Her death is featured in a documentary, “Mike Tyson: The Knockout,” which also digs into the other aspects of his boxer’s life.

Exodus’ Older Brother, Miguel Leon, Found His Sister Tangled Up In The Cord

Miguel was only 7 when he found his sister struggling with a treadmill cord, ABC News reported. At the time, police said, Exodus was playing when she fell into the cord, which “acted like a noose.” Exodus’ father, Tyson was in Las Vegas and flew out to Phoenix as soon as he got the news. He then appeared at the hospital where Exodus was on life support before she died, the news outlet forwarded.

Leon found his sister and called his mother, who was in another room. She took Exodus off the cord, called 911, and tried to revive her with CPR.

The mother was busy cleaning the house, and Tyson’s daughter was in the playroom. Sol sent her son in to check on his sister, and found her “in distress,” police summarized. The statement further said how the mother initially thought Exodus had been electrocuted.

The little girl was unresponsive when first responders arrived and continued life-saving efforts. They immediately took her to St. Joseph’s Hospital and Medical Center, where she would ultimately lose her life at 11:45 a.m.

Exodus Tyson’s Mother, Sol Xochitl Did Her Best To Keep Her Daughter Alive; Exodus’ Mouth Was Filled With Blood

A 911 call amidst the dark event indicated Exodus’ mom “did all she could when this tragic accident occurred,” police then told E! News.
Sgt Andy Hill said Xochitl began CPR and continued until police and firefighters arrived. The call between the dispatcher and Exodus’ mother later revealed that she had found blood in her baby’s mouth. The dispatcher instructed her to clear out the blood and start to do CPR which she did.
The reports also showed Xochitl sobbing whilst still trying to resuscitate her daughter. Sol, nonetheless, would lose her shortly after taking her to the hospital.

Phoenix Police carried out an investigation on Exodus’ death and ruled that it was accidental. The law enforcers described it as “a tragic accident.” Police Sgt. Andy Hill explained,

“Either she slipped or put her head in the loop, but it acted like a noose, and she was obviously unable to get herself off of it.”

Father Tyson later issued a statement right after the death of his daughter which said,

The Tyson family would like to extend our deepest and most heartfelt thanks for all your prayers and support, and we ask that we be allowed our privacy at this difficult time. There are no words to describe the tragic loss of our beloved Exodus.

Several news outlets and people described the death as “preventable” and issued a reminder about treadmill safety.

The Times When Mike Tyson Talked About His Daughter, Exodus Tyson’s Death

Kid Dynamite called Exodus his “Angel” and told Oprah Winfrey he did not want to know how she passed away. After learning about her demise, he told: “my first instinct was a lot of rages.”

On Oprah, he said had he known, “there might be a blame for it.” The boxer added

“If somebody’s to blame for it, there will be a problem.”

With HBO’s Real Sports he recalled what went through his mind when he first heard the news. Mike said his first instinct was to grab his gun and “go crazy.” He reported he had no idea who was going to be his target but that was, as he said, “his best thinking at the time.”

All changed when he reached the hospital and saw his daughter. After that, he said he only experienced pain and agony. The former heavyweight boxing champion even turned to cocaine, saying that he needed to feel high to get through the experience.

There isn’t a single interview where Tyson hasn’t choked up when talking about his daughter. In fact, in one of those sittings, he couldn’t even finish the entire conversation.

Tyson explained his family is his “biggest asset” and added how grateful he was to have the coping mechanisms to not react violently.

How Mike Moved On With Exodus’ Death?

After resorting to cocaine to ease the anguish, late Exodus’ father, Tyson married Lakiha Spicer. The wedding took place a little more than a week after his daughter’s death.

Tyson’s family members agree Spicer has helped the former champion turn his life around and ease the pain of his daughter’s death. Tyson only smokes weed now, and he even has his own business in the weed industry. Together, Michael and Spicer have a daughter named Milan and a son, Morocco.

Mike’s other children from his past relationships include Lorna, Miguel, Rayna, and Amir. New York Times reports Tyson also considers himself as the father to Gena, who’s the biological daughter of his ex-wife, Monica Turner.

Excluding Exodus, Mike has six children and has been married three times. Exodus’ father had a number of children with a series of flings, girlfriends, and (temporary) life partners. He first wed Robin Givens in 1988. During their relationship, Givens became pregnant but suffered a miscarriage.

That marriage ended in 1989; throughout the union, Givens claimed she suffered all sorts of abuses from the boxer. After Givens, the five-foot-ten fighter started expanding his family, which would include seven children — Mikey Lorna, Miguel Leon, Exodus, Rayna, Amir, Milan, and Morocco.

Exodus’ eldest half-sister, Mikey Lorna came first, somewhere between 1990 and 1991. Lorna’s mother was Tyson’s then-girlfriend Kimberly Scarborough. Next Tyson became the father of Rayna and Amir, who were born to the boxer’s second wife Monica Turner. Then he welcomed two more children, Miguel Leon and Exodus. Exodus’ younger half-siblings are Milan and Morocco whom her father had with his third and current wife Lakiha Spicer.

Jacob Tremblay Is Close to His Parents and Sister: Some Interesting Facts