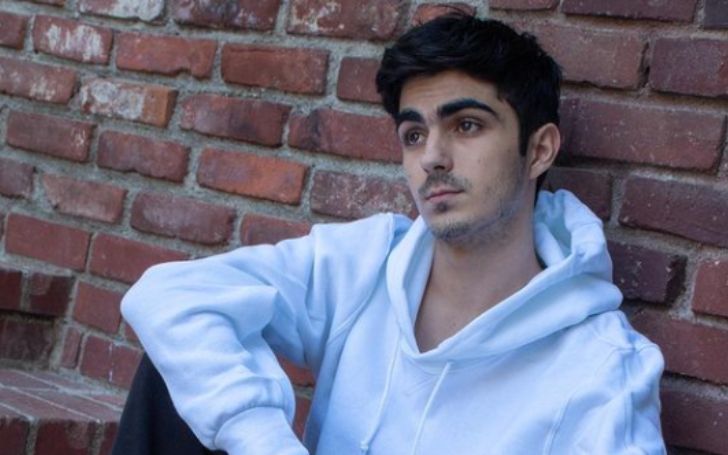 Kassius Lijah Marcil-Green is the son of the Wedding Band actor, Brian Austin Green. The actor welcomed his eldest son, Kass almost 20 years ago with his ex-fiance, Venessa Marcil. With both of his parents as actors, Kass did not want to feel left out. So, today, he is an up-and-coming actor himself.

Furthermore, 20-year-old Lijah has had quite a life from the very beginning. Did you know that his mom and dad fought for his custody? He was just a year old when they separated and the situation could not be described better than a “fiasco”. In addition, his mother also claims that her son was not welcomed in his dad’s new home with his new wife, Megan Fox. So, what is the actual reality?

Is he not in a movie co-starring his dad as well? Well, you just have to wait and read the article below to find out. This article contains all the known information about Kassius Lijah. Is it true that he is gay? Let’s know together!

Kassius Lijah Marcil-Green Was Born In 2002; Who is his mother?

He is living his best life currently but unfortunately, this was not the case during his childhood. He was just a year old when his parents separated. Furthermore, Kass was torn between his mom and dad from a very young age.

Regardless of all this, this 20-year-old kid of two celebrities is a pretty gifted child since birth. He has a mixture of multiple ethnicities because of his parents’ multi-racial background. From his father’s side, Lijah is English, Scottish, French, Dutch, and Italian. Similarly, he has French, English, German, Mexican, and Canadian roots from his mom’s side.

This American kid who is one of the up-and-coming actors of today studied Theatre Arts and Acting in college after high school.

Details On The Custody Battle Between His Parents; It Was Not Sorted Until 2022

As mentioned above, Kass’ parents separated only a year after his birth. And clearly, it did not go well for the Marcil-Green family. His parents were not even together at the time; they were just engaged and things got pretty dirty. Even more so, the custody fight was not even settled till 2022.

Both of Marcil-Green’s parents have different viewpoints regarding child support. Since their son was just a year old, his custody was of course given to his mother. But, in 2021, Venessa claimed that her ex-fiance used to drag her into court multiple times asking for their son back.

However, this claim was later denied by Kass’ dad. According to a post on Brian Austin’s Instagram, he was just a “respondent” in this battle. Furthermore, he also shared a screenshot citing his ex-partner as the “petitioner”.

The actor’s response was acknowledged by a number of his fans. Nevertheless, the one person who should have said something about it i.e., Lijah’s mom, did not utter a single word after this.

According To His Mother, Kass And His Dad Do Not Have A Good Relationship; What’s The Truth?

According to an interview given by actress, Venessa Marcil, her son, Lijah was cut off from his dad’s life after her separation from him. As it turns out, the actor and his then-wife, Megan Fox did not allow Brian’s eldest son to even meet his half-siblings. In addition to this, his room from his dad’s home was also removed.

This claim by Kass’ mom surfaced when he was just 16 years old. It changed the public’s views about the actor being a really caring father towards all his kids.

Furthermore, this is what his mother had to say about her son’s relationship with his biological dad,

“Kass no longer has a bedroom at their house starting 5 years ago. He hasn’t ever seen Megan again or met his youngest brother. He’s not allowed to know where they live anymore. Isn’t invited to see them on holidays. Not even Father’s Day. They threw out his entire room and gave away his cat without Kass knowing.

This sure was a very saddening and heart-touching interview that Venessa Marcil gave.

On the contrary, Brian Austin seems to have grown closer to his son in the last couple of years. How, you ask? Well, we will discuss that in the next topic.

Young Marcil-Green Followed His Parents Into Showbiz; He Is An Actor

We all must be aware that both of Kass Lijah’s parents are actors. His dad, Biran Austin is best known for his role in the TV series, Beverly Hills, 90210. On the other hand, his mother is famously known for her remarkable performance in shows like General Hospital and Las Vegas.

Therefore, like his famed and celebrated parents, Kass has also recently entered showbiz. According to some sources, he is known for two shows, The Night They Came Home and Normal British Series. He was also the lead actor in the 2018 theatre show, Aladdin. The show was featured at The Road Theatre on Magnolia in North Hollywood.

However, in addition to these, he has also had roles co-starring his dad.

In 2022, Brian Austin shared a photo with his son. The photo was from the set of one of the father-son duo’s film projects. In the caption, the actor wrote,

“Another one of Kass and I from the set of ‘Rufus’.”

The picture was posted on 13th October 2022 which clearly showed them together in “period” clothes while filming for the project.

Moreover, this totally contrasts Marcil’s views regarding how Kass’ dad did not care about him after the separation. Regardless, we are happy that they finally came so close together and Kassius Lijah became an actor like his dad.

Is Kassius Lijah Marcil-Green Gay? Who Is He Dating?

This aspiring actor, who is just 20 years old, is openly gay. Furthermore, while coming out to the public, Kassius proved that he does not have a thing for anybody of the opposite sex and is attracted only to guys.

So, the question here is, who is Lijah’s boyfriend? If you stalk this actor’s Instagram enough, you can find the answer yourself. However, for now, we will tell you who the lucky guy is.

Kass is in a loving relationship with Ian Ward. These young guys have been together since 2019 and the relationship is still going on strong after 4 years. Moreover, Lijah Marcil also frequently shares cute pictures with his boyfriend on Instagram. Their relationship surely seems to be an inspiration to lots of people.

His Parents Moved On With Different People After The Separation

Both of Lijah’s parents have moved from one person to another since they separated in 2003.

Following the break-up, his father, Brian Green, started dating the famous, Megan Fox. They met in 2004 when Kass’ dad was 30 and Fox was just 18 years old. Their relationship had a rough beginning because of the huge age gap, however, they did marry each other afterward; but it was an “on again off again” for them both. Even more so, their marriage only lasted for 10 years before separating in 2020.

Right after this, Brian started seeing a professional dancer named Sharna Burgess. Their relationship began in October 2020 and they are still together to this day.

Similarly, Venessa Marcil is no less. In 2010, the actress married Carmine Giovinazzo. These two were together for 2 years before their divorce in 2012. After this, Marcil again got engaged to MC Martin, Deputy Sheriff from California. As of today, we do not know if she is married or even together with this man.

Kassius Lijah Marcil-Green Is The Eldest Son Of His Parents; How Many Siblings Does Kass Have?

As you all may know by now, Kassius Lijah is Brian and Venessa’s eldest son. So, how many siblings does he actually have? It is true that he is the only child of his parents but Kass does have other half-siblings.

His father, from his marriage with Meghan Fox, has three sons. Journey River, Bodhi Ransom, and Noah Shannon are three of his half-brothers. Similarly, he has a 4th brother too – Brian and Burgess’ son, Zane Walker Green.

Unfortunately, Kass does not have any half-siblings from his mother’s side. According to many courses, Venessa suffered multiple miscarriages until she finally gave up on carrying a second child.

What Is Kass Worth Today?

Since Kass is just an aspiring actor now who is making his own name in the film industry, it will take him a long time before he earns multi-million dollars. Meanwhile, his dad Brian has a net worth of $8 million.