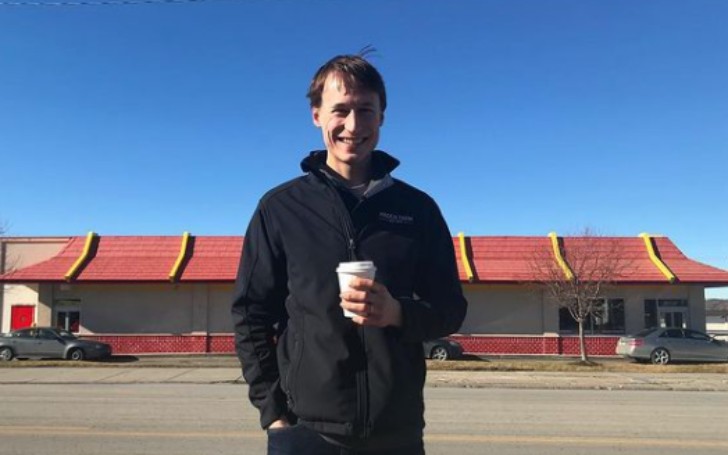 Nick Hagen is the husband of cookbook author and TV host Molly Yeh. He is currently involved in farming on the farm he inherited from his ancestors.

Girl Meets Farm star Molly Yeh is a known face in the American household. Initially starting out as a small-time food blogger in 2009, Molly never knew she would become this big of a celebrity one day.

Besides, the beauty is in a blissful marital relationship with Nick Hagen. Over the years, curiosity regarding her hubby Nick has been high. We all wanna know, who is he? what does he do for a living? among other things.

Well, today we’re going to lay out all that you need to know about Molly Yeh’s husband Nick.

Who Is Nick Hagen?

He was born in 1987 and brought up in Grand Forks, a city right on the border between Minnesota and North Dakota. He is the son of Roger Hagen. Moreover, he has one brother. Nick’s mum is into cooking as well, just like his wife. She even gave her church cookbook to her daughter-in-law to help her in recreating dishes.

Aside from this, there hasn’t been any mention of Molly’s in-laws on her social media account. It seems she wants to keep her family’s privacy at bay.

Yes, his wife Molly was also a student of the Julliard School. Both of them majored in music and were a part of the university’s orchestra group. Apart from being a fifth-generation farmer, Nick is a well-versed trombone player.

He is a Sugar Beets Farmer and a trombonist

Well, talk about being a multi-talented personality. In addition to being a sugar beets farmer at his family’s farm in Grand Forks, Nick also plays for UND’s orchestra.

Nick’s family has been involved in sugar beets harvesting for the past five generations. He has, in fact, tattoed a sugar beet in his arm, something which really made Yeh fall in love with him. Besides, after finishing college, Hagen moved back to this farm and started living out his passion as a farmer.

He is a devoted farmer and works round the clock to ensure everything is up to order. Whenever it’s harvesting season, Hagen spends more than 16 hours a day working in the field.

It was his multi-talented personality that attracted Molly Yeh

To be fair, his interest in music and farming really contributed to the fact that he got Molly as his wife. At first, he met his wife while they were a part of an orchestra back in Julliard. Moreover, when Nick left the city life for farm life, Molly was more attracted.

In an interview with Grand Forks Herald, while talking about the big move to Grand Forks from New York City, Molly said,

“There was this weird, uneasy feeling when I was in New York of always feeling like I had to be going out because that’s just what people do. I like not having that feeling here. I like the small-town vibe, I do like that everybody seems to know everybody. I’ve never lived in a world without traffic. That was something I didn’t expect coming here. Not having traffic makes your life better.”

In addition to her own volition to move to the small city, Molly’s hubby Nick also had a big hand in influencing her decision. It was him who first brought the idea of moving from NYC. Upon hearing the proposition, Molly thought she could spend her days blogging and cooking with the freshest of ingredients from their very own farm.

Nick’s farm life with his wife and daughter

After dating for several years, their big day came in the year 2014. They tied the knot on 27th December 2014, a few days shy from new Year’s eve. The beautiful wedding ceremony took place at Nick’s farm.

As for the guests, well, aside from both sides of the families including Molly’s mom Jody Yeh, many of their mutual friends were in attendance. Now moving towards the food items, well, Molly was involved in each and every single one of them, especially the cake, which she baked herself. Other than that, the majority of the ingredients came straight from their farm.

On March 30, 2019, Nick and his wife Molly became a parent for the first time. Molly gave birth to a girl who weighed 7 lbs., 6 oz at the time of her birth. The pair decided to name their first-born Bernadette Rosemary Yeh Hagen. The moniker is a nod to both sides of the family.

How much is Nick’s net worth?

As many would like to imagine, being a farmer doesn’t necessarily mean your overall wealth is low. As it turns out, a farmer in the United States can earn upwards of $60,000 a year.

Nick here owns a huge land and his family has been involved in farming for centuries. Therefore, we can assume, he has a sizeable amount of money. Meanwhile, his wife who has wide varieties of work has a net worth of $8.5 million.