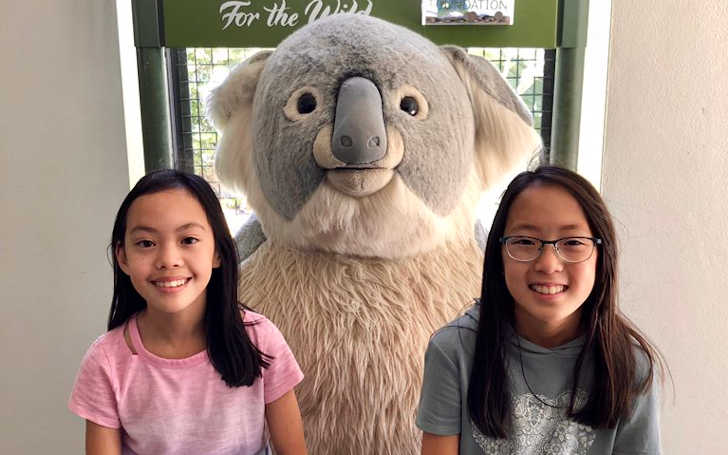 Alexa Jeong is the daughter of famous American actor Ken Jeong. Her father Ken is famous for his role in 2008’s The Hangover film series where he portrayed Leslie Chow. Besides, Ken is also well known for his roles in the NBC series Community, and the ABC sitcom Dr. Ken.

Talking about Alexa’s mother, she is a family physician while her father is a former internal medicine physician. Well, despite being the daughter of a well-known actor, many people are unknown of Alexa’s identity. She doesn’t indulge in making her media appearances too often. So, it is normal that many of Ken’s fans have been eager to know about what his daughter Alexa is doing currently. Is she following in her father’s footsteps?

Here’s everything you need to know about Alexa Jeong.

Alexa was born to Ken Jeong and Tran Jeong on May 26, 2007, in California. She is 15 years old as of 2022. Alexa has a fraternal twin sister Zooey Jeong. Talking about her nationality, she is an American by birth and has Asian roots.

Both her parents belong to Asian ethnicity as Alexa’s paternal grandparents were from South Korea while her mother has a Vietnamese lineage.

Alexa and her twin sister Zooey, both are in high school as of 2022. Their father hasn’t revealed much about their school or academics, however, back in 2015, he revealed during one of his television appearances that his daughters were in third grade. So, it is safe to say Alexa is in her sophomore year.

Besides, the doting father also revealed Alexa was into gymnastics and she had just joined a gymnastics class back then.

On the other hand, Alexa’s mom is a family physician licensed in California. She earned her M.D. from the David Geffen School of Medicine and has been practicing medicine for over two decades. However, it’s a bit unclear if she has been working as a full-time doctor following the birth of her children. It’s because Tran was diagnosed with cancer when her children were one year old, and it took her a couple of years to recover.

Ken and Tran Jeong had just welcomed their twin daughters a year ago and they were happy to experience their first parenthood together. But, the husband and wife were shattered after Tran was diagnosed with a highly aggressive form of breast cancer. The diagnosis was devastating for the family, especially for Ken.

Ken revealed that he was too scared to think about what would happen if his wife left them too soon. He was also concerned that how would he tell this to his children if Tran wouldn’t survive. Meanwhile, back in 2011, on the occasion of Mother’s Day, Ken paid a heartfelt tribute to his wife in a lengthy blog in the Huffington Post.

In the blog, Ken praised his wife for being so strong throughout her treatments. He wrote,

“She fought back against cancer with everything she had for our girls so that they would grow up knowing a mother’s love, a mother’s instinct, a mother’s touch.”

Finally, after sixteen chemotherapy sessions, a mastectomy, and radiation, Tran Jeong became cancer-free in 2010, nearly two years after her diagnosis, and lives a healthy life as of now.

Alexa’s parents Ken and Tran Jeong have been together for more than two decades. They started dating in 2002 after hitting it off in their first meeting at Kaiser Permanente. After around two years of courtship, Ken and Tran exchanged vows in September 2004 in a privately organized wedding.

The pair lived a couple of years as a married couple before they added two new members to their family. It was May 26, 2007, when the pair experienced their first parenthood welcoming two fraternal twin daughters.

In their twenty years-long partnership, Tran and Ken both have supported each other through their ups and downs. We all know Ken always stood by his wife’s side when she was struggling for her life, however, very few of us might know that Tran has been an inspirational person in Ken’s life and his career in acting.

Tran Jeong Encouraged Her Wife to Pursue an Acting Career

Ken used to be a professional doctor and he is still a licensed physician. But, he decided to pursue his dream career in acting a long time after he started practicing medicine. As a matter of fact, he started acting during his sophomore year at Duke University. He even considered majoring in drama, however, focused on his pre-med coursework.

Ken continued to work in some artworks while he worked as a doctor and in 2006, he decided to pursue a full-time acting career. His wife Tran’s role in him pursuing his dream is unforgettable.

Tran always encourage him to follow his dream and even when she was battling cancer, she always encouraged him to continue his work which ultimately helped him to succeed as an actor. Ken has acknowledged time and again that his wife was the one who motivated him to take his famous role in The Hangover film series.

He took the role when Tran was going through her cancer treatments and at the time Ken didn’t want to leave her alone and go shooting. However, Tran insisted he should take the offer and go for the shooting.

Is She on Social Media?

Well, Alexa might be active on social media, but she isn’t active publicly until now. But, as per her father’s conversation with Ellen DeGeneres back in October 2020, it appears that both Alexa and Zooey have social media accounts. Besides, Ken also jokingly told Ellen that his daughters don’t think he is a cool dad and had blocked him on Instagram and muted him on Twitter.

Alexa is just 15 as of 2022, and it is probably a few years before she pursues any specific career. But until now, she hasn’t shown any interest in following in her father’s footsteps. Rather, she and her sister both are inclined toward her mother’s profession and want to be a doctor in the future.

Ken said in a conversation that his daughters wanted to be like their mommy. In his own words,

Well, only time will show if Alexa will choose to become a doctor or finds any other job more preferable for her.

Well, as we mentioned earlier, Alexa is 15 years old and is attending high school currently. She is still a few years from starting her own career and starts earning money. So, at present, we can safely say Alexa lives with her parents and her twin sister at their lavish home in Calabasas.

Alexa’s parents own a $3.95 million home in Calabasas, California which they bought in 2016. The house has more than 6,700 square feet of living space and consists of well-designed rooms and a modern chef’s kitchen.