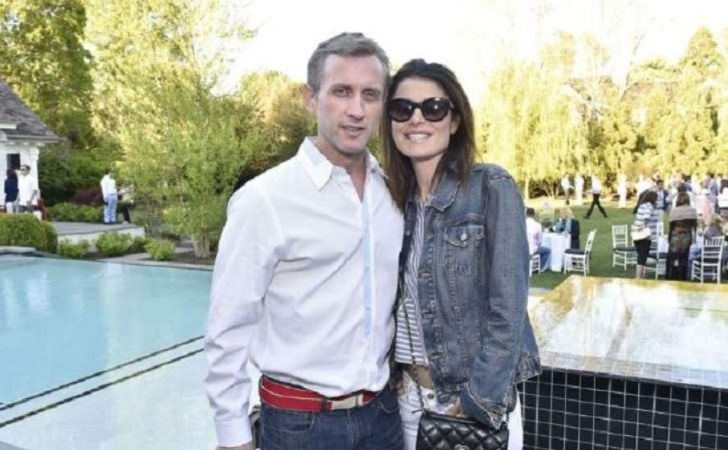 Florinka Pesenti is a businesswoman who has wide experience in the world of public relations. She currently serves as a Vice-President for the diversified holding company MacAndrews & Forbes.

Read the full article to know more about her parents, siblings, career, and a lot more.

Florinka Pesenti is famous as the girlfriend of Dan Abrams. Besides, Pesenti is also the Vice-President of MacAndrews & Forbes, a well-established multi-business company owned by billionaire investor Ronald Perelman. She joined the company back in July 2018.

Born on 17th Jan 1979, in Milan, Italy, Pesenti moved to New York City at the mere age of five with her parents. The family settled on the Upper East Side.

Her Italian father worked as a photo editor. She grew up along with her younger brother Viktor. She holds American nationality.

Florinka did her schooling at Fieldstone school. She later went on to enroll at Vassar College.

Pesenti started off her career working in the fashion department of Glamour Magazine in 2002. She left the job after three-year of association with the magazine.

Later, Florinka worked as the director of public relations for an Italian shoe & leather goods company, TOD’s. She worked there for nearly a half-decade from Jan 2005 to December 2009.

In early 2010, the multi-talented lady went on to join a renowned fashion company GUCCI. She worked there until Jan 2016.

According to her Linkedin profile, Florinka then started working as a vice president of Ralph Lauren Corp. There she was mainly responsible for luxury collections and also used to handle special events and celebrity relations. She is currently the vice-president of MacAndrews & Forbes. She has been working in the position since July 2018.

Pesenti is the winner of The Amazing Race 3

Pesenti teamed up with Zach Behr on the third season of the hit reality TV show The Amazing Race. It aired on 2nd October 2002 and ended in December of the same year.

Eventually, Pesenti won the show with Behr, making her the first female winner in the history of the show.

Pesenti is dating Dan Abrams for over a decade now. The couple was first introduced through a mutual friend at a celebration of “The Hunger” a memoir by John DeLucie in 2009.

Although the two had already met a few times before, Dan apparently couldn’t recognize his then future-girlfriend Pesenti.

The two were instead in their respective relationship until their romance began which is still going pretty well.

Do they have any children?

Florinka Pesenti and her loving bae Abrams are the doting parents of a child. They welcomed their son, Everett Floyd Abrams in 2012.

Talking about his Parenthood to The New York Times, Dan said,

“Parenthood has added an enormous amount to my life. Now I see everything through the prism of my son”

He has also posted several photos with his kid on social media. While talking about their future relationship goal, they have yet to reveal their future plans.

They got together romantically during their time on the show and continued after the Race ended in late 2002. Pesenti and Riker attended several big functions throughout their romance.

However, their relationship didn’t last long and they reportedly separated in 2009.

On the other side, Pesenti’s longtime partner Dan was also romantically linked to several women before she came into his life. He dated actress Elisabeth Rohm from 2003-05.

After their split, Dan began dating the political correspondent Jamie Murray in 2007. They broke up in the following year. He subsequently moved on with Elle Macpherson and Renee Zellweger.

Florinka Pesenti Net Worth and Salary

Sources suggest that Florinka has a net worth of $15,000,000. She has collected a large part of her wealth from her various endeavors, especially her role in PR. The average salary of the Vice President of public relations is $44,836.

What is Her Boyfriend Dan Abrams’ Net worth?

As per an estimation made by Celebrity Net Worth, Abrams has a $25 million net worth as of 2021. He is the Chief Legal Affairs Anchor for ABC News. He also serves as a host of The Dan Abrams Show: Where Politics Meets The Law.

Dan previously hosted the hit cable show Live PD on the A&E. The man with diverse knowledge also held several high posts. He became an anchor of Nightline, a late-night television news program on ABC News in June 2013. He currently works as a legal commentator and author for the show.

Florinka and Dan’s Investments: Listed their NYC Townhouse for sale at $8.8 million

As per Variety, Dan Abrams listed his duplex located in New York City on the market with an asking price of $8.779 million in early 2018. A custom-renovated triplex condominium spreads out in 3,256 square feet and boasts 4 bedrooms as well as 3 full and 2 half bathrooms.

As per the source, Dan acquired the property in two separate transactions. He bought the first one in July 2006 and a second in 2009 for a total of $3.82 million.

Other Interesting Facts about Florinka Pesenti