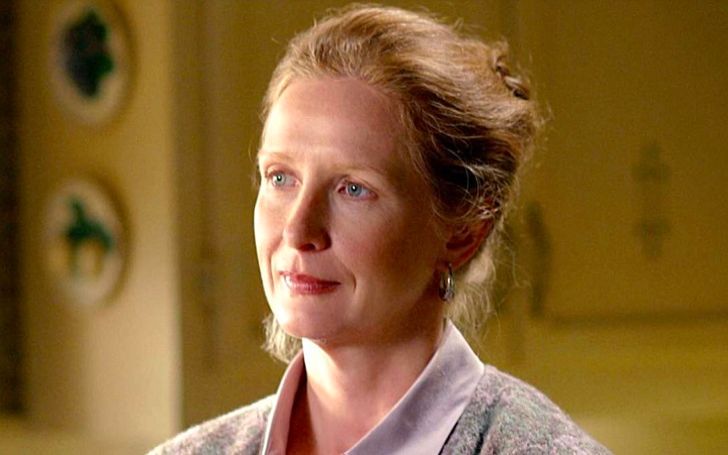 Actress Frances Conroy has a diverse career in the entertainment business. The versatile artist has performed effortlessly in multiple genres from television to movie to theatre with over 100 credits under her belt.

Conroy gained global fame after her role as Ruth Fisher on the TV series Six Feet Under. She also played Eileen Wood in four episodes of the hit Netflix Dead to Me in 2020.

The actress has been married twice. Well, here we will try to find out all the unexplored aspects of her life including her disfigured left eye, parents, movies and TV shows, and more!

Frances Conroy is From a Working-Class Family

Conroy was born on 15th March 1953, in Monroe, Georgia. She is the daughter of Ossie Hardman and Vincent Paul Conroy. Her father worked as a business executive. She grew up in Georgia.

Has a Mixed Ethnical Background

Frances Conroy holds an American nationality and belongs to mixed ethnicity. Her father was of Irish-American descent and her mom is of English-Irish ancestry, born to parents Harry Anderson Ray and Myrtle Mobley.

Frances Conroy Career: Involved in Showbiz since Her school days

Conroy attended Dickinson College in Carlisle, Pennsylvania. At the time, the then hoping performer featured in several college theatrical productions. She later made her move to New York City and took drama classes at the Neighborhood Playhouse.

Conroy later enrolled at the Juilliard School and studied acting under John Houseman and Marian Seldes. She was there a part of its Drama Division Group 6 from 1973-77. The group also included a long list of renowned stars such as Kevin Conroy, Kelsey Grammer, and Robin Williams as well.

Frances crafted her acting skills by appearing in various plays. She played Desdemona in a production of Othello. She subsequently became part of several other theatre projects such as The Lady From Dubuque, Our Town, The Little Foxes, and more.

The actress already gained a lot of fame for her flawless performance in several movies and TV shows. But Frances’ role as emotional family matriarch Ruth Fisher who tried to create a new, independent life in the smash-hit TV Six Feet Under brought her mega success.

Frances appeared in the project from 2001-05 and won many awards and accolades. For her role in the series, Conroy received a Golden Globe Awards, three Screen Actors Guild Awards as well as many OFTA Television and Primetime Emmy Awards nominations.

In 2008, the accomplished entertainer appeared as Virginia Hildebrand, a rich woman in ABC’s Desperate Housewives.

A year later, Frances went on to play Loretta Stinson, mother of the womanizing playboy Barney Stinson (played by Neil Patrick Harris) in How I Met Your Mother. She worked intermittently in the series until 2014.

Frances is best known for American Horror Story and Joker

Conroy gained widespread fame after her multiple roles in the cult-hit TV series American Horror Story. Her popularity further increased when she played Penny Fleck in the blockbuster movie Joker (2019).

The movie’s actor Joaquin Phoenix won an Academy Award for his title roles.

What happened to Frances Conroy? Lost Her Eye in a Car Accident.

The actress once had a terrible car accident that damaged one of her eyes so much that the actress needed surgery. After the surgery, her eye was healed however it made her cornea discolored.

While shooting for the first season of American Horror Story, director Ryan Murphy specifically asked her not to cover her eye as it will add to the realism of the scene.

Conroy also played Eileen Wood in Dead to Me

In 2020, Frances Conroy snagged the role of Eileen Wood in Netflix’s dark comedy series Dead to Me. She played the mother of semi-identical twins Ben and Steve Wood (both portrayed by James Marsden) in its four-episode.

Frances has been Married Twice: Who is Her Husband?

Frances Conroy first married her husband Jonathan Furst in 1980. The former couple always kept their romance out of the spotlight. It is yet to be revealed when the two got divorced.

Conroy tied the knot for the second time with Jan Munroe in April 1992. The two have been together since their marriage. Despite their years-long togetherness, they yet to have any children.

Her hubby Munroe is also an actor who appeared in the hit movie Ford v Ferrari (2019).

Her Net Worth is in Millions

According to Celebrity Net Worth, Frances Conroy has an estimated net worth of $4 million as of 2021. Her acting career has played a major role in her journey to multi-millionaire.

Sources report Conroy was paid $40,000 per episode for her role in American Horror Story.