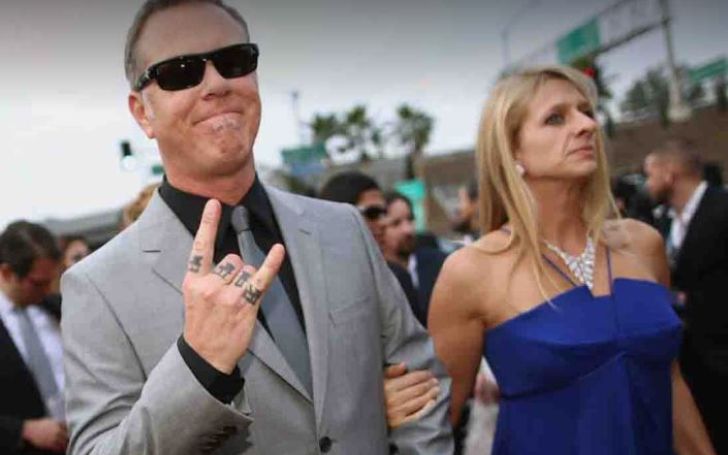 Francesca Hetfield is a former costume manager for the heavy metal band, Metallica. She is also known as the wife of the band’s frontman, James Hetfield. Hetfield has been married to the heavy metal rockstar, James since the late 90s; together they are also parents to three children.

Francesca and her longtime partner, James Hetfield are quite a private couple. The duo despite being together for so many years and often the topic of discussion among metal fans and others has rarely appeared for interviews or any public events. Tomasi, nonetheless, happens to be one of the most important people in James Hetfield’s life; something that the Master Of Puppets singer has admitted himself numerous times. He credits her for the man he’s grown up to be.

Read more about the Argentinian-born American former wardrobe manager, Mrs. Hetfield in the rundown below; know all about her history, how she came to be James’ wife and her current line of work.

Francesca Hetfield Came From A Family Filled With Macho Men

She was born Francesca Tomasi in Rosario, Argentina in Jan 1970. She belongs to the Argentine ethnicity and has American nationality.

Nothing much about the Grammy winner’s wife’s early life or family has been put into words. James, however, during an interview with Independent, in late 1997, revealed his wife, Francesca came from a macho family where the men in her family demanded their dinner on the tables.

In light of that, Hetfield at the time also said his spouse had a rather difficult time adapting to her American artist husband in the beginning.

Francesca Hetfield Grew Up In Colorado

Although she was born in Argentina, Francesca has been reported to have grown up in Vail, Colorado.

The now 52 years old, Francesca is also reported to have gone to Overland High School, Colorado from where she graduated in 1988.

She apparently identifies the place at the base of Vail Mountain as her hometown. Francesca reportedly has also lived in Aurora, Co.

Her parents further are rumored to have resided in Rosario, Santa Fe, Mexico.

What Does Francesca Hetfield do?

As mentioned, Francesca, in the past, was an ordinary costume designer for her husband’s band, Metallica.

As for now, however, it is only up to the insiders as to what the blonde Latina has been doing when it comes to her professional front.

Some suggest she is mostly busy helping her husband, James with the behind-the-scenes works of Metallica.

Francesca Relationship With James Hetfield; When Did They Meet Each Other?

Tomasi married the speed metal artist, Hetfield in mid-Aug 1997. They allegedly met around the year 1992 after which they dated for five years before tying the knot in 1997.

When she met the ESP guitar endorser, Francesca at the time used to work at Metallica’s wardrobe department on tour.

After the wedding, the couple would become parents to three children. They had their first child, Cali Tee Hetfield in June 1998, then Castor Virgil Hetfield in May 2000, and Marcella Francesca Hetfield in Jan 2002.

When their kids were still young, Francesca and the Enter Sandman singer used to live on the latter’s 500-acre spread in San Rafael, California.

James is an artist who sings in way over authoritative and manliest voice. He, however, in 1997 while talking to Independent UK revealed everything in his household, between him and his wife, Francesca was very 50/50.

Hetfield said his partner just didn’t belong to the kitchen only, barefoot and pregnant. The Sad But True singer revealed he also didn’t belong to garage mending whatever he as a man was supposed to.

James said the mother of his children nonetheless liked going to the garage purely out of her own interest. The Kill Em All artist believes everyone should be treated equally.

James Says His Wife, Francesca Is The Most Amazing Wife; She Helped Him Get Rid Of His Alcohol Addiction

James rarely talks about his wife and children but when he does mention them, the Downey-born singer has always thanked and admired them, especially his longtime partner and wife, Francesca.

During his interview with Metal Head Zone in March 2018, James said,

My wife, Francesca, has been the most amazing person in my life. She has ridden the big waves with me. We have gone through some extremely difficult things and come out stronger.

The 59 years old further added how Francesca stuck with him through all the hell. He also revealed when he met her he knew then and there that she came into his life to help him out of the hell hole he was in. And the thrash metal singer said she did save him.

James also said how at times Francesca stood up for the family and told him that he had got to get out of the house and got to get himself together.

She warned him by telling him how she wasn’t going to submit herself and her kids to him if he continued to be an alcoholic.

In the past, Hetfield had a problem with alcohol addiction for years. The ex-Leather Charm member revealed it during an interview with Joe Rogan on The Joe Rogan Experience.

Francesca Once Kicked James Field Out Of Their House

The South American-born, Francesca apparently also kicked the guitarist out of their house, in addition, to strictly warning him that she and the kids would leave him if he continued to be a drunkard.

Hetfield says he was scared after that and because of that, he managed to get sober.

The Downey High School graduate admits what his wife did back then was the right thing.

My wife did the right thing, she kicked my ass right out of the house and that scared the s—t out of me. She said, ‘Hey, you’re not just going to the therapist now and talking about this, you’ve got to go somewhere and sort this s—t out,’ so that’s what I did …

James says the fear of losing his family shook him deeply yet it was a huge motivation for him to abandon his past issues.

Fear is a great motivator … quote

said the Fade To Black singer to Marin Independent.

He finally got rid of his habit after joining a rehab program and began his total abstinence from it in 2001.

Years later, the Gibson Explorer user would relapse and once again check himself into rehab in 2019. Because of this, Metallica also had to cancel their Australia/Newzealand leg of the WorldWired Tour that year.

Once while talking to NPR’s Fresh Air, James said Francesca also helped him to mature. She in addition also taught him to manage his bad temper more constructively.

How Rich Is Francesca Hetfield; Is She Rich Herself?

For someone who is considered one of the greatest metal vocalists of all time and the producer of numerous hits, Francesca’s husband is undoubtedly rich. His more than $300 million net worth, beyond any doubt, ranks him among the richest artist.

In addition to nine-figure wealth, Hetfield is also the owner of several massive properties across the states. What’s more, his possession also includes an art collection reportedly worth around $12 million. Despite the aforesaid discussed figures, Tomasi’s husband, James, however, is still not the richest Metallica member. That title apparently belongs to the band’s Danish-born drummer and co-founder, Lars Ulrich who has a net worth of over $350 million.

On the other hand, the likewise details regarding Hetfield’s wife, Francesca have always been a brain teaser. While she certainly has a lifestyle around wealthiness, whether or not she is also a millionaire is an ageless mystery.