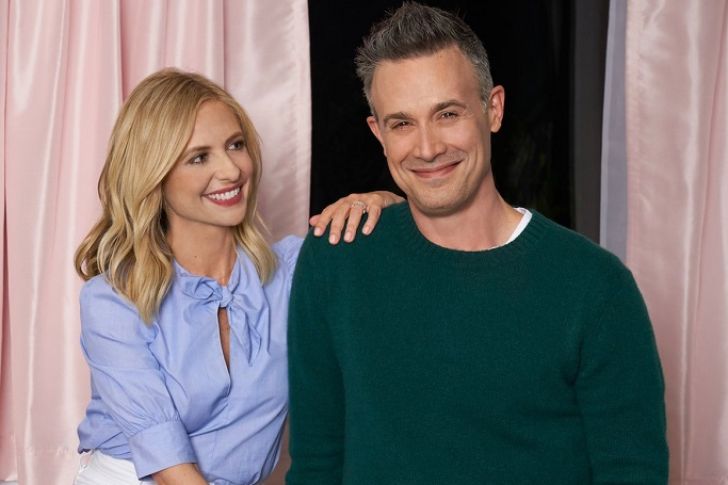 One of the prominent figures who belong to the entertainment industry Freddie Prinze Jr. is mostly notable for his critically acclaimed role in I Know What You Did Last Summer (1997).

Apart from his professional goals, the actor is known for his long-time married life. Prinze Jr. has been in a beautiful marital relationship with his wife Sarah Michelle Gellar for nearly two decades. Freddie Prinze’s wife is also an actress.

In honor of the Hollywood power couple’s enduring married life and their staunch support to each other to win over the toughest of times, here’s a look at their adorable love story and envy-inducing relationship.

The first Freddie Prinze Jr. first came across with his then future-wife Sarah Michelle Gellar while filming, I Know What You Did Last Summer (1997). But the two weren’t quite ready to start dating yet.

“We were friends for two years before we ever went out on a date. She knew what kind of guy I was, what my morals were, what my priorities were, and vice versa. We already knew all the faults about the other person.”

It was also the first project they worked on together. Freddie appeared as Ray Bronson while Sarah played Helen Shivers in the movie.

They Went Public With Their Relationship in The 2000s

Their first date was a pure coincidence as Freddie and Sarah went out to have dinner with friends but it turned into a date.

In an interview with US Weekly, Sarah told,

We were supposed to have dinner with a friend of ours, and she didn’t make her plane, so we went anyway. We’d had tons of dinners before and for some reason, it felt different that night. Organically, it just transitioned into something else.

The same night, the two also shared their first kiss. As for their engagement, Freddie proposed to his then-girlfriend Sarah after dating for over a year in April 2001.

The Two Played Each Other’s Love Interests in ‘Scooby-Doo’

Their portrayal of each other’s respective love interests in the iconic movie Scooby-Doo further fueled their burning romance. Sarah played Daphne Blake, the girlfriend of Fred Jones (portrayed by Freddie) in the film.

The couple also reprised their characters in its sequel Scooby-Doo 2: Monsters Unleashed in 2004. Furthermore, they rendered their voices for the 2007 animated feature Happily N’Ever After.

Adam and Gellar also worked together in the hit supernatural drama series Buffy the Vampire Slayer.

When Did They Get Married? Their Wedding

Freddie Prinze Jr. tied the knot with his wife Sarah Michelle Gellar, on 1st September 2002. They exchanged the vows at a spectacularly bohemian wedding ceremony held in Puerto Vallarta, Jalisco. It was officiated by the director and choreographer, Adam Shankman.

The power couple first planned to organize their wedding at the El Careyes resort, in Mexico. However, their outdoor nuptials plan couldn’t succeed after Hurricane Hernan made a visit. The very next day, a 4.6 magnitude quake also shook the entire country, further canceling their wedding plans as well.

Well, it looks like the threatening sign of Mother Nature was the blessing for the duo. As even after years of married life, they are yet to show any signs of slowing down. Furthermore, their commitment to each other looks like it’s never been stronger.

Meanwhile, Sarah also illicitly changed her name to Sarah Michelle Prinze on the occasion of their fifth marriage anniversary in 2007.

They Are Blessed With two Kids

Freddie Prinze Jr.’s wife gave birth to their second child, a son, Rocky James Prinze on September 19, 2012. The two announced they were expecting their second child back in April 2012. Luckily, both of her children celebrate their birthday on 19th Sep.

Sarah and Freddie are doting parents to their two kids. They even vowed they would never appear on-screen together. When Entertainment Tonight asked Sarah if she would ever work with her husband in the film, she replied,

“I doubt it because then who’s home with the children?”

Freddie and spouse Sarah are Passionate About Cooking

The two are both foodies and have a strong passion for cooking also. They even released cookbooks Back to the Kitchen: 75 Delicious, Real Recipes (7th June 2016), and Stirring up Fun with Food (18th April 2017) respectively.

On the other hand, Freddie Prinze Jr.’s wife Sarah is also a co-founding member of Foodstirs which makes organic baking mixes and kits for families.

What is the key to Their Enduring Relationship?

Freddie and Sarah are one of the beloved couples in the industry. Freddie’s spouse told Us Weekly what makes her marriage to Freddie work,

The duo usually does a lot of romantic stuff together. Like for instance, they danced to the song ‘Something to Watch Over Me’ in the honor of their 13th wedding anniversary. Besides, they share a deep love for food. Prinze and Gellar both are gourmands as well as passionate about cooking.

We wish all the best for the loving Hollywood couples.

Freddie Prinze Jr. previously dated his ex-girlfriend Kimberly McCullough. The former couple first came across while McCullough was on General Hospital in the early 1990s. They started dating in 1995 and broke up after four years of relationship in 1999.

Talking about his wife Sarah’s past relationship, the actress was once linked with David Boreanaz. They reportedly went out from 1998 to 99. Afterward, Sarah also hooked up with her Scream 2 co-star, Jerry O’Connell.

Who is Sarah Michelle Gellar? Her Married Life With Freddie Prinze Jr.