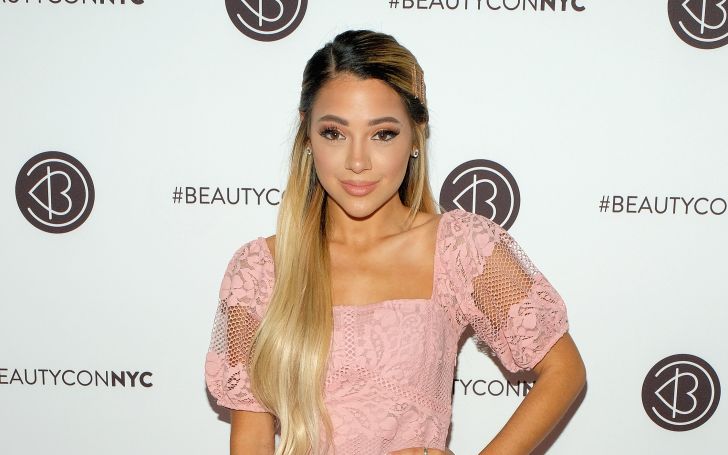 Gabi DeMartino got her start on YouTube back in 2010 when she started a joint channel with her twin sister, Niki. Since then, she has become a big fashion and beauty blogger.

The 24-year-old has two other siblings apart from Niki and one of them is an accomplished actor too. Find out more about her family, career, and net worth.

Gabi DeMartino Family and Siblings: Grew up in an Affluent Household

Many of you might not know that Gabi grew up in an upper-middle-class family. Her grandfather Dr. Gaeton J. DeMartino, who enlisted as a Dentist in the US Army started the DeMartino Dental Group P.C., back in 1961.

Later on, Gabi’s dad, Jeffrey DeMartino joined his father as a practitioner at the Dental Group back in the late 80s. He was joined by his future wife and mother of his four kids, Nélida Garcia.

Dentists are one of the most sought-after professionals in the world so it is evident Gabi had an affluent upbringing. Her parents run their private clinic from Phillipsburg, New Jersey.

We all know Gabi and her twin sister, Niki as big YouTube stars and just like them, their other siblings are a big name on their own. The eldest DeMartino, Alessandra or Alex, is an actress. The 26-year-old is famous for her role in Hacking High School, and Blood Queens.

On the other hand, the youngest of the DeMartino family, Anthony Demartino, is a wrestler and a lacrosse player. The 20-year-old studied at Blair Academy.

Gabi got her big break in 2010 when she along with Niki decided to create a YouTube channel. Their channel, Niki and Gabi (originally nikiandgabibeauty) started getting a lot of attention and soon the twins were an instant hit.

Additionally, Gabi is also an accomplished singer and released many singles including Flowers, Yacht, and Ever After. Gabi enjoys a successful career so it’s fair to say her earnings are quite high.

What is Gabi Demartino Net Worth?

Gabi Demartino’s net worth is $1 million as of 2020. She has earned the majority of her wealth from her pretty successful social media career. Furthermore, Gabi also runs her merchandise with her sister Niki. They sell clothing and several other items through their merch. Furthermore, her parents also have made a considerable net worth from their various endeavors.

The social media icon also purchased a house in Los Angeles with her boyfriend, Collin Vogt.

Gabriella has been dating the photographer, Collin Vogt for five years. The couple first started dating in the spring of 2015.

Initially, the pair first met at a party thrown by one of Collin’s co-workers. At the party, Gabi, initially, ignored Collin and when he approached her she turned away. As it turns out, it was all just a show as the Ariana Grande lookalike wanted to show off her butt.

Well, things went smoothly since then and the couple even talked about marriage. There were speculations the couple might tie the knot in the summer of 2020 but that didn’t happen. Only time will tell about that. Nevertheless, the duo is happily engaged to each other. Her boyfriend proposed to her on Thanksgiving 2020.

Gabi previously dated Brandon Grupe. According to reports, the pair went out for five years before calling it quits in 2015. At the time of their break-up, there were many rumors that Gabi cheated on Brandon with her current beau, Collin.

After Gabi turned 18, she decided to revamp herself. And not just mentally, but physically as well. The transformation began after the twins jumped into the YouTube scene.

By the time, she became a big name in the beauty industry, she has had fillers procedures on her lips and underwent a non-surgical nose job, aka, Filler Rhinoplasty. Moreover, she also placed porcelain veneers onto her teeth further glorifying her looks.

In an interview with her sister Niki, when asked why did she opted for the cosmetical procedures, Gabi said, her old face was holding her back from furthering her passion for make-up. The YouTuber explained she always wanted to look like her mother, who is a former beauty queen.