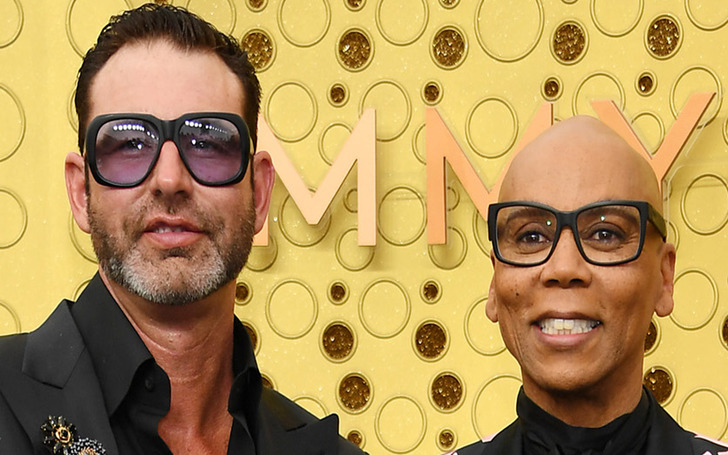 Georges LeBar is the husband of RuPaul (aka RuPaul Andre Charles). LeBar’s partner, RuPaul is an American drag queen, actor, model, singer, songwriter, television personality, and author. Georges’ spouse has produced and hosted the reality competition series RuPaul’s Drag Race. For the series, Rupaul has received eleven Primetime Emmy Awards. He is the most-awarded person of color in the show’s history.

LeBar’s husband has had a massive career in entertainment; RuPaul has done it from music to movies to the Emmy-award-winning reality show. Not only that, but he’s also been extremely loyal to Georges for over two decades and so LeBar has been to him.

What’s intriguing is they didn’t tie the knot for 23 years since their first encounter. So how did they thrive in an open relationship? What made them hold on to each other these long? Also, who was LeBar prior to meeting RuPaul? Know all these in the article below.

Georges LeBar Is From A Rich Family

LeBar was born on January 24, 1973. He comes from an affluent family; as it was his American grandmother from who he inherited a massive amount of ranches in Wyoming. Georges grew up in Perth, Australia.

His family is originally from Wyoming. LeBar is the son of Paul Lester “Barney” LeBar who passed away at age 40.

LeBar studied in Paris, New York, and Miami and then worked in the fashion and design industry, he reveals on his website.

Georges LeBar Is A Rancher And A Painter

In addition to being a rancher, LeBar is also a professional painter. After finishing his fashion studies, RuPaul’s better half found a passion for art.

And now his paintings are all about “exploring life” and he has also made many beautiful paintings of his husband from Drag Race. Some of his creations include Pillow Talk, Six Inches Away, Tapestry, Gossip, Sitting On A Fence, and Microwaves Of Mascara.

He has additionally published his art in two books, Six Inches Away and Pillowtalk (based on C. M. Clark’s beautiful poems). Describing his work, he says on his website that his images are a reference from his history comparing it to the present. “Art is about exploring life for me,” Georges adds.

Georges LeBar And RuPaul Met In 1994 At A Discotheque

Rancher Georges LeBar met Rupaul on the dancefloor at the Limelight Discotheque in New York City, 1994. It was LeBar’s birthday.

“He was on the dance floor dancing like a manic. I had to go over and say, ‘What are you going through? And it’s also because he’s actually 6’7″, so he’s taller than I am — so, of course, I had to notice him,”

RuPaul said while talking with HuffPost, how he instantly fell for the 6-foot-7 LeBar when he spotted him across the room (RuPaul himself is 6’4”).

After that night, the Drag Race icon’s relationship with Georges began their romance and within a week of their first meeting, they were flying from London to Düsseldorf in Elton John’s private jet, RuPaul revealed on his Instagram.

Interestingly, they also got married exactly a year after their first encounter and so their wedding anniversary and Georges’ birthday are on the same day. Remembering the first time RuPaul met his husband, the drag icon described him as a “great guy” who had no interest in celebrity. The Emmy winner also said Georges then would mostly be on his ranch in Wyoming.

RuPaul says, “He is devoted to me, I am devoted to him. And that’s the end of the story.” The Emmy winner and the rancher married on January 24, 2017, and had a secret wedding at their Los Angeles-area home.

Why Did They Take So Long To Get Married? Do Georges And RuPaul Have Any Children?

Speaking to The Guardian in March 2018, RuPaul explained his lifestyle doesn’t allow time for children but, “If [Georges] wanted to do it tomorrow, I would do it.”

The San Diego-born star explained his partner, Georges loves kids but doesn’t have the time to do that. The other reason he mentioned why he doesn’t want to bear children was that he hates dealing with the other parents.

Meanwhile, in the interview, the Californian also explained why he and his husband, LeBar took so long to tie the knot as,

“Conventional, that wasn’t my goal! Our goal was to use the system to work for us. I don’t give a fuck about marriage. What I did care about is that if anything happens to me or him, our assets are protected.”

The Supermodel (You Better Work) singer added that he loves him too much to try to put shackles on him. He also revealed that the 2016 election results helped inspire them to finally officiate their relationship after all of those years.

Their marriage, as a matter of fact, came as a necessity to the couple, for tax breaks and financial reasons.

The remarks soon got quite the criticism because what the Glamazon singer described is more commonly known as fracking. And it is according to environmentalists is a controversial practice that poses too many risks to the planet.

Neither the Drag Queen nor his husband, Georges LeBar have commented on the fracking accusations, but one of their neighbors, Jay Butler, came to their defense to say that they probably don’t have much of a choice.

But explained unless someone owns 100% of the fossil fuel rights under their land, the ranch owners can’t prohibit oil and gas development. He asserted that all of the area ranches are some way or another in partnership with the oil industry.

Georges LeBar Is A Millionaire And Potentially A Billionaire

LeBar owns seven parcels of land in Wyoming totaling some 66,000 acres. The property that he owns is so huge that it even crosses the state of South Dakota. Given that, it would be an understatement to say he’s just a millionaire.

In October 2019, LeBar and his celebrity spouse spent around $13.7 million to buy a 10,300 square-foot home in Beverly Hills. They previously had forked out around $2 million on some property for residential purposes.

Equally important is the fact that environmental groups that track data on fracking sites have determined that there are at least 35 oil and gas wells on just 10,000 acres of LeBar’s ranch. In light of that, LeBar is very likely to enter the three commas club in the near future.

As for the details regarding his current net worth; the rancher could be worth anywhere from tens to hundreds of millions of dollars.

Why LeBar Isn’t In Social Media?

Georges is, in many ways, the absolute opposite of RuPaul. While his celebrity husband loves to be in the center of the action and brings attention wherever he goes, LeBar is more like a typical rancher, quiet and reserved.

He’s never even appeared for a public interview, despite multiple requests; he even denied Vogue. Accordingly, he is also nowhere to be seen on popular sites like Facebook, Insta, or Twitter.