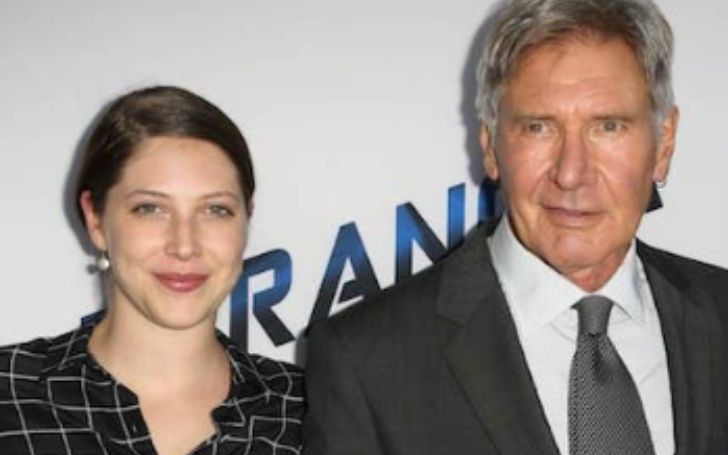 Georgia Ford is is a celebrity kid who shot to fame as the only daughter of the iconic Hollywood actor Harrison Ford. He is a superstar who has starred in several movies and series such as Blade Runner, Witness, Star Wars, and Air Force One to name a few. Also, her mother is a screenwriter notable for The Black Stallion (1979) and E.T. the Extra-Terrestrial (1982).

Following in her dad’s footsteps, she aspired to become an actress, however, her health condition didn’t let her pass the milestones that easily. Nevertheless, Georgia is in good condition at present and has appeared in several movies. Also, her father has been a great support to her and has stood by her side in all her ups and downs. So, what happened to her? We will let you know in the article below.

Read the below subheadings to learn about Harrison’s daughter’s age, parents, movies, net worth, and more. Stay with us till the end!

How Old is Georgia Ford? Her Early Details

Harrison Ford’s daughter Georgia was born on June 30, 1990, making her age 32 years old as of 2022. She was born in Chicago, Illinois, USA, and spent most of her childhood days in her hometown. Talking further about her early details, Georgia holds American citizenship and belongs to a Caucasian ethnic background.

Despite all the stardom she got as a celebrity daughter, she along with her siblings had a normal childhood, unlike other star kids. Even her dad regardless of being the part of glamour industry was called one of the most private actors in the industry which might have influenced his children’s life as well.

Georgia Ford reportedly went to Wildwood school in Los Angeles, California. However, it shouldn’t be a surprise not to know her further academic details as the Ford family likes to keep it low-key. Also, the information of if the star kid attended college or any university is also behind closed doors.

Georgia Ford’s Parents: Who Is Her Mother?

Well, both the parents of the 32 years old were part of the entertainment industry. Georgia’s dad, Harrison Ford is one of the most prominent actors in Hollywood who has appeared in multiple movies. Similarly, her mom Melissa Mathison was also a popular American film and television screenwriter.

Georgia’s mother was a notable screenwriter famous for her work in The Black Stallion (1979) and E.T. the Extra-Terrestrial (1982). She even won Saturn Award for Best Writing and was nominated for Academy Award for Best Original Screenplay. Besides, she was also an activist for the Tibetan independence movement.

Unfortunately, she passed away on November 4, 2015, in Los Angeles at the age of 65. The reason for her death was noted as neuroendocrine cancer.

Her Dad is a Hollywood Superstar

Ford’s father Harrison on the other hand, is an American actor who has starred in several movies and series such as Blade Runner, Witness, Star Wars, and Air Force One to name a few. He was also listed as the seventh highest-grossing actor in North America as his films grossed more than $5.4 billion in North America and $9.3 billion worldwide.

Furthermore, Harrison Ford is too a recipient of accolades like the AFI Life Achievement Award and the Cecil B. DeMille Award. Not only this but he was also nominated four times for Golden Globe Awards and once for an Academy  Award.

How Many Siblings Does Georgia Ford Have?

Georgia Ford is the youngest child of Harrison Ford with his second wife Melissa Mathison. Having said that, she has a biological elder brother, two half-brothers, and an adoptive brother. Even though she has many siblings, she is the only daughter in the Ford family.

Her only biological brother is Malcolm Ford who was born on October 3, 1987. He is an American vocalist and a musician. In addition, he has his own band “The Doughlas Rollers” with four members in it, including him.

Likewise, Georgia’s two half-brothers are from her dad’s marriage with his first wife Mary Marquardt. They are the chef and restaurateur Benjamin born in 1966 and Willard born in 1969.

Similarly, her adoptive brother is from her father’s third wife, Calista Flockhart. Harrison married her after his divorce from Mathison and adopted her adoptive son as well. His name is Liam Flockhart and was born in 2001.

The news of the Hollywood star’s daughter being diagnosed with epilepsy spread like fire when the father himself talked about it showing concern toward her. Her admirers were worried about her condition when the kid’s dad break his silence to put his words forward about his kid.

Georgia Ford and her dad have attended the event at NYU Langone Medical Center’s Find a Cure for Epilepsy and Seizures (FACES) several times. In one of those events, Harrison stated to NY Daily News that she is doing well these days and thanked Dr. Orrin Devinsky and FACES for her improving condition.

The American Milkshake actress was facing this problem since her childhood, however, no doctor could find what the issue really was. Sometimes she was given medicine for acute migraines whereas sometimes other medications. Eventually, the family met Dr. Devinsky who helped to cure his daughter.

“Dr. Orrin Devinsky, who is a dear friend, made the diagnosis: epilepsy. He prescribed the right medication and therapy; she has not had a seizure in eight years.”

According to the Blade Runner actor, epilepsy is in the history of his family and has affected them in the past as well. Nonetheless, we are glad to know his baby girl Georgia’s health is in a good state.

What Happened to Georgia Ford?

As mentioned above, Ford was fighting epilepsy. The good news is she is doing okay now and hasn’t suffered any attacks for 8 years now.

What Movies Has Ford Been In? Her Career Highlights

Georgia has followed in her father’s footsteps and started her career as an actress. She entered the world of acting when she first debuted through the movie American Milkshake in 2013. Subsequently, she appeared in the movie True Story in 2015.

Even though the actress is into acting, she hasn’t performed in many movies yet. Apart from the above-mentioned movies, Gloria has done a couple of more movies like The Visitor in 2016 and I’m Being Me in 2020. However, she hasn’t done any other films since then. It might be because of her health issues or any other reasons but we hope to see her soon in upcoming projects.

Is Georgia Married Or Dating A Boyfriend?

Thus, at present, there is no info surrounding her relationship status. Hopefully, she talks about her love life in the future.

What Is the Net Worth of Georgia Ford?

The flourishing career of the celebrity kid has helped her manage her fortune for herself. As of 2022, she has a net worth of $1 million. However, she has been living a lavish life as her dad is a millionaire.

On the other hand, her father Harrison, an iconic Hollywood actor has total assets of $300 million. He has provided equal wealth to all his children and has supported them to establish their careers.