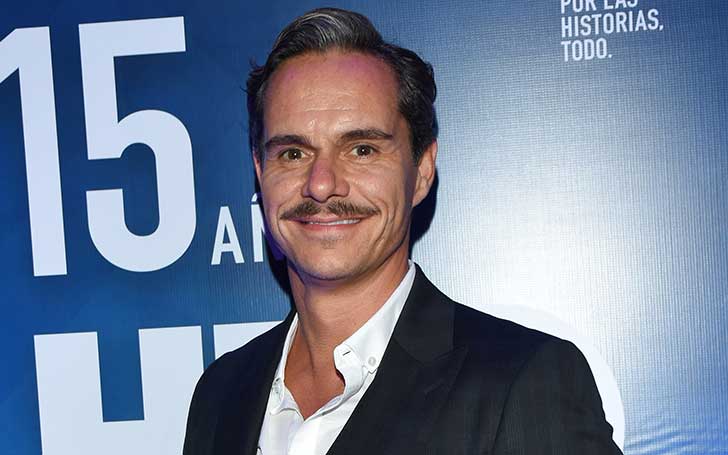 Mexican-American actor, producer, and screenwriter, Tony Dalton is famous for his role in Better Call Saul. He started portraying the character of Lalo Salamanca in the fourth season of the show.

The 45-year-old actor predominantly worked in the Spanish-language (Mexican) films and television series in his two-decades-long career. One of his most known roles in Mexico is in 2015’s Dueños del paraíso, in which he played the role of Renato Maldonado.

Let’s dig everything out about Tony Dalton’s personal and professional life.

He completed his early education in his hometown in Texas before moving to New York to study acting. There he enrolled at Lee Strasberg Institute.

What is Tony Dalton Ethnicity?

Dalton belongs to a mixed ethnical background as his father is a Mexican and his mother is an American.

While he was studying acting in New York, Dalton started acting in small Off-Broadway plays. Some of them include The Ballad of the Sad Cafe, One Flew Over the Cuckoo’s Nest, and A Streetcar Named Desire.

Dalton also worked in the theater after he started his professional acting career as well. In 2009, he played in El año próximo a la misma hora, and Juegos de poder.

Dalton kicked off his professional acting career in the year 1997, with an appearance as a college student in the movie Minotaur.

His first recognized film role came in the 2004 Mexican film Matando cabos, in which he played the role of Javier “Jaque.” Dalton was also the screenwriter of the movie.

Talking about his television works, he debuted from a small role as Tom in the Mexican telenovela Ramona. After that, he played in a minor role in a number of television series including Mi destino eres tu, No te equivoques, and Clase 406.

Dalton’s first prominent role on television came in 2008 when he was cast in a recurring role of Augusto Mateos in the Mexican HBO series Capadocia.

In 2015, Dalton starred as one of the main casts, Renato Maldonado in Spanish language telenovela, Dueños del paraíso. The following year, he played the role of Lito’s agent in 3 episodes of Sense8.

In 2018, Tony Dalton landed one of the most promising roles of his career, Lalo Salamanca in the American television crime drama series, Better Call Saul.

He started as the recurring cast in the fourth season of the series and went on to become the main cast in the fifth season in 2019. Other popular faces of the series include the likes of Bob Odenkirk, Rhea Seahorn, Michael Mando, Kerry Condon, and Daniel Spenser Levine among others.

Tony Dalton won the MTV Movie Award, Mexico for his role in the Matando cabos in 2005. Later in 2015, he was nominated for the Best Supporting Actor at the Mexican Cinema Journalist Award for his role in La dictadura perfecta.

Actor Tony Dalton has given more than two decades of his life to the entertainment industry. During this period, he has worked in around a dozen TV series and around half a dozen films. Besides the fame and recognition he earned from his acting career, he has amassed a good fortune as well.

The 45-year-old Better Call Saul star, Tony Dalton is not married until 2020. Moreover, the actor is not dating anyone at present. However, Dalton was in a couple of relationships before. He is reportedly living single after his breakup from his ex-girlfriend Ana de la Reguera.

Tony Dalton and Ana de la Reguera – Why They Ended Their Relationship?

Tony Dalton and Ana de la Reguera started dating in 2018. It is not clear how and when their romance blossomed. But, their romance came to media attention during mid-2018, when they were spotted on a romantic trip to the beaches of Tulum, Quintana Roo.

In September 2018, Ana confirmed her relation with Dalton in a talk with the media. Back then, she told that she was very happy with her then-boyfriend. She also said that she was greatly in love with him.

Within a year since the actress admitted to date Dalton, the pair broke up. The ex-lovebirds reportedly split in July 2019, however, the news only surfaced a few months later. Ana confirmed her separation with Tony on December 1. Talking to People En Espanol, the actress said their tough work schedule was the cause of their breakup.

Where Ana de Reguera said she and Dalton parted their ways due to their work issues, one of her friends told MSN, it was due to Dalton’s infidelity. She told the outlet that Tony Dalton is a womanizer and he was in contact with a number of girls when he was dating Ana.

She also told that Ana wanted to marry Dalton and start a family with him. However, Tony was not ready to get married although he is already in his 40s.

Ana’s friend also revealed that Ana saw several messages on Tony’s phone that revealed his encounters with the women. Even though Tony wanted to justify himself saying it was just a game, Ana had decided to end her relationship with him.

Meanwhile, Ana denied infidelity was the cause of their breakup in the interview with People En Espanol.

Well, actor Tony Dalton has not shared his love life and his girlfriends in the media. However, some online sources have reported the actor had dated a couple of actresses before he started dating Ana. He dated actress Alejandra Barros during the late 2000s and broke up with her in 2010.

After his breakup with Barros, he briefly dated another actress, María Elisa Camargo. They were reported to be an item after they were spotted together in Cancun, Quintana Roo. However, they never went public as a couple.

Iman Marson-Everything You Need to Know About Wednesday Star