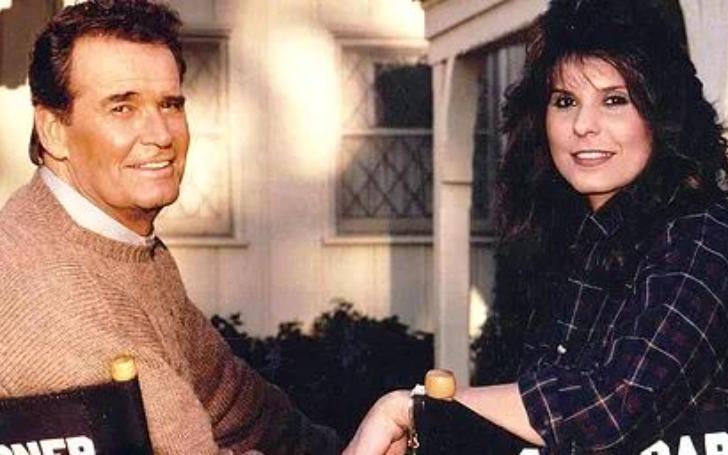 Gigi Garner is an American star kid who is the daughter of legendary actor, James Garner. She alongside her sister is the only two kids of the late actor. He had the two of them with his wife, Lois Clarke.

Ever since the passing of her father, Gigi has inherited her father’s ambition. Although the celebrity kid isn’t an actor, Gigi is still involved in showbiz through her work behind the scene. She also worked for her father’s production house and is continuing his legacy.

Besides, what else is there to know about her? Does Gigi Garner have a husband and children? Where is James’ daughter nowadays? Let’s find out all the answers to the question!

Who Are Gigi Garner’s Parents? Her Date of Birth and Early Life

Gigi was born Greta S Garner on January 4th, 1958, in Los Angeles, California to James Garner and Loise Clarke Garner. And her age is 64 in 2022. Her father passed away at the age of 86 due to natural causes.

Gigi’s paternal grandparents, Weldon Bumgarner and Mildred Scott were German-Americans. She belongs to the Caucasian ethnicity and has American nationality.

Gigi spent the major portion of her childhood in the posh suburb of Los Angeles. She certainly lived a lavish life and considering her dad was making big bucks at the time when Garner was born, we don’t find it surprising.

She Has One Adopted Sibling

Apart from Gigi, James and Lois is also a parent of one another child named Kimberly Garner. Gigi’s mother Lois, before marrying her father, had already become a mother from her previous relationship.

Upon marrying Lois, James adopted Lois’s daughter and they became a family of four. In an interview with Closer Weekly, Gigi told that her father found happiness in his family. He was incredibly close with his daughters.

While speaking about her father’s love for children, Gigi said,

“My dad never met a child he could resist… My friends adored him, too, and not because he was some big Hollywood star, but because I had the most fun dad. If I wanted to jump off the balcony into the pool, he would do it first just to make sure it was safe.”

Gigi Garner’s parents were married for over five decades

Her father James Garner and mother Loise Clarke exchanged vows on August 17th, 1956. In the beginning, they met at a mutual friend’s poolside barbecue. However, love blossomed between them only after they met for the second time at the rally for the 1956 Democratic presidential nomination of Adlai Stevenson.

The lovebirds’ relationship was tested when they separated in the 1970s. Back then James had mentioned that it was his busy schedule that led to the destruction of his marital life. Fortunately enough, the pair got back after an 18-month separation.

Details on Her education and college

Gigi Garner graduated from Westlake School for Girls (now Harvard-Westlake). After finishing up high school, Garner decided to study film and enrolled in the Bachelor of Arts program at the University of Southern California Film School.

As part of her study at USC, Gigi also went on to study German films, The Third Reich for one semester in Wiesbaden and Munich, Germany. In addition, Garner also had a stint at Creative Artist’s Agency. She graduated from college in 1981.

Gigi Garner’s Career: She started out as an actress

Gigi was only an infant when the star kid made her big debut in the entertainment world from the TV program, This Is Your Life: James Garner.

Several years after her big debut, James Garner’s daughter played the role of a singer in the 1982 series, Musikladen. In the early 1980s, Garner was a charted recording artist in Europe. During that time, the celebrity kid also worked as the hostess for a show on Thames Television. In addition to that, Gigi also featured in several projects around the US, the UK, and Germany.

Garner also tried her hands in several other jobs

Well, it might come as a surprise for many of you that Gigi is a licensed private investigator based in Tennessee. She also worked as a print model, a commercial spokesperson, wrote three ‘number one’ songs, and authored two famous books, ‘The Cop Cookbook,’ and ‘Girl Talk.’

Apart from all that, Gigi was once involved in designing handcrafted jewelry for major TV shows and celebrities.

As of now, Gigi operates her father’s production company, CHEROKEE PRODUCTIONS. It was her father James who first established the production house back in 1965.

Since joining the organization, Gigi’s sole objective has been to take it up a notch and explore all sorts of wonderful opportunities. Given her educational background on top of her experience in showbiz, it’s no surprise Garner is taking the organization to new heights every day.

Well, not only is Gigi a multi-talented individual, but she is also pretty good at it. Her talent agency Gigi Garner Management and Consulting opened its doors in 2010 and within a span of one decade, it has produced numerous talented individuals.

Many of her clients have starred in recurring or guest star in shows like The Big Bang Theory, The Middle, Sons of Anarchy, Justified, Revolution, Mad Men, and The Mentalist.

Back in 2013, Gigi’s talent agency was named the #1 Boutique Talent Manager by IMDb Pro.

Who is Gigi Garner’s Husband? She has been married two times

As we said above that Garner has been married twice. She was first married to film actor, John David Hart in 1990. Her then-spouse is famous for his work in numerous TV series and movies including Social Path, The Afflicted. However, the former flames didn’t go long as they went their separate ways three years after their nuptial.

After divorcing her first spouse, the actress exchanged vows with a her second husband named Steven Hewitt. There’s not much known about her second marriage.

However, there’s no information if Gigi has a child or not.

Where is Gigi Garner Today? Her Wealth

At present, James Garner’s daughter Gigi, the CEO at Cherokee Productions currently resides in Los Angeles, California, United States. And talking about her net worth, it is said that the star kid has a $1.5 million in 2022.

In the meantime, her late father James had a fortune of $20 million at the time of his death.