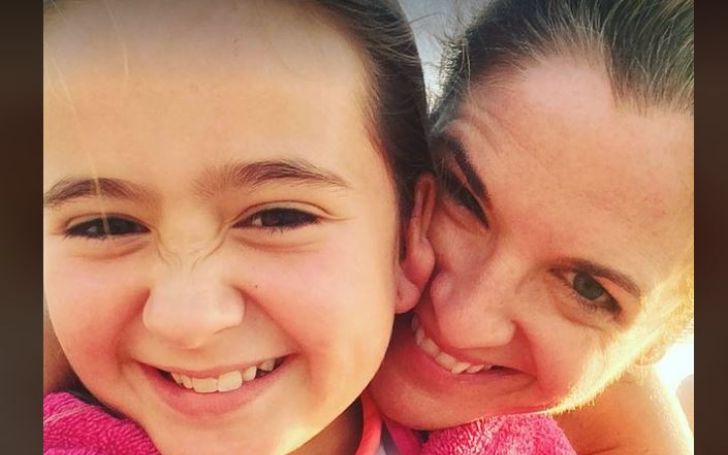 Tish Melton is a young singer who is better known as the daughter of Glennon Doyle, author and activist known for her #1 New York Times bestsellers Untamed, Love Warrior, and Carry On, Warrior.

Glennon had Tish with her ex-husband, Craig Melton, a former soccer player whom she was married to for 14 years.

Although Doyle is the frontwoman whenever the media turns their spotlight on her family; a few other people have also managed to steal the thunder from her on a few or two occasions. And Tish is one such name; take a look back at some of those times in the article below.

Well, Tish Melton was born in Feb 2006. Doyle and her ex-husband named her after the former’s mother.

The now 16-year-old is part Hispanic from her father, Craig Melton, an employee at Prevail sales enterprise who is also a former soccer player. Tish’s father met her mother, Glennon, a native of Burke, Virginia on July 4, 2001, at an all-day bar crawl in Washington, DC.

They slept together the first night they met and began “drinking and drugging constantly.” Glennon afterward quickly found herself pregnant but she would terminate the pregnancy.

Several months later Tish’s mother discovered she was pregnant again. This time, she decided to have it after which she married Craig.

Following their courtship, they became parents to three children including Tish. Melton and the Untamed writer, however, would end their marriage in mid-2016 following Doyle’s coming out.

After that, Glennon started a relationship with Abby Wambach, celebrity soccer champ, Olympian, activist, and author in Feb 2016. They married in May 2017.

As mentioned, Tish has an older brother, Chase, and a younger sister, Amma.

Following the marriage, Doyle and her former spouse had a baby boy, their first child, who they named Chase. The three then settled in Fairfax, Virginia. After Chase, Glennon, and Melton gave birth to Tish.

And two years after her birth, Tish’s parents Craig and Doyle had another daughter, Amma, who they named after the latter’s sister, Amanda.

Taylor Swift Inspired Her To Play And Write Music

Glennon and Craig’s daughter, Tish is strikingly a talented teenage singer; and she as well as her whole family credits her proficiency in music to the multiple-time Grammy-winning artist, Taylor Swift.

The 45-year-old author detailed the whole experience in an Instagram post on Dec. 16, 2020. In that, Glennon stressed to her followers, she “always knew Tish was an artist”—even if her teen girl didn’t always know it herself.

In her post, she also penned the process of how Tish used to quietly listen to Taylor’s music every night before going to sleep. Doyle said soon after, she noticed Tish starting to sing as well.

After a while, Craig and Glennon’s started playing with Abby’s guitar. The Burke-born author also reported Tish trying to find Taylor in that guitar with chords.

The teenager apparently continued to practice every day each night sitting on the edge of her bed, sheets of music spread out in front of her, hair pulled off her face, guitar in her lap. All while playing Taylor to herself. Soon she started taking guitar lessons with always a Taylor song in her hand.

Not long after, she would write her own song which after hearing her writer-mother says she was taken aback by how “beautiful” it was. At the end of her Dec 2020 post, Glennon expressed her appreciation for the Trouble singer.

“Taylor Swift: Your art led my daughter to hers. And now we get to see her, like really see her. All the time. And for that: I will be grateful to you forevermore, @taylorswift,”

Things started getting intriguing when Doyle’s current partner stepped on Instagram trying to reach the Style singer mentioning Tish’s love for her. And the thankyou-s soon turned into headlines when Taylor personally reciprocated to Abby and Glennon about Tish’s musical undertakings.

Through her own Ig handle, Abby had first written,

“I have to send a special happy bday to the creator of our families soundtracks of 2020 @taylorswift13. Our daughter Tish asked me today to tweet you a happy bday. You have awakened an artist inside her and there is no greater gift you can give our family. Thank you!”

To this, the eight Billboard Hot 100 number-one songs singer replied,

“Just saw this and GRINNED!! Tell Tish hi and thanks for remembering my birthday!! You, my friend, are a champion in every way. And Glennon’s writing has been a huge help to me this year, what a luminary she is.”

Worth mentioning is the Pennsylvania-born artist had asked Abby and her soccer teammates to join her onstage for the 1989 Tour after the U.S. Women’s National Team won the World Cup in 2015?

Glennon’s video also included Tish reading the response for the first time which subsequently shows how speechless her daughter was when she saw it. The footage additionally includes Tish singing Taylor’s songs.

At 10, Tish Melton Created A Petition Regarding Body Positivity

Tish first grabbed the media attention and had even become a name in the headlines when she was just 10-year-old.

Back in May 2016, the second child of Craig and Glennon wrote a petition requesting magazine editors to celebrate women of all different shapes, sizes, and colors. This she did after having an honest conversation with her mother about the pressures society puts on females to meet its expectation of beauty.

The petition by Tish was first on her Glennon Doyle’s Momastery, the online community which she had founded prior to her writing fame. Using the title Help Save Humanity, Tish had penned wrote,

‘Dear world, this is a petition to show that I, Tish Melton, strongly feel that magazines should not show beauty is the most important on the outside.’

Glennon later shared a blog post about how her daughter came up with the idea of writing the petition. She revealed her daughter thought of penning it after she had a conversation with her mother asking why she was different than the other girls who are ‘all skinny.’

While sharing the talk between her and her daughter, Glennon also mentioned her own struggle with bulimia and addiction that she, too had started to notice when she was 10. Doyle added it was only after talking to her ex-husband, Craig that she was finally able to talk about the body image issue with her daughter for hours.

They also dealt with the messages society sends to girls about ‘staying small and quiet as a way to keep them from being leaders.

Tish and her mother would make their way out of a bookstore the very next day of their body image talk. There the two stopped in front of a magazine rack and saw seven publications’ covers.

Tish noticed all the covers featured ‘blonde’ and ’emaciated’ women. Shortly after, Doyle and her daughter had another candid conversation during which Glennon went on to ask Tish if she thought women’s bodies are for selling things, and her little girl promptly said ‘no’.

The Carry On Warrior author also told her daughter how the magazines were all a lie and that there was nothing wrong with her. An hour after they returned home, Tish showed her mom with her handwritten petition, which their entire family signed.

Glennon promptly right away shared the petition online as well as on Facebook, where thousands of people shared the little girl’s message.