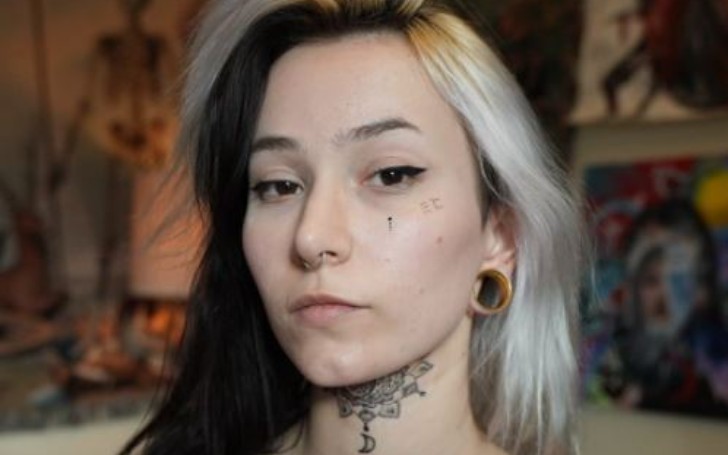 Goth Egg is an American social media star. She initially rose to fame from her TikTok channel and afterward, she transitioned to other platforms. Goth, whose real name is Lee, is quite open with her fans but rarely does she talks about the other aspect of her personal life.

She has been active on the internet since 2020 and in a short amount of time gained a lot of fame. In addition to sharing content on Instagram and TikTok, she also tries to remain active on YouTube, though it hasn’t been the case lately.

Today let’s take a closer look at the life of this social media personality and get to know her personally.

She was born on March 24th, 2000 in the United States of America. And her age is 21 as of 2022. Her real name is Lee and she belongs to the Aries sunshine. Moreover, Goth’s nationality is American and belongs to the Caucasian ethnicity.

There are a lot of questions regarding her family and parents. However, to this day, she is yet to say anything about them. One thing we do know is that she has moved out of her parents’ house. In one of her few YouTube videos, Goth revealed she lives with roommates.

As of now, she lives in her apartment alongside her pet cat. She stands at a height of 4ft 10 inches.

It was during the middle of the Covid-19 pandemic in 2020 that Goth decided to enter the world of social media, professionally. Before that, she was active on Instagram but only to scroll through memes. But then she decided to give TikTok a shot.

Her account which goes by the username @goth.egg literally exploded. She generally shares a lot of comedy skits related to her height and other stuff. As of now, she has more than 3.1 million followers and more than 34 million likes which is substantial for someone who is only active for a year or so.

Goth is also active on other social media platform

Nevertheless, Goth also accounts on adult websites including OnlyFans. She is quite active on the platform where you have to pay in order to access the content.

Goth has a couple of exceptional hobbies

She is not your regular social media personality who doesn’t have any other hobby. She is an avid piano player and taught herself to play. Whenever Egg is a bit stressed out or in a good mood, she plays around with her piano.

Besides, Goth is also an exceptional artist. Her arts are usually centered around dark arts. Being a goth lover, she loves to draw goth arts on a regular basis. Many of the regular household items like pillows and rugs are all goth theme-based.

Is Goth Egg dating? Who is Her Boyfriend?

Goth Egg is openly bisexual, which means she loves both men and women. As for her current dating status, well, she doesn’t seem to have a boyfriend or a girlfriend at present.

Moreover, Goth has stated on one of her social media sites that her relationship status is single. Now talking about her past affairs, she has been open about two of her affairs.

She was involved in two relationships before, both of which lasted around a year. Nonetheless, at the moment she doesn’t seem to be interested in committing to a relationship.

Be that as it may, Goth is enjoying her single life with her pet cat whom she has named Egg Roll. Looks like she has some kind of attraction with the word Egg.

How much Goth Egg’ net worth?

As of 2022, her net worth is somewhere around $200,000. She generally earns a lot of money from her adult social media profiles. One of her sites has more than 100 million views. Meanwhile, on the other site, you literally have to pay to see her content.

Apart from that, she also earns a decent amount of money from sponsored posts on both TikTok and Instagram. Further, she lives in her own apartment which tells us a bit more about her earnings.