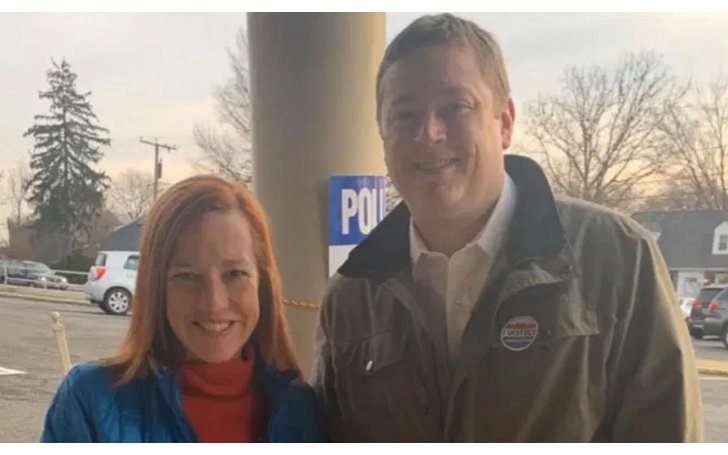 Gregory Mecher became a known face after his wife, Jen Psaki became the White House, press secretary. Just like his wife, Greg too works in the government. Besides, from their marriage, the lovebirds are a parent of two children.

Meanwhile, Jen has been really secretive regarding her personal life so much so she has rarely ever talked about her hubby and kids. Thus, her secretiveness has led to a lot of curiosity pertaining to her family, especially her husband.

In today’s article, we will lay out a lot of interesting facts about Gregory Mecher including his wiki, profession, salary, and bio.

Gregory Mecher Wiki-Bio: Where is he from?

He was born on August 31, 1976, in Cincinnati, Ohio. Greg is one of the three kids between Michael and Mary Ann Mecher. Belonging to the Caucasian ethnicity, growing up, Greg spent his early childhood and adolescence in Delhi, Cincinnati.

Greg’s father Mike, well, is an engineer who worked at the HK Systems as the senior project manager from 1975 to 2009. On the other hand, his mom used to be a fourth-grade teacher at Our Lady of Victory, a Roman Catholic Grammar school.

After finishing up his early education, he graduated high school from Elder High School. After that, he enrolled at the University of Northern Kentucky University. From the college, he graduated with a B.A. in Communications/television production in 1999. Moreover, Greg was an exceptional college student as he was awarded the Outstanding Young Alumnus in 2010.

As we mentioned above, Jen Psaki’s husband has two siblings, both of them which are brothers, Daniel and David Mecher. Just like Greg, both of his brothers are also doing good in their respective careers. Daniel is currently working as the Vice President at the Fifth Third Bank. He has been working in the company since 2017. Before that, Dan worked at Garretson Resolutions Group, Hobsons, Toyota Motor Engineering & Manufacturing North America Inc. He is married to Camilla Mecher.

Meanwhile, the youngest of the brood David works as the Executive Assistant at EarthDay.org. In addition, he has previously worked as a Political Assistant, Government Affairs Assistant, and Legislative Correspondent in the House of Representatives. He is currently engaged to be married to Hanna Vedder.

What is Gregory Mecher doing? What is his profession?

We’re sure many of you are quite curious to know which profession is Greg involved in. Well, he is a Congressional staffer who has worked for several different congressmen. From 2009 to 2011 he worked as the Chief of Staff for Rep. Steve Driehaus. Furthermore, he also worked as White House Liasion and Deputy Chief of Staff for the U.S. General Services Administration from 2011 to 2013. Greg was also the Chief of Staff for Congressman Joe Kennedy III from the Commonwealth of Massachusetts

Greg’s time at the college really helped him a lot to become a congressman staffer. While he was still in school, Greg was the student representative to the Board of Regent. Around the same time, he met a guy named Alice Sparks who helped him in getting an internship at the office of the former Congressman Ken Lucas. It was during this time that Greg decided to work on Capitol Hill.

Greg and Jennifer are married since 2010. The pair exchanged vows in an intimate ceremony on May 8th, 2010. The wedding took place in Woodland Farm, Ridge, Maryland, and was attended by many of their friends and family. For the marriage, Greg wore a black suit while his bride looked gorgeous in a beautiful gown.

Revenant Dr. David D. Young a minister from the United Church of Christ, officiated the wedding. Unlike other females who adopt their husband’s surname, Psaki decided to keep hers.

Since their marriage, their relationship has been sailing smoothly. Though Jen rarely ever talks about her personal life, the duo sometimes shows up whenever there’s a big official event.

Well, one thing is for certain, the lovebirds are extremely happy with their relationship.

How did Gregory first meet his wife Jen?

It was back in 2006 when Greg and Jan met for the first time, however, in an unusual way. So back then Psaki was working at the Democratic Congressional Campaign Committee. One day, the DCCC chairman of the time, Rahm Emmanuel decided to come to Philadelphia to speak at an event.

Jen was then setting up a web video for Rahm when his driver called, asking for direction. As someone who isn’t really good with direction, Jen unknowingly gave the driver the wrong direction which led them astray. Surprisingly, the chairman’s driver was none other than Gregory himself.

Eventually, Greg found his way and they got to the event, though he was kind of furious at Jen for giving him the wrong direction. Nevertheless, his anger somehow crumbled when he saw Jen for the first time. Seeing how cute she was, he immediately forgot all that happened between them and introduced himself to her. Later on, they got closer as they used to work at the same office.

How many children does Gregory share with Jen Psaki?

From their decade’s worth of marriage, the lovebirds became a parent of two kids, one daughter, and a son. They welcomed their daughter, Genevieve ‘Vivi’ Mecher, on July 21st, 2015. Then a couple of years later their second-born Gregory Matthew on 23rd April 2019.

Jen, who is the most active among the two on social media, has rarely shared pictures of her kids. It was through Greg’s father’s FB account that we found out about their children. The family of four currently resides in Pennsylvania.

As of now, his net worth is around $1 million. Throughout his career, he has earned over $1.5 million as compensation. On the other hand, his wife Jen has a total fortune of $2.5 million.