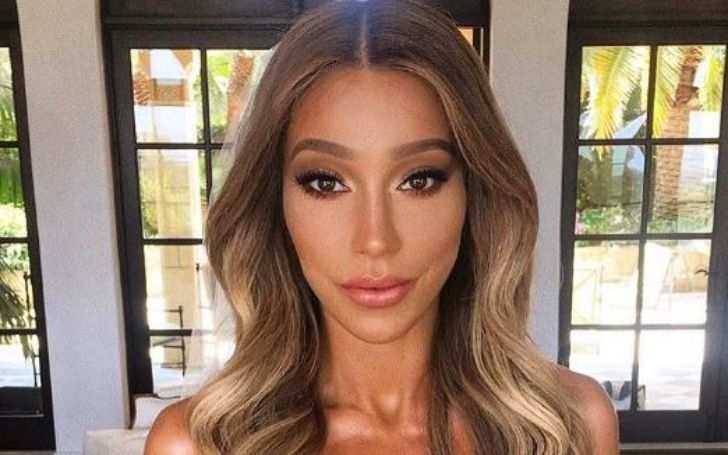 Haley Giraldo, 37, is an American Instagram star, model, social media influencer, and mother of two. She is the daughter of rock singer and songwriter Patricia ‘Pat’ Benatar and her husband Neil Giraldo.

Giraldo rose to prominence with her fashion and lifestyle-related posts on Instagram where the promising Insta star has over 128k followers in 2022. Likewise, Giraldo is an occasional reality TV personality who has worked in shows like Filthy Rich: Cattle Drive and Hollywood Squares.

In addition to all that, here also find out more about her lifestyle, husband, wedding, and more. Details are down below.

The model Haley Giraldo was born on 16th February 1985 in Los Angeles, California under the birth sign Aquarius. She is 37 years old in 2022 and stands at a height of 5 ft 4 inches.

Giraldo is the oldest child of singer-songwriter Pat Benatar and record producer Neil Giraldo. She is an American as per her nationality and has mixed ethnic ancestry. From her mother’s side, she is German, English, and Irish and from her father’s side, she is Sicilian.

Besides, the rising star has not revealed any information about her education and college.

Haley grew up alongside her sister Hana Giraldo who is also a model. The Giraldo girls were raised in Los Angeles, California by their star parents. In addition, her sista Hana is also a singer who is best known for hits like ‘Insanity’ and ‘Tote – Gimme that Bass,’ and more.

Similarly, she also has worked on a couple of TV projects as a sister. Her movies and TV credit include Big Baby and A Christmas Cruise.

The 37-year-old Giraldo has been a media magnet since way before she was born. Thanks to her celebrity parents, her profile as a star kid is also already a bonus to her career.

Nonetheless, Haley Giraldo gained additional popularity on social as an influencer and a fashion model. She currently has over 128k followers on IG where she mostly posts about her life updates. Similarly, her official Twitter handle is @haleygiraldo and has over 7k followers as of Aug 2022.

So far, Haley has worked with brands such as Lack of Color Hats, Gladys Tamez Millinery, L*SPACE, Reformation, American Apparel, and several others. Not to forget, she also worked in the 2005 TV show Filthy Rich: Cattle Drive and Hollywood Squares.

As Haley has already starred in a similar TV show, many were expecting her to appear in the 2022 show Relatively Famous: Ranch Rules. Sadly, Haley did not make it to the cast list. But, her younger sister Hana did.

Hana appears in the show alongside other celebrity kids and lives and works at a ranch in Steamboat Springs, Colorado. The main motive of the show is to prove their worth to their parents and the world and that they are more than just their last name.

As mentioned above, Haley is the older daughter of worldwide famous singer Pat Benatar and her equally famous husband Neil Giraldo.

Talking about her mother’s career, Pat is a four-time Grammy Award-winning singer and songwriter best known for In the Heat of the Night, Heartbreaker, Crimes of Passion, and more.

She began pursuing her career as a singer in 1972 after quitting her job as a bank teller. Her debut album In the Heat of the Night hit the market on August 27 1979 and quickly became her breakthrough album.

Moving on to her father Neil’s career achievement, he is a record producer, musician, arranger, and songwriter with nine Grammy nominations winning five out of them.

Apart from music, he is the founder and the chairman of the beverage manufacturing company called Steel Bending Spirits LLC. As of 2019, the company expanded its product line with two new variations, Twelve Bar Reserve and Amplify Rye.

Who Is Haley Giraldo’s Husband?

Born and raised in Texas, Matt is currently based in Los Angeles where he resides with his family. As per his IG bio, he is also a certified personal trainer and has over 64.8k followers on his Instagram @matt5williams.

When Did The Couple Marry? Their Wedding

Haley and her then-boyfriend Matt reportedly started dating in 2014 as the Instagram star posted Matt on her IG for the first time on 2nd November of the year. Two years later, Giraldo announced their engagement via IG on 13th June 2016.

She announced the big news simply captioning a picture of them with “Last night we celebrated our engagement” along with a red heart and the ring emoji.

And on 17th July 2017, they got married in an intimate wedding ceremony held in Santa Barbara at Villa Sevillano. Their nuptials were attended by both their families and friends.

Since then, they are leading a happy matrimonial relationship.

Giraldo Is Welcoming Her Third Child With Her Hubby

On 1oth May 2022, Haley posted a video of her showing and caressing her belly bump. Similarly, on the second slide, she posted another video with ‘you’re having a baby boy’ revealing the gender of the baby.

How Rich Is Haley Giraldo?

As a model, Haley has surely earned a decent amount of fortune. According to Celebrity Net Worth, she is reportedly worth around $500 thousand as of 2022.

She earns income as a model and social media influencer. On the other hand, her mother Pat Benatar has an estimated fortune of $40 million. She has racked such a considerable fortune from her prodigious singing career.