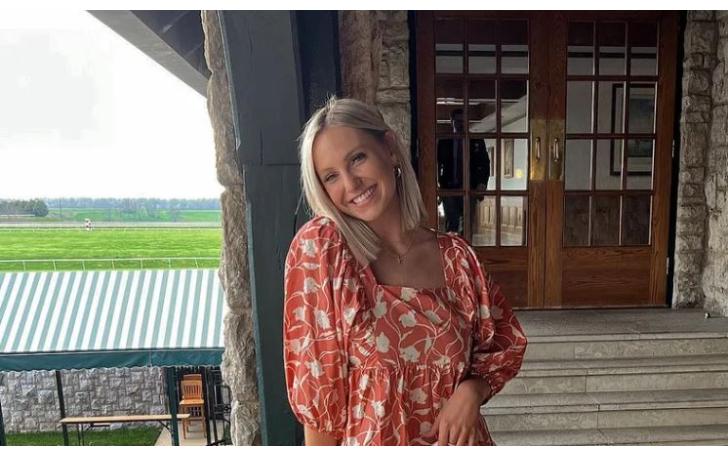 Talking about their relationship, the couple was in a relationship for a couple of years before calling it quits. So who is Harper Hempel dating currently and what was the reason behind the couple’s separation?

Today we shall find the answer to the questions in addition to some interesting facts about her life.

Harper Hempel Wiki-Bio: Where is she from?

She was born on August 31, 1996, in Kentucky. She is the daughter of Richard Hempel and Colleen Hempel.

Harper belongs to the German, Dutch, and Swedish ancestry and has American nationality.

She spent the major portion of her childhood in Union, a home rule-class city in Kentucky. She was brought up alongside her brother Conner Hempel.

Harper is famous for dating a pro-athlete and one of her family members is also a player. Her brother Conner used to play American football for his high school Larry A Ryle High School.

With his team, he even won the Ivy League Football Cup. In addition, he has been awarded a variety of awards throughout his career. From 2011 to 2014, he was on the Harvard University team.

Nevertheless, he didn’t turn pro and is currently working as the Vice President of the 3rd Party Operation department at Wheels Up.

Harper’s dad Richard is a co-founder of eCoach Sports. According to his LinkedIn profile, the company is,

“The global coaching platform for youth sports that makes the world’s best coaches available to everyone. In partnership with the NBA Coaches Association, eCoach has created the “Masterclass of Basketball,” the largest short-form video instructional library and curriculum in the world taught exclusively by over 40 NBA coaches.”

Well, as if it wasn’t obvious enough, Harper was also an athlete in her high school. After finishing up her middle school, she enrolled at the Ryle High School, where she played Volleyball for the team, Wildcats. During her senior season, she even became the MVP.

She then enrolled at the University of Kentucky in 2014. Then in their Sophomore year, she joined the college’s volleyball team as well. Throughout her time in college, she played Volleyball and performed incredibly. A tweet by Kentucky Volleyabll even showed a video of Harper acing against LSU’s team,

But just like her brother, she also never turned pro. Besides, Harper graduated with a Bachelor’s degree in Marketing in 2018.

Harper Hempel relationship with boyfriend Jamal Murray: How did it begin?

As we mentioned before, Harper and Jamal first met when they were in college. Both of them studied at the same University of Kentucky. Jamal had joined the college back in 2015, though Hempel attended college in 2014.

They both played sports, Hempel played Volleyball while Jamal played Basketball for the college and this is how they became close at first.

Around the time they were in college, the pair started dating. Their relationship was tested when Jamal was drafted by Denver Nuggets and had to move to Denver. Meanwhile, Harper stayed back in Ky in order to finish up her studies. Thankfully, their love stood the test of time and they didn’t break up.

Why did Harper and Jamal break up?

When your relationship is constantly in the eyes of the media and fans alike, there are bound to be problems. Just like in any other celebrity relationship, Jamal and Harper’s relationship suffered from issues pertaining to their privacy which eventually led to their separation.

Everything was going well between them when something completely ruined their love story. Around March of 2020, a video of a girl performing oral sex on a guy was shared on Jamal’s Instagram account, along with some bunch of other really weird posts. From the video alone, several tabloids claimed the guy in the picture is Jamal while the girl is Harper.

At first, the identity of the girl remained unknown considering the video quality. Nevertheless, it was later confirmed that the girl is none other than Harper. She herself revealed it by sharing a tweet requesting everyone to delete the video, “If you have the video please delete it.”

When the graphic video first surfaced, Jamal immediately apologized to his fans. In a statement, he wrote,

“First and foremost I would like to apologize to my fans. My account has been hacked, currently working on the issue. Thanks,”

After the incident unfolded, the couple subsequently broke up.

Who is Harper Hempel dating now?

Going through her Instagram account, we can see she doesn’t share any romantic pictures with someone whom we can say is her boyfriend. So from her social media activity, it is clear she is not in a relationship with anyone.

On the other hand, her Instagram is filled with joyful pictures from her day-to-day life. From her social media, we can say with certainty, that she is living her life, one day at a time. She also likes exploring a lot of new places, as evident from her photos from a lot of exotic vacations.

What does Harper Hempel do for a living?

As of now, she works as the Social Media Community Manager at Fact & Fiction. She has been working at the organization since October of 2019. In addition, she has been running her own photography company, Harper Hempel Photography since May 2014.

Previously, she worked at All Social Jessie as a freelance Social Media Marketing Manager. Further, during her time at the University of Kentucky, she also worked as the Instructional Coach. She once also worked as the Auditing and Financial Planning intern at the Central Bank.

As of now, her total net worth is around $400,000. She earns the major source of her income through her work as a photographer and a social media manager. On the other hand, her ex-boyfriend Jamal has an impressive fortune of $4 million.