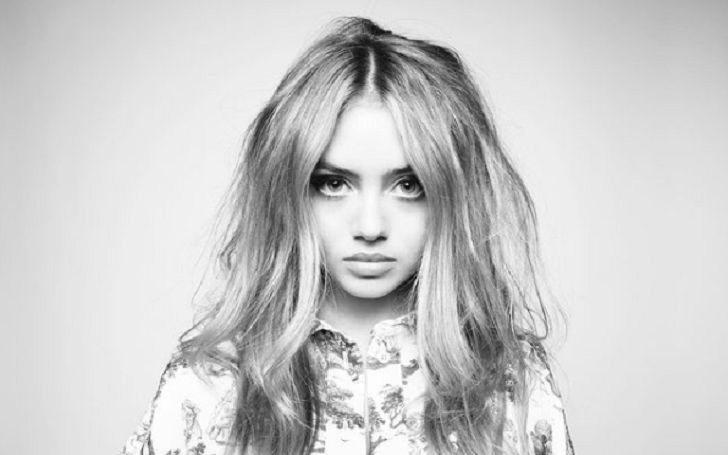 Almost all celebrity kids are destined for fame to some degree, but it is more true for Helene Boshoven Samuel (aka Leni). She is the oldest daughter of supermodel Heidi Klum from her short-lived relationship with an Italian business mogul Flavio Briatore.

Her parents had already split before her birth and her biological father wasn’t with her mother at the time of her birth. Besides, being the daughter of one of the prominent models, is the famed celebrity kid also looking into the glam world?

Find out numerous interesting facts about Heidi Klum’s daughter Leni including her name changed a couple of times and other details!

Her parents were separated before Her birth: Mom Heidi gave Birth to Her in absence of Her biological father

Helene was born in New York City, on 4th May 2004. Her mother was with her then-boyfriend Henry Olusegun Adeola Samuel (best known as Seal), a legendary British artist while giving birth to her daughter Leni. However, the biological father of Helene wasn’t there at the time of his daughter’s birth.

Klum and her ex-boyfriend Flavio, who began dating in March 2003, split soon after the model announced her first pregnancy in December of the year. After their separation, Briatore said the distance between the two “was unbridgeable” as Heidi was in Los Angeles while he was in London.

A representative for German-born supermodel Klum told People that the baby weighed in at 7 lbs. 5 oz. An insider added, “Mother and daughter are feeling great.” A source also revealed that Heidi and Briatore were on good terms and “They will be raising the child together as friends.”

Yes, Helene is adopted by her mother’s second husband Seal. The exes began their lovey-dovey after Klum’s separation from her former boyfriend Flavio.

The two dated for months before they got engaged on a glacier in Whistler, British Columbia in December 2004. And talking about their wedding, it also didn’t take much time as Heidi and Seal exchanged their vows on 10th May 2005. The duo organized their beach wedding ceremony in Mexico.

Her biological father Flavio Briatore, talking on matters of adoption of his daughter with Italy’s Il Corriere Della Sera said,

“Leni is my natural daughter, but the three of us happily agreed that it made more sense if Seal adopted her, because a child needs to grow up in a family.”

He also talked about his relationship with Seal and Heidi in the same interview,

“Heidi, Seal and I have built an amazing relationship.”

“It’s hard to miss a baby that you never see. But I know that Leni is not an abandoned child.”

Talking more about his relationship with his daughter Lene, Flavio, 70, told they used to speak on the phone for two hours a day, “but it wasn’t enough. She needed to stay with her mum.”

What is Her Real Name?

There is a lot of confusion about her real name on the internet. Some sources say that Heidi’s daughter was named Helen Klum at the time of her birth and some other sources suggest her last name changed to Samuel when Seal officially adopted her in 2009.

However, in December 2020 interview with Vogue, the model Heidi put down all the loose talks regarding her daughter’s real name. She told that her name isn’t Helene Boshoven Samuel, but Leni Olumi Klum.

Klum filed for divorce from Seal in April 2012 and their divorce process became final in October 2015. But even after their separation, Leni maintains a very close relationship with her adopted-father.

Heidi herself once stated empathetically that Seal is her father and not Flavio.

Although the relationship of the father and a daughter created headlines in the past years due to Briatore’s no involvement in Leni’s life, it all changed when the duo met at the Cala di Volpe hotel in Porto Cervo in July 2018. According to TMZ, they also embraced each other.

An insider further told the tabloid that Klum moved there along with her entire family, including her parents and her three other kids from her marriage to Seal. Her ex-beau Flavio joined all of them and they dined together.

Is Helene Boshoven Samuel Following in Her Mother’s Footsteps? Her Rising Modeling Career

Yes, the 16-year old girl is following the footsteps of her mother. Leni was always destined to be a model. She first got the opportunity to grace the cover at 12 from the clothing and fashion accessories brand called Brandy Melville. Although it was one of her favorite brands, the then-hoping model had to turn down the offer after her mother didn’t allow her.

Leni made her debut in the modeling world after her first photoshoot for the January issue of Vogue Germany in Dec 2020. The photographer Chris Colls shot the photo of both Helene and her mother Heidi for Vogue Germany. Furthermore, Leni also featured on Mercedes-Benz Fashion Week in Jan 2021.

In addition to modeling, Helene also has an interest in dancing. Her mother told Hello! Magazine in 2018, about her oldest child’s interest in the glam world,

“She wants to dance right now. I’m letting her do what she wants to do. I’m not putting any seeds in my kids’ heads of what they should do. I want them to come up with their own things. They are not really stage kids.”

What About Her Love Life? Does Helene Have a Boyfriend?

Although the model has kept her love life out of the media, one of the articles published on Vogue mentioned that Helene wanted to have a matching tattoo with her boyfriend in her mouth. However, her mother reportedly refused her daughter to do that.

Well, hopefully, the secret couple will soon make an announcement about their relationship.

Leni shares a strong bond with her step-father Tom Kaulitz, Tokio Hotel guitarist. She has also inked the same tattoo as her step-dad Tom and his brother Bill has inscribed on the inside of their fingers. Their friendship tatt features three little dots.

Being the daughter of one of the supermodels, Leni is enjoying a lavish lifestyle. But, the net worth of the young girl is yet to estimate. On the other hand, her mother Heidi’s net worth is $160 million.

Who Is Gracie Calaway? The Untold Truth of The Undertaker’s Daughter