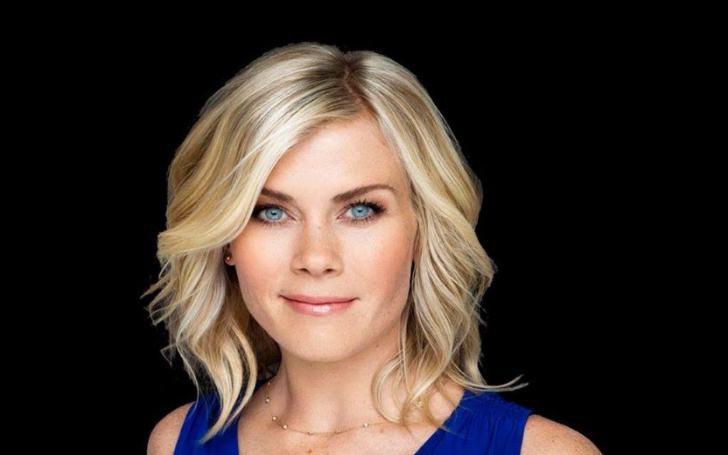 Alison Sweeney aka Alison Jane Sweeney is a well-known American actress widely known for her role as Samantha Sami Brady on the NBC soap opera Days of our lives. The actress from an Irish background has been in the industry for a long time.

Besides her achievements in the entertainment industry, she is also in a marital relationship for a long time. She is married to David Sanov and shares a great relationship with her husband. So, does she have kids with her partner?

Well, find all your answers to your queries regarding Alison Sweeney. Stay till the end to find out other interesting facts about her including her children, family background, net worth, and more.

The beautiful Alison Sweeney was born on September 19, 1976, in Pasadena, California. Her actual birth name is Alison Jane Sweeney. She grew up in a musical family along with her mother Polly Sweeney and father Stender Sweeney. Alison’s mother was an accomplished studio violinist.

Her zodiac sign is Virgo and she holds American nationality. Talking about her ethnic background, she belongs to the Caucasian ethnic group.

Alison Sweeney Has Great Relationship With Her Siblings

Talking further about her family, she was raised with her siblings Ryan Sweeney and Sten Sweeney. She is the middle child while her brother Sten is the eldest and Ryan is the youngest. And like any other sibling, she shares a great relationship with them.

All three siblings are very disciplined and their bonding as brother and sister has always grown over the years.

The actress, Alison completed her basic course in her home town. Later, she continued her studies even after being involved in the entertainment industry. She took evening classes at the University of Los Angeles, California. After that, she graduated in business.

She was Very Active in Sports

The charismatic actress Alison is not only profound in the acting sector but, she was also highly skilled in the sports area. She used to participate in many extracurricular activities since high school.

Alison is highly interested in swimming and kickboxing and is involved in gymnastics. In fact, she is also able to perform the back-handspring. Apart from that, she has also participated in many marathons and triathlons.

Sweeney made a debut in the entertainment industry in the American crime drama television series named Simon & Simon in the year 1984 as Lyla. After that, she appeared in many television dramas like Family Man, Fear Factor, The Biggest Loser, & many others.

Later, she made her movie debut in the year 1987 with the short movie The Price of Life as Young Alice. Soon after her debut, she became part of many other movies like The End of Innocence, Murder, She Baked: A Chocolate Chip Cookie Murder, and Chronicle Mysteries: Recovered, among others. She is still working in the industry and currently working on a Film trilogy named The Wedding Veil.

Apart from her acting career, Alison also directed an internet series named “In Tune“. She also worked as a host for many television programs.

Her Achievements and Awards In Film Industry

Alison Sweeney has been nominated and awarded many times throughout her acting career. She won her first award in 1996 named the Soap Opera Digest Award for the category of outstanding villains for her role in Days in Our Lives.

Sweeney tied the knot with a Patrol officer named David Alan Sanov on July 8, 2000. The couple is still together even after two decades of their marriage. She made a recent post about her husband taking retirement from his work after 27 years of service in the California Highway Patrol.

Alison revealed that her relationship with her husband gets stronger and bold every year. She seems to be very happy and grateful to have such a partner.

Alison is a Mother To Two Kids

Sweeney welcomed two beautiful kids with her husband Dave. She has one son and a daughter. The couple gave birth to their first child named Benjamin Edward Sanov on February 25, 2005.

After that, they gave birth to their baby girl named Megan Hope Sanov, on January 12, 2009. She calls her son Ben and her daughter Meggie. Alison often shares her picture with her kids on her social media account.

She Also Works as a Writer

Apart from her acting, she is also known for her writing career. She has written many books and novels. Some of her most-sold books include The Star Attraction, Scared and Scriptless, Opportunity Knock, and many more.

Alison has also written a book about her life story named All The Days of My Life (So Far) in 2004.

What is Alison Sweeney Doing Now?

Alison has not retired from her acting yet & still appears in different movies and dramas. As mentioned earlier, she is currently working on The Wedding Veil film trilogy in 2022. The actress is happily spending her time with her husband and kids. She mostly posts pictures with her family while traveling.

Alison Sweeney has been able to amass quite a good amount of fortune throughout her acting career. Her estimated net worth is around $9 million as of 2022. As per the reports, she charges $45 thousand for an episode of The Biggest Loser.

She was able to gather this good amount of fortune through her acting, writing, and directing journey. Moreover, her wealth is expected to increase further in the days to come.

Alison Sweeney seems to be very active on her social platforms. She is mostly active on her Instagram handle where she has about 405k followers under the name @alisweeney.

Likewise, she is also active on her Facebook handle with over 855k followers under the name Alison Sweeney.

Where Is Jessica Wesson Now? Her Life Before & After Retirement