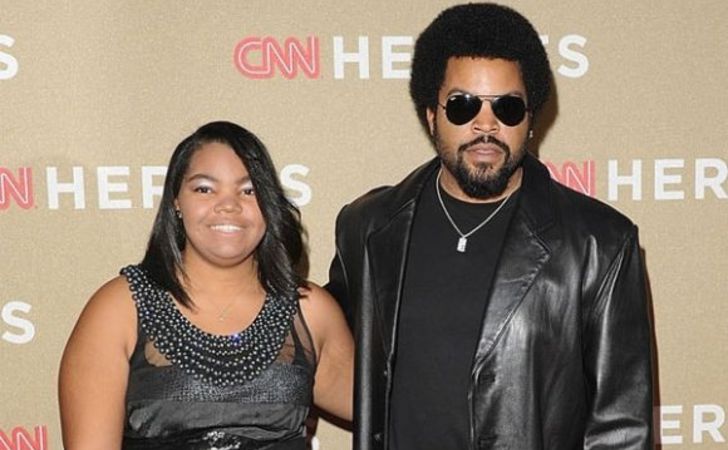 Karima Jackson is an American Philanthropist famous as the daughter of Ice Cube. Though her father leads a successful career as a rapper and actor, she seems to have discovered a different path. Unlike her dad, Karima has completely shifted her professional life away from the media industry.

Reportedly she holds two Master’s degrees from reputed universities. But what about Karim’s love life? Is she married or dating a boyfriend? What is Karima’s relationship with her parents and siblings?

Find out everything you wanted to know about her.

Karima Jackson was born on February 17, 1994, in Los Angeles, California, to Ice Cube and Kimberly Woodruff. Both her parents are successful American rappers.

She is not the only child in her family but rather has four other siblings, Deja Jackson, Shareef Jackson, O’Shea Jackson Jr., and Darrell Jackson.

Well, she shares a great relationship with all her kids, and often makes appearances together. As of 2020, all her siblings are grown up and doing great in their respective fields. While her sister Deja is a basketballer, her brothers have followed their father’s passion for acting and rapping.

Karima’s Parents Are Married Since 1992

It is very rare to see a celebrity couple married for a long time in the Hollywood industry. And Karima’s parents Ice Cube and Kimberly Woodruff are one of those rare couples who are together for decades now.

They got married on April 26, 1992, in a small wedding ceremony. While the duo has now surpassed three decades together, the beginning of their romance is a different story as a whole.

As per the reports, Karima’s father met Kimberly for the first time back in 1988, when she was in a different relationship. But the first glance of Woodruff caused turmoil in Cube’s heart. Well, he explains his first meeting as this,

The first thing I thought I was, ‘Wow, she could be your woman.’ The first time we met, she wasn’t feeling me, she was NOT having it.

Call it fate, they soon got to meet six months later. Well, they soon began dating.

The couple has such a bonding that Ice proposed to his wife for the second time on their 20th marriage anniversary and too in a interesting way. He reportedly bought her a car and asked her to seat in it where he had also placed a ring.

I don’t know if it was considered romantic. I had bought her a new car [a BMW 5-series] and when she went to sit in the car, there was a ring sitting on the seat

Is Karima Jackson Married or Dating a Boyfriend?

Despite being a star kid, Karima has opted to keep her life away from the limelight and so is the case with her relationships.

So far, she has not talked at all about her love life. However, a few sources claim that she is in a relationship with her boyfriend named Horatio Joines.

But since she has not addressed the claims, it is safe to say she is unmarried and not dating anyone as of 2020.

Karima Jackson’s Elder Brother Portrayed Their Father In His Biopic

As we have already mentioned, Karima’s elder brother O’Shea Jackson Jr. is also an actor and a rapper. Known by his stage name OMG, Jackson began his career in 2010.

He is most known for his portrayal of his father’s character in the biographical film about Ice Cube’s hip hop group N.W.A., Straight Outta Compton. His work in the movie was hugely appreciated.

What Does Karima Jackson Do?

AS we said earlier, Karima leads a successful professional life. She began her career as an assistant program director at St. John’s Community Services, while still pursuing a bachelor’s degree. Just for a fact, SJCS is a few of the oldest non-profit organizations in Washington.

Later, in 2014, she founded a charitable organization named Organize Change, Inc, where she is the executive director at present.

It’s unusual for a celebrity kid to not be on social media, but Karima doesn’t seem to enjoy the attention. She is not active on any social media platforms including Instagram, Facebook, and Twitter.

Well, it is always a personal choice.

How Much Is Karima Jackson’s Net Worth?

With a successful professional career, Karima surely makes a good amount of fortune. However, she has been very secretive about her wealth so far. On the other hand, her father Ice Cube has a net worth of $160 million as per Celebrity Net Worth.