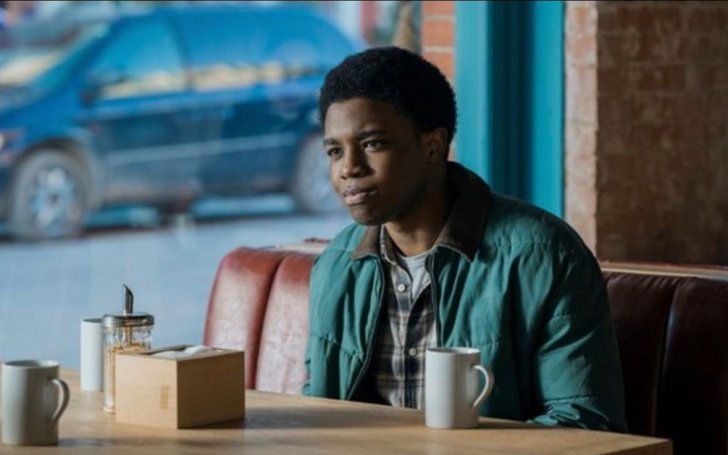 Iman Marson is a promising actor who rose to prominence by portraying Lucas Walker in the Netflix Series Wednesday. Further, Marson also has played some short roles in projects like Breaking the band: Jackson 5, Split Sole, and Nintendo Switch Commercial.

Apart from his professional life, what about his love life? Is Marson dating someone at present? Today, we have come up with some interesting details about the Wednesday famed actor Iman Marson including his age, movies and TV shows, relationship, net worth, and many more.

How Old Is Iman Marson? His Early Life Details

As mentioned earlier, Iman (full name: ‘Iman Isiah Emmanual Marson’) is a newcomer in the movie industry. So, not much information about him is available in the media. However, it is known that he celebrates his birthday on August 3 every year.

Talking about his age, Marson is 21  years of age as of 2022 as per the comment on his birthday post on Insta which says,

Counting on this, Iman was born in the year 2001. He is a Californian and spent most of his early days in Los Angeles, California.

As for education, the emerging actor studied at the Identity School of Acting which is located in his hometown, Los Angeles.

Besides, Marson is American by his nationality and belongs to the African-American ethnicity.

Since his childhood days, Iman always wanted to be an actor for which, in his school also, the emerging talent majored in Acting. Before pursuing his career in acting, he was already awarded as the best male actor in his school performance.

After that, he slowly moved to public space and did some roles in commercials and short movies. Marson played Randy Jackson in ITV Studio’s TV episode Breaking the band: Jackson 5. Then, he also portrayed the character Curtis in s short film Split Sole and Hero Gamer in Nintendo Switch Commercial.

In 2021, Iman got a big break in his acting career. He was signed by the director Tim Burton for Wednesday. He plays the role of Lucas in the series along with Tommie Earl Jenkins, Luyanda Unati Lewis-Nyawo, Gwendoline Christie, Emma Myers, and others.

On September 15, 2021, he expressed his gladness through his Instagram about joining the cast of Wednesday and wrote,

Excited to announce that I have joined the cast of Wednesday. Can’t wait to get to work with these amazing people!

In the supernatural series, he played the recurring character Lucas Walker, Mayor Walker’s son. He appeared in 5 different episodes including If You Don’t Woe Me by Now, Quid Pro Woe, Woe What a Night, Freind or Woe, and Wednesday’s Child Is Full of Woe. More than anything, the Netflix series Wednesday recently got an overwhelming response from an audience, and due to its popularity, Iman got wide recognition as an actor too.

Marson Is A Very Jolly; He Has Good Bonding With His Teammates

As per the video and photos that he shared on his social media account, Iman seems to be a very jolly kind of person. He is lovable with everybody around him and in his working place, he keeps enjoying the little things. He shares a good bonding with all his teammates.

Apart from his nature, Marson likes traveling and photography.

Is Iman Marson In A Relationship With Anyone?

The fact is that Iman has just emerged as an actor so he has not had many conversations with the media and neither media has asked him about his personal life. Further, he also does not seem to be much active on social media. Due to these reasons, we are unknown of his relationship status.

In the meantime, there is also the possibility that a boy in his 20s may have someone special in his life. But until and unless, the actor doesn’t won’t talk about his love life openly, we can’t say anything about whether he is dating someone or is single.

The young actor has an account on Instagram under the username @imanmarson and has over 35.2k followers. His first post on his Instagram was on September 15, 2021, in which he announced his involvement in the horror series Wednesday.

Further, the newcomer actor can be discovered on TikTok also.

He recently appeared in the horror series Wednesday. So, it’s obvious that right now he is occupied with getting feedback from the audience and another production team. Aside from this, there are no updates regarding his upcoming projects.

Iman Marson has an estimated net worth of about $1 million as of 2022. He has earned a major portion of his wealth from his acting career. Looking at his growth, we can say for sure his fortune will raise more in the years to come.

His Height, Weight, And Physical Appearance

Talking about his height, he stands 5 feet and 8 inches tall as per sources. Further, Iman weighed 60 kilograms. The Wednesday actor looks handsome with dark shades of skin color.