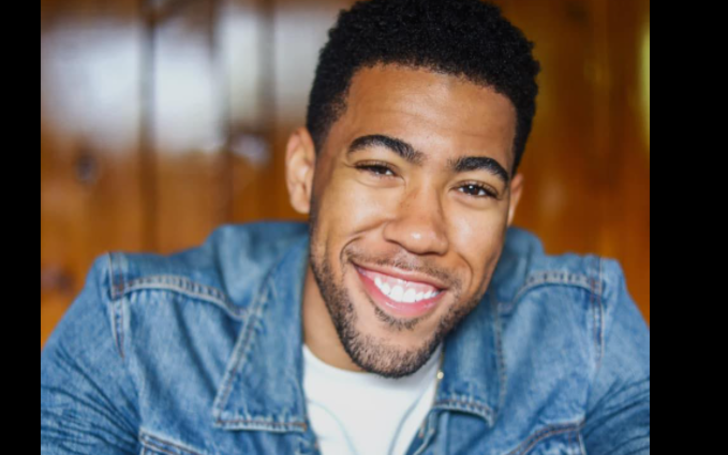 Kevin Mimms (real name Kevin Miles) has numerous commercials under his acting belt. His Jake persona in State Farm’s (an insurance firm) adverts has made his face and voice a familiar one in households.

Known for his iconic red shirt and khaki pants, Jake from State Farm is a man that’s gained ground since debuting in a 2011 commercial. A real State Farm employee, Kevin Miles played the role of iconic Jake Stone which would turn him into a TV celebrity.

He’s been from State Farm’s cubicle to wearing beekeeping suits and appearing in parodies of “The Bachelorette.” Miles has shared the spotlight with athletes and celebrities, such as Alfonso Ribeiro, Chris Paul, Aaron Rodgers, Paul Rudd, and Drake. Know about his early life, career, relationships, and much more in the content below.

Kevin Mimms Is A Chicago Native

Kevin Mimms was born on July 5, 1990. He grew up in Chicago. In an interview with Chicago Tribune, Mimms revealed he is from the South Side area, and Hyde Park was his favorite place growing up. His parents pushed him to pursue acting after seeing his passion for the career. Kevin’s folks were foster kids and they had a rough life.

He Used To Be A DJ

Mimms began acting very young; it was his father who pushed him into the profession, while his mother and grandmother instilled in him a love of theater.

The Chicago native started taking part in acting activities in elementary school. One of his first acting gigs was Romeo and Juliet’s stage play, where he portrayed Lord Capulet’s character.

Following that, he developed a huge passion for the profession.

Mimms’ journey into acting started at Chicago Academy for arts, where he studied Theatre and graduated in 2008. He then enrolled at Webster University (Conservatory of Theatre Arts), where he graduated with a Bachelor of Fine Arts in Acting.

Kevin worked as DJ during his college years in addition to acting and commercials. He was also was chosen to open for Girl Talk in a school event. Unfortunately, for some reason, this couldn’t happen. Mimms, though, still got a chance to open for musicians Rockwell Knuckles and Tef Poe.

Miles may have continued with his DJ-ing act after finishing college, considering the fact that his Myspace profile still lists him as an actor/DJ.

Getting into Hollywood isn’t that easy for all. And Mimms has a struggle story of his own on how he cracked into the media industry.

After, he got a one-way ticket to L.A. with the hopes of starting his acting career. His mother tagged along, helped him buy a used Mustang car before leaving the next day.

Things soon started to get difficult for Kevin. With no apartment under his budget, he had to sleep in the car for a week. Unfortunately, even after finding a place to stay, his financial situation was anything but stable.

With bills and expenses piling up, he resorted to doing odd jobs to earn a living. In the meantime, he continued submitting applications for acting projects.

After a while, he started getting commercial gigs. All of them without an agent. It, however, was not until the State Farm that he started to gain attention.

In the aftermath of his performance on State Farm, he got many opportunities to meet and work with celebrities such as Drake and Aaron Rodgers.

Kevin Mimms Had His Own Startup

Back in the days, Mimms had launched his own business. In 2011, while still in college, he founded the company Animal House Underground.

It started as a college party house, as a way to bring city-style partying to colleges.

Animal House Underground which was near Webster University, would attract students from several neighboring institutions.

It later started to serve students from St. Louis whilst operating from Webster and Washington university campuses.

As for the present, it is unclear whether Mimms’ college day hustle is still active.

How Mimms Got Into State Farm

While working to make the big break, Kevin got an invitation to audition for a state farm commercial. He had been answering phones for the company for ten years. All the candidates appearing for the audition wore red polo and Khakis. Mimms was the only one who sported a white shirt, gray blazer, and jeans. He was in the LA group.

Although the CMO for State farm, Rand Harbert did not see him as his Jake, his wife advised him after seeing Kevin’s call sheet.

Apart from State Farm, Mimms also has an impressive commercials profile. He has appeared on several other ads. The most recognizable is that in Hyundai adverts.

Guest Appearances In Movies And TVs

Aside from commercials,  Miles has also done some guest appearances in some notable TV series. The 31-year-old has appeared in episodes of TV shows S.W.A.T. and Criminal Minds. He has also featured himself in other shows such as Underdogs and the film Emmanuel and Me.

Other acting credits of Mimms include American Typecast, Soda Jerks, Lap Dance, The Last Pick, Innocent, and The tragedy of Mother and Son.

Back in 2013, well before becoming Jake, Miles did a small role in a movie, Jake Squared (the film which credited him as Kevin Mimms’ hence the confusion Miss vs Miles). But Miles didn’t play Jake, he, instead, portrayed the part of “Cool Party Guy.” The following year, in 2014, Kevin played a patron of a lap dancing club in Lap Dance.

What Is Kevin Miles Doing Now?

Kevin, as of the present, doesn’t live in Chicago, having moved to LA after finishing school to pursue his acting career. He, however, has said he still misses the city, especially the culture and the food of the area he grew up.

Also, Mimms still considers himself a native of the town and even refers to himself as “South Side Kev”.

Does Kevin Mimms Have A Girlfriend?

Mimms keeps quite a tight lid on his dating details. He, nevertheless, at one time used to date a girlfriend named Emily Gaither.

Both presumably met at Webster University, where Gaither was also a student studying Costume Design. Kevin and his girlfriend Emily Gaither have also starred in several of the latter’s YouTube videos.

In 2017, Gaither and Mimms appeared in public during the premier of Fairy Tail: Dragon Cry in Hollywood. They, however, never addressed the rumors of them dating.

Also, Kevin is yet to posts anything regarding his romantic views over his social media handles.