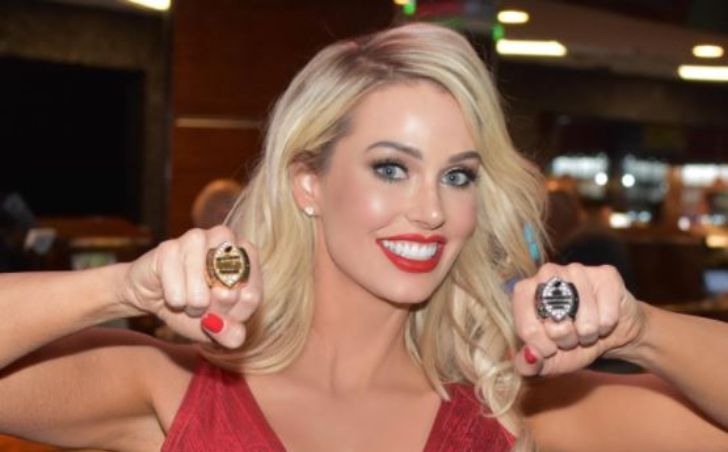 Elle Johnson is an Instagram famous for having appeared in Sports Illustrated and as a globally-trending #PaulHeymanGirl for the #HustleBootyTempTats supermodel brand. Johnson has also worked with a number of popular magazines, including FHM, Sports Illustrated, and Maxim, among others.

Johnson catapulted to prominence for posting revealing photos and finding unique ways to mix in sports. She has produced what feels like millions of shots in various poses.

Elle is not just some girl with a super body, she is also a huge sports lover. And she’s been promoting and glamourizing both for years. In addition to taking pride in her skin, she loves college football, March Madness, her country, the flag, guns, dogs, the Michigan Wolverines, and much more.

She often times has also been part of a few or two controversies. Know what are those along with some other facts relating to Johnson’s personal as well as professional life in the details below.

Elle Johnson Is From Utah

While she is yet to talk about her college education, she allegedly attended South Brunswick High School, in North Carolina.

Elle Johnson Is A Model & Host

As mentioned, Elle Johnson is a bold and audacious model who consistently flaunts her voluptuous and curvy body.

She stands out for revealing a little too much of her bazooms’ split and quite a lot of her buttocks. Not to mention the fancy lingerie and slinky sportswear all one way or the other enhancing her body appeal.

Johnson also occasionally serves as a special guest for several college sporting and such events throughout the country and has a social media following of over 1 million across all platforms.

She was once also a special attendee at Football Central Viewing Party and the Super Pigskin Party held in Jan 2019.

In mid-April 2017, Johnson became the center of controversy when Instagram booted her account for posting pictures which as per the social media platform’s guidelines were provocative.

Apparently, the model’s racy Instagram feeds were just too hot to handle.

After the booting, the blonde model from Utah turned to Twitter to vent her frustrations. She compared the actions of the social media platform to United Airlines’ wrongdoings to one of its passengers (April 9, 2017).

She spoke about the shocking video wherein a United Airlines flight literally dragged off a man from his seat who was heading to Louisville, Kentucky from Chicago.

“Booted off #Instagram again! They treat models like #United treated Dr. Dao. Not the physical abuse part-the random get off the plane part!”

Elle Johnson Says Instagram Was Not Being Fair To Her

While talking to The Smoke Room the same month, Johnson explained her dismay with the photo-sharing site. She said despite her posting nothing different from what SI_Swimsuit (Sports Illustrated Swimsuit Insta handle) or other “men’s mags” post on Instagram, the Ig took the life of her account.

“If Instagram is really serious about not allowing “sexually suggestive photos” on their platform, they better get cracking,”

added the model who loves to upload her scantily-clad pictures.

She also pointed to the fact that – Ig was okay with SI_Swimsuit’s picture of Nina Agdal posing with sand over her bare c*****e  but not hers.

Johnson said while she knew Instagram’s terms of use allow them to disable accounts for any reason, it was discriminating of the platform to disable her handle.

Several other publications and her fans alike supported the outcry Johnson against Instagram. Some group of fans even went to express rage after having to miss out on all of the hotness of the mountainside girl.

“The look on my face after #instagram gives me my page back. I think I’m gonna buy a bunch of stuff for #AmazonPrimeDay to celebrate!”

The look on my face after #instagram gives me my page back. I think I’m gonna buy a bunch of stuff for #AmazonPrimeDay to celebrate! pic.twitter.com/LsW6K3Nc3z

This booting off however was not the first time Instagram questioned and put off her moblog. The multibillion-dollar networking platform from Meta had also booted her off back in January 2017.

At the time, however, she was able to quickly restore her account with the support of her followers’ outrage. Luckily, Twitter has never used such actions against her.

Elle Johnson Supports Other Women For Their Clothing Choice

A month after her first expulsion from Insta, Johnson spoke in support of a woman passenger who the Spirit Airlines had kicked out from their flight for showing too much cleavage in Feb 2017.

The incident had happened amidst the take-off of one of the Spirit’s flights.

ABC Local 10 Miami reported an unidentified South Florida woman claiming she had to ditch the flight from New Orleans to Fort Lauderdale because of her sense of style.

Johnson Says She Is Never Flying In Spirit Airlines

After knowing this, Johnson became extremely critical of Spirit online.

In the wake of Spirit Airlines kicking out the Floridan woman due to revealing cleavage, Elle took on the flight company with a spate of #FreeTheCleavage posts on social media.

“Guess which airline I will NEVER fly?! #SpiritAirlines should be ashamed! You know how hot it gets in the cabin? #FreeTheCleavage,”

she wrote on her Instagram. The shapely Instagram model Elle Johnson likewise added, “It’s #FriskyFriday! And #Superbowl Weekend! Where will I go? Don’t know. All I know is it won’t be on #SpiritAirlines! #FreeTheCleavage.”

Does Elle Johnson Have A Boyfriend?

Given Johnson is game to share what normal people might hesitate, The #FreeTheCleavage crusader is still shy and seemingly reserved to what-about of her partner. One that her followers could say “someone special to her.”

While she occasionally poses alongside some men for her social feeds, she is yet to throw those red heart emojis on any of them.

For now, the suspense remains about who her beloved is or if does she have any boyfriend in the first place.