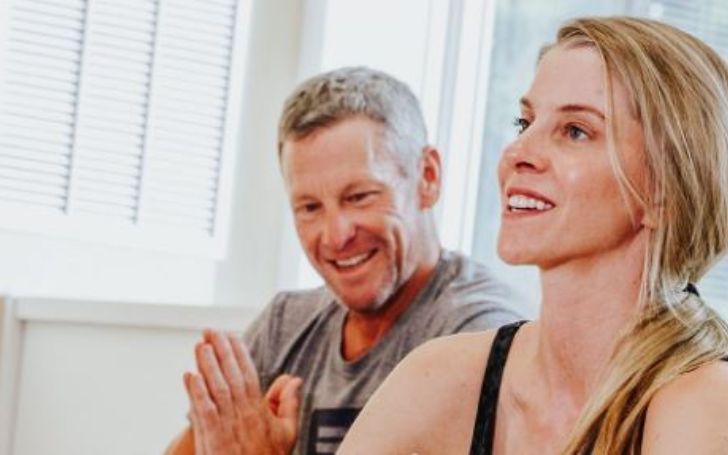 Anna Hansen is a certified Yoga instructor, busy mother, and health activist. She though is better known as the partner/fiancee of Lance Armstrong, a former professional road racing cyclist. Anna’s boyfriend, Armstrong was once famous as a sports icon for winning the Tour de France seven consecutive times from 1999 to 2005. He, though, had to give up it all following a positive doping scandal results.

Although Armstrong has had a fair share of down moments in his life, somebody that rallied around him was/is Anna Hansen.

Learn what made her be so and how strong is really the bond between Hansen and the father of her two children, Lance Armstrong. Along the way also read about healthy rituals Anna swears by, how she discovered her practice, where she finds inspiration, and much more.

The currently 40-year-old Anna was born in May 1981/1882. Lance’s partner, Hansen is the youngest child of David and Sharon. She has an older brother named Matthew. She studied Biology at CU Boulder.

Hansen got her first job out of college through the school’s pre-med honor society. Anna also spent a year in France teaching English. This was just after her college graduation.

During her time in France, she had become a companion and board member for Camp Wapiyapi. It is a summer camp for children facing cancer. While she is no longer on the board of Wapiyapi, Hansen still hosts charity bike rides for it.

Anna Hansen Is A Yoga Teacher

Hansen started practicing yoga when studying Biology at CU Boulder, but it wasn’t until after having kids many years later that she really committed to a regular yoga practice.

She did her teacher training in Austin TX (without intending to actually teach), and she totally fell in love with teaching. In the present, the daughter of David Hansen, Anna Hansen has her own Yoga Studio, MOVE with Anna.

While she also offers in-house services, Anna mostly teaches through virtual approaches. As such she owns a yoga channel on Youtube with the same name, Move with Anna.

Through this, she offers a wide range of classes from full-length, well-rounded yoga classes, and gentle restorative classes, to shorter core blast or stretching series workouts for all types. Soon to be the wife of Lance Armstrong  has classes that range from 60-to 15 minutes

Of her Yoga, Hansen says the movement is medicine for one’s body and mind. Anna believes yoga is for everyone, that breath and movement nourish our bodies and minds in a healing way. The style of yoga she teaches most often in the studio is vinyasa flow.

She Was Also A Social Worker

Hansen is also the former program director for a Colorado non-profit First Descents. It is an organization that provides outdoor adventure experiences for young adults who have cancer.

In the past, she also used to spend time volunteering at Denver Children’s Hospital in the Oncology Ward — near her and her partner’s home in Colorado.

Per TMZ, Armstrong and Hansen have been together for more than 10 years and have two children together: Max and Olivia. Armstrong is Anna’s 10 years senior. The Colorado native Hansen and the ex-all rounder rider met in 2008.

The couple met through Armstrong’s charity work where Hansen was working.

When the former Motorola team member met Anna, she was working as the program director for First Descents, a nonprofit organization in Colorado that gives young adults career outdoor experiences. Hansen and the ex-Texan cyclist officially started dating in July 2008.

Nine years later, in March 2017, the man who lost his Tour de France proposed to Hansen in the middle of the lake, Austin, in his home state of Texas.

After the proposal, Lance and Anna both took to their respective Instagram accounts to announce their to-be-married news. The post showed the couple on a boat together on Lake Austin with an engagement ring on Hansen’s hand.

What Hansen Has To Say About Lance’s Doping Scandal?

Despite all Lance’s doping struggles and the controversy, Hansen has been by his side. It’s something that Armstrong has been thankful for as he has talked about it on social media from time to time.

Armstrong considers Anna as a pillar of strength and love for him and their entire family. Anna also has significant credits in her partner, Lance’s documentary that provides an insight into his personal life and his previous relationships in addition to his drug scandals.

The father of five admitted doping in January 2013 during an interview on the Oprah Winfrey show. The investigator by the US anti-doping agency found Armstrong guilty of running “the most sophisticated doping scheme in sport”

The former cyclist admitted that his kids also inspired him hugely while coming clean about his doping struggles.

Before, Hansen, Armstrong was husband to Kristin Richard—with whom he has three children, a son, Luke, and twin daughters, Grace and Isabelle. Armstrong and Richard were together from 1998 to 2003.

After breaking up with Richard, Hansen’s partner was also engaged to singer Sheryl Crow. Lance was also in a relationship with actress Kate Hudson.

Hansen and her husband found themselves in a bit of controversy in late 2014 after the former tried to take the blame for a car accident that occurred on December 28, 2014.

USA Today at the time reported, that Armstrong hit two parked cars after he had been drinking and failed to report the incident.

Meddling with the incident was Hansen who originally tried to claim that it was she who had been driving.

Hansen initially told police she had been heading home from an Aspen Art Museum party when she lost control of Armstrong’s GMC Yukon on the icy roads. After that, she added she hit the cars. She then claimed of driving the vehicle because “Lance had a little bit to drink.”

Apparently, it, however, was Armstrong who had hit two parked cars after a night of partying in Aspen. The man who had rented one of the damaged cars told a police detective that Hansen came running up to his house in high heels, apologizing and promising to pay for the repairs.

The renter at the time reported Anna saying to him,

‘I’m Anna, we’re the Armstrongs, my husband’s Lance, he was just driving maybe too fast around the corner or something.’

He called the police to report a hit-and-run. He added Hansen and her then-boyfriend left the scene before police arrived. The investigators then interviewed Hansen, who eventually told them Armstrong was driving, but they had both decided to let her take the blame.

Explaining why she was willing to cover up for her partner, the yoga teacher said,

“We’ve had our family name smeared over every paper in the world in the last couple of years and honestly, I’ve got teenagers, I just wanted to protect my family. I thought, gosh, Anna Hansen hit some cars, it’s not going to show up in the papers, but Lance Armstrong hit some cars, it’s going to be a national story.”

She nonetheless didn’t face any serious charges. Later, Aspen police cited Armstrong for failing to report an accident and speeding on Jan. 12 after the Dec. 28 accident.

What Is Anna Hansen’s Partner, Lance Armstrong’s Net Worth?

Anna Hansen’s partner by and large has been reported to have a net worth of roughly $50million. Though at the height of his cycling career, the former athlete had an approximate wealth of over $125million. Most of his fortune took its toll after the revelation of his doping scandal.

Further older reports suggest he lost about $200million worth of endorsement deals in midst of performance-enhancing drug use.

Lance, however, with a smart investment in a multi-billion dollar business, Uber backtracked his financial standings. It all began in 2009 when he invested $100,000 into the driving app and after the company became successful Armstrong’s funding also benefited hugely. Bloomberg reports his investment in Chris Sacca’s Lowercase Capital returned him about $30million.