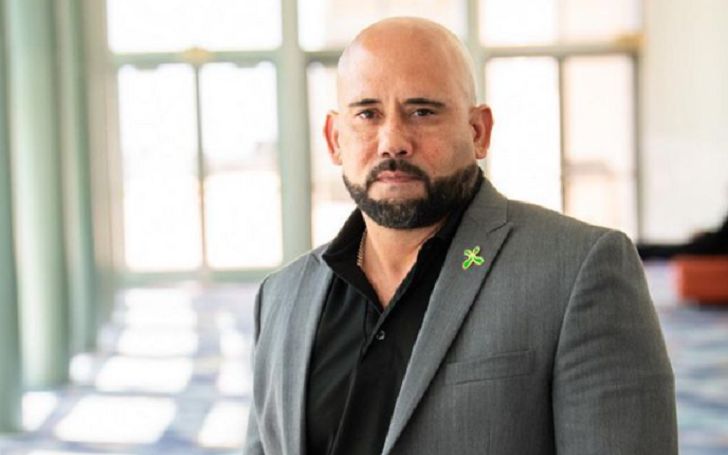 Arbello Barroso (aka Arby Barroso) gained attention as an ex-husband of Matt Damon‘s current wife, Luciana Bozán Barroso. The former flames were married for years before they both moved on with different people. The exes share a daughter too.

After their divorce, Arbello has been in marital bliss with the new love of his life. The two are also proud parents of two children.

Besides, Barroso is the co-founder of Green Roads, the well-established private company specializing in hemp-derived CBD. He previously worked as a real estate investor. Take a look at several unknown facts about Luciana Barroso’s ex-husband Arbello.

He was born on 24th August 1970, in Florida. Barroso remains low-profile when it comes to his early life and family details. Back in April 2020, Arbello shared a rare throwback photo of his parents from his graduation day on Facebook.

He also has a sister named Ginette Blitzer.

Arbello attended Pace High School in Pace, Florida, graduating in 1989. He then studied at the University of Miami. Furthermore, Barroso enrolled at Grind University and earned an MBA in CBD.

First Introduced to Opiates After His Football Injury

He used to play football in the past, but he left the game after his injury at the age of 23. However, following the injury, Arby started using opiates to treat the pain. In the meantime, he became more addicted to opiates. As a result, Barroso was arrested several times and even spent five years on probation, which ended in 2016.

Arby started a CBD business along with his pharmacist Laura Baldwin Fuentes, forming Green Roads in 2013. The company has since developed many CBD products, including oils, liquids, gummies, and creams. It has operated in several locations with 7,000 stores and 1,000 physician’s offices.

Green Roads has around 100 employees in its new headquarter in Deerfield Beach. With its exponential growth, the company has also been pretty successful financially. It generated around $45 million in revenue in 2018.

Furthermore, the most significant health and wellness CBD company has also won numerous accolades over the years. It is considered one of the best privately-held CBD companies in the United States.

Also, Arby is the co-owner and co-host of Cannabis Life Radio. He is also the Chairman of the Medical Marijuana Advisory Board.

Was Previously Into Real Estate Business

Before starting Green Roads, Arby spent many years working in the real estate world as per his Linkedin bio. He spent more than eight years working as a broker for the American R.E Crop from Feb 1996 to October 2004.

In March 2003, Arbello joined Vesta Real Estate & Home Loans in South Florida. He became part of the company until June 2010. Sources say Arby quit his real estate career due to his financial crisis.

He then started a pain-management clinic, which also wasn’t successful.

Barroso was in a marital relationship with Luciana Barroso for years. The couple kept their marriage details to themselves throughout their relationship. So, the information about their wedding and other details are still unknown.

The two welcomed a daughter named Alexia Zavala in 1999. Alexia went to New Roads School and now studies at The New School. Nonetheless, the couple divorced a few years after their daughter’s birth.

Luciana then moved on with renowned actor Matt Damon. She first met her future husband Matt while filming Stuck on You in Miami in April 2003. After some time, the two secretly started dating and got engaged in Sept 2005. Shortly after their engagement, the two tied the knot on the 9th of December the year. Their low-key wedding took place at the Manhattan Marriage Bureau. They are in a blissful marital relationship ever since.

The adorable couple is also blessed with three children. Matt and his wife Luciana welcomed their first child, a daughter Isabella Damon in 2006, followed by Gia Zavala and Stella.

According to reports, the actor adopted Alexia, but he is yet to confirm the fact. Matt shares a very close relationship with his reportedly adopted-daughter, Alexia. Her biological father Arbello, in a rare interview with Star Magazine, praised the role Matt has been playing as a dad to Alexia,

“I couldn’t possibly have asked for a better stepfather for my daughter than Matt. He treats Alexia like she is his own flesh and blood. Matt has been an absolute blessing for my daughter.”

Besides, the young girl loves soccer. She also looks like she is following her father’s career paths. She played a minor role as a member of the zoo staff and Matt in the 2011 movie. We Bought a Zoo.

Meanwhile, back in May 2020, the actor revealed that Alexia contracted the coronavirus in New York City.

Who is Arbello Barroso Married to?

For the past several years, Arby has been married to Jessica Barroso. He tied the knot with his second wife, Jessica, on 18th Jan 2008.

Besides, as per Jessica’s FB post shared on December 25, 2017, the two started dating in 2004 and were in a relationship for four years before their wedding.

The couple also shares two kids. They welcomed their first child, a daughter Bri on 23rd April 2008. Their second daughter’s name is Sammy.

Being the Co-Founder of one of the successful CBD companies, Green Roads, Arby has undoubtedly earned a good fortune. He has a $2 million net worth in 2021.