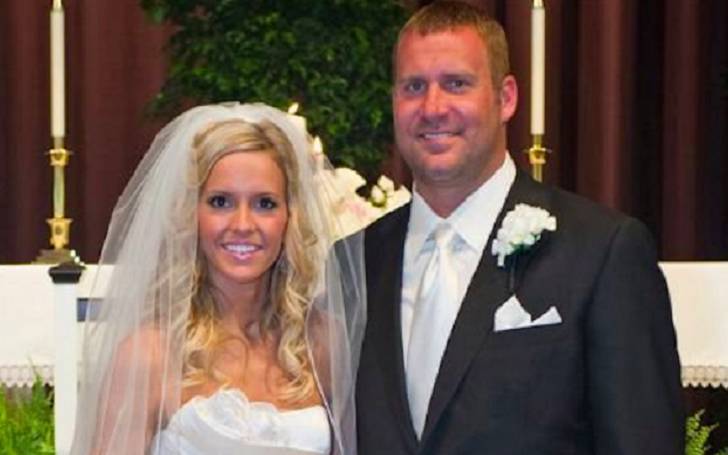 Ashley Harlan is the famous wife of former NFL quarterback Ben Roethlisberger. Even though she couldn’t make her name in the sports world as her husband, the now-famed celebrity spouse was heavily involved in sports during her youth days. Ashley played sports during her school and continued playing softball at St. Francis University. As of now, Ashley works as a Physician Assistant.

Besides, talking about Ashley’s marriage to Ben, the duo has been leading a wonderful marital relationship for over a decade. They are also blessed with three children. The pair tied the knot in the star-studded wedding ceremony.

Today in this article, let’s know in detail about their love life alongside many unheard facts about Ashley!

Who Are Ashley Harlan Parents? Grew Up in a Christian Family with Two Siblings

Ashley Harlan was born on 17th July 1985, in New Castle, Pennsylvania to her parents David and Jeannie Harlan. She was raised in the finest Christian family in New Castle along with her two brothers; Brandon Harlan, a teacher near Grove City, and Brent Harlan. The latter is an accountant in New Castle.

Her parents used to live in a ranch-style home in rural Hickory near New Castle.

Ashley Harlan Played Several Sports at both School and College

Harlan went to Laurel High School, graduating in 2004. There, the then-sports-enthusiast got involved in various games. Harlan who was always interested in sports used to play for hours in the church gym before devolving multiple skills of playing at the school. She widely played volleyball, basketball, and softball at the time.

One of her volleyball and basketball coaches Terry Watters told Trib.Live that Ashley, “was one of the socialites, one of the most popular girls in school.”

Furthermore, Harlan was also a part of the homecoming court. She played for the volleyball team in 2000, winning the WPIAL Class AA championship that season. She later went on to enroll at St. Francis University in Loretto and earned a Master’s in physician assistant science in 2009. During her time at the University, the multi-star athlete played softball.

What does Ashley Harlan do for a Living?

Ben Roethlisberger’s wife currently serves as a physician’s assistant in Pittsburgh, Pennsylvania. She also practices at the University of Pittsburgh Medical Center. Working under the supervision of a medical doctor, the physician assistant supports a variety of patients in fields like oncology and orthopedics as well.

The couple first came across at First Alliance Church in New Castle, Harlan’s hometown back in 2005. Initially, both of them weren’t too serious about their on-and-off relationship but with time it all changed into undeniable chemistry. The couple dated for nearly five years before they got engaged. Their engagement news came out around seven months before the couple tied the knot in a renowned wedding ceremony.

Their Star-Studded Wedding was Attended By Around 600 Guests

Ashley Harlan and Ben exchanged their vows on 23rd July 2011. The couple held their wedding at Christ Church at Grove Farm in Ohio Township, where the duo used to worship. Jerry McCauley, a representative for Ben said Trib.Live that the former The Steelers quarterback first asked for permission from Harlan’s father and brothers to marry her. McCauley said,

“If Ben’s life was still in disarray, Dave and Jeannie Harlan would not have given permission. He has made quite a turnaround.”

In the meantime, Sabrina Lane Graham, a former softball coach at St. Francis told that Harlan’s intention to marry a star athlete is not to get any attention.

“For me, Ashley is Ashley. She would not be doing this if this isn’t who she was meant to be with. … She is not looking for attention.”

Besides, looking back at the stunning matrimonial ceremony of Ashley and her husband Roethlisberger was quite costly. To set up a big event that lasted for over a week, there was around two dozens of team masters and carpenters. Their wedding reception in the David L. Lawrence Convention Center was attended by around 600 guests.

Ben spent around $113,265 to rent the Spirit of Pittsburgh Ballroom, 10 meeting rooms, and every parking spot. But, Ben paid separately for catering, floral decorations, additional security, and more.

Besides, the newlywed couple requested everyone who was present in the ceremony to donate to the Ronald McDonald House and Children’s Hospital of Pittsburgh of UPMC.

After their marriage, Ashley moved to the six-bedroom house in Hampton. Her husband bought the nearly 11,000-square-foot mansion for over $2 million.

How Many Children do Ashley Harlan and Ben Roethlisberger Have?

The couple is the proud parents of three kids. They welcomed their first child, a son Benjamin Jr. in November 2012. Their second son, Baylee Marie Roethlisberger was born on March 19, 2014.

Moreover, on May 26, 2016, Ben Roethlisberger’s wife gave birth to their third son. A day after his birth, the football quarterback announced the big news on his Facebook with a photo of their newly-born baby boy and two then-growing kids. He wrote,

“We want to wish the #Pens ‘Good luck’ for Game 7! Bodie was born this morning and weighed in at 7 pounds, 7 ounces and he’s 21 inches long. God is good!! #LETSGOPENS!!” — Ben, Ashley, Ben Jr., Baylee, and our newest addition to the family, Bodie Roethlisberger.”

As of early 2022, the lovebirds live a blissful marital life with their three children.

Back in 2008, the former VIP casino hostess Andrea McNulty filed a rape case against Roethlisberger. Two years later, a college student also accused Ben of sexual assault. But, the charges were dropped due to a lack of evidence.

What is Ashley Harlan Net Worth?

Her estimated net worth is $500k. She is also paid a considerable salary as a physician’s assistant. On the other hand, Harlan’s hubby Ben Roethlisberger’s estimated wealth is $100 million. He made around $54 million from his multiple endeavors within a year from June 2018 and June 2019.