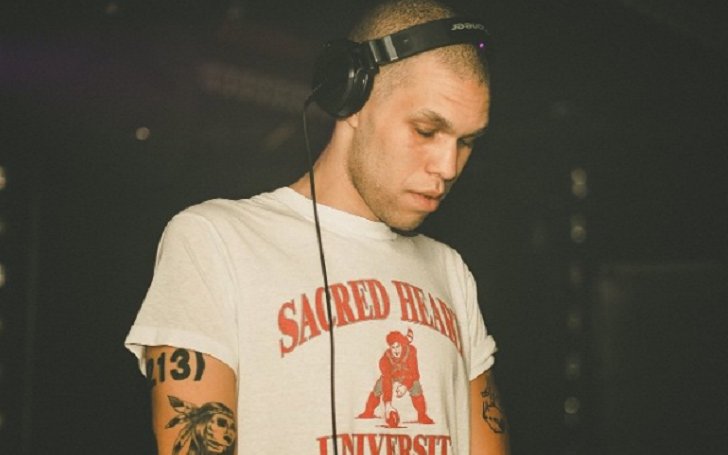 Brandon Avery Perlman, better known by his stage name Delroy Edwards, is a music artist and an accomplished DJ based in Los Angeles. He is a founder of the record label L.A. Club Resource and now runs it along with his managers and partners Henoch Moore and Jimmy Mock.

In addition to his musical career, Perlman is better known as the son of Ron Perlman, an actor who gained attention for his work on the television series Beauty and the Beast. Besides, Brandon’s Afro-Jamaican mother Opal is a jewelry designer. But the big question is if his parents are still married. And what about his own love life? Is Brand married to someone?

Well, here are numerous facts that you didn’t know about Ron Perlman’s son!

Perlman was born on 28th March 1990, in Los Angeles, California to Ron Perlman and Opal Stone Perlman. Back in May 2018, the artist shared a throwback photo with his mother and captioned it, “I love u mom.”

He spent most of his childhood days in Los Angeles along with his family. As for his academic qualification, Brandon went to New Roads School.

He Grew Up Along With His Sister

Brandon has an older sister, Blake Perlman, born in 1984. Blake has an interest in acting and also has a few acting credits, including Archer and Hand of God. Back in 2017, the actress appeared in the comedy Pottersville along with Michael Shannon and Judy Greer.

Despite being the son of one of the legendary actors, Brandon, aka Delroy Edwards has chosen a different path. He is now a musical artist. Listening to different genres of music like post-punk, industrial, funk, and R&B, Perlman developed a strong passion for music very early. As a matter of fact, he used to go to noise concerts frequently.

Influenced by his exponential growth in music, his parents soon bought him a drum kit. His mother Opal, who was a gangsta rap and dancehall fan, introduced her son to underground hip-hop and cassette culture.

He took professional training in Jazz drumming. Furthermore, Brandon went on to enroll at the California Institute of Arts to study music.

He Is the Founder of L.A. Club Resource

At the age of twenty, Delroy Edwards moved to New York City to further explore the musical world. He soon started working at A1 Records with Ron Morelli, the founder of a record label, L.I.E.S. based in Brooklyn, New York.

The label quickly became a hit. Praising the record label, Pitchfork Media said it is “one of the most significant and encouraging developments in American underground electronic music in years.”

After L.I.E.S.’s success, Delroy went on to create his own record label L.A. Club Resource. The tastemaking magazine Fader named the label as “one of the best new labels of 2014,” describing its sound as “textural house music emanating from lonely bedroom studios.”

Besides, Delroy runs L.A. Club along with Henoch Moore and Jimmy Mock. In addition to that, Brandon is also the owner of Gene’s Liquor, the underground hip-hop reissue label.

The multi-talented artist has released studio albums like Teenage Tapes, Hangin’ at the Beach, Desert Sessions, and more. His singles include Heart and Soul, Stop It Baby, and When I Think.

Know Something About Brandon Avery Perlman’s Father and Mother

His father Ron, an actor has worked in a number of movies and TV shows since his debut in the acting world in 1979. He initially performed in several stage production before landing his first acting role in the TV series Ryan’s Hope in 1979. Two years after his debut, the actor scored his first silver-screen role in Quest for Fire in 1981.

Ron has since worked on numerous hard-hitting on-screen projects such as The City of Lost Children, Hellboy II: The Golden Army, Cronos, and more.

On the other hand, Brandon’s mother Opal is a skilled jewelry designer and an owner of Opal Stone Fine Jewelry. She is also the owner of a luxury handbag line that was launched in the early 2010s.

No, Delroy’s parents, Opal and Ron went their separate ways back in late 2019. The actor filed for divorce from Opal in November 2019 citing irreconcilable differences as the reason for the downfall of their marriage.

The couple, who married on Valentine’s Day 1981, called it quits after nearly four decades of togetherness. Their divorce proceeding is still going.

Meanwhile, the court has already given permission to Ron to marry his new fiancee Allison Dunbar, his StartUp costar. The new lovebirds first spotted together six months before Perlman filed for divorce and they have since been together.

Brandon Avery Perlman has racked good fortune from his musical career. His estimated fortune is $500,000 as of 2023. On the other hand, his actor dad Ron has an estimated net worth of $15 million. He has earned the majority of his wealth from his acting career.

Does Brandon Avery Perlman Have a Girlfriend? Details on His Wife Too

Brandon isn’t dating anyone publicly. The artist has posted romantic photos with a few unknown girls on his Instagram but has yet to announce anyone as his girlfriend. He remains quite confidential when it comes to his dating life.

Although the artist has remained silent for years about his love life, Brandon eventually came up with his relationship status in April 2022 with a photo of his wife and their newly born baby boy on Instagram. He wrote the caption,

However, neither Perlman nor his mysterious wife talked more about their marriage. But, they look like they are married for a few years now. Besides, they welcomed their first child, a son Benicio Perlman in March 2022.

Yes, Brandon is a biracial son of an Afro-American mother Opal and a white father Ron whose ancestors belonged to Hungary and Poland. He is an American by nationality.

What is His Height?