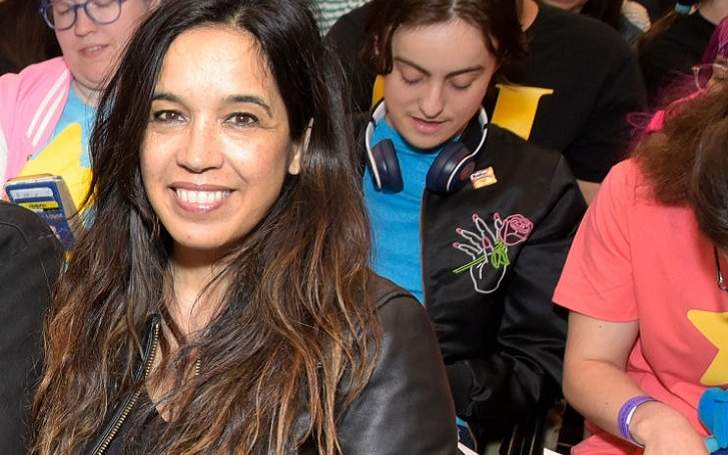 Connie Angland is the sixth wife of one of the versatile entertainment personalities Billy Bob Thornton. Before Connie, the Hollywood heartthrob went through five failed marriages; the last one was with Angelina Jolie that ended bitterly after two years of marriage.

Although Thornton wasn’t initially convinced to get involved again in conjugal life with Connie, the two eventually married in 2014 after over a decade of togetherness. And the couple is still going pretty strong. Besides, let’s also know, does Connie have any kids with her husband Billy? How did the two first meet?

Well, here is everything you need to know about Billy Bob Thornton’s sixth wife Connie including her adoptive parents, professional endeavors, and more. Let’s check out all the facts mentioned below!

Connie Angland is the adoptive daughter of Walter Murch: Details on Her Early Life and Biological Parents

Connie was born Constance I Angland on 22nd October 1964, in a small town in Northern California. She is the adoptive daughter of an Oscar-winning film director Walter Murch and Aggie Murch. Her adoptive parents married a year after her birth in 1965. It’s been over five decades that the couple is married and their marital relationship is becoming strong day by day.

While there is more about her adoptive parents, the information regarding Connie’s biological parents is, however, still unavailable on the media.

As for her childhood, Angland spent most part of her early days in her hometown of Northern California.

Besides, Connie’s sister Beatrice is the web designer at MurchStudio. She is also the owner and photographer at Beatrice Murch Photography. Talking about her education, Beatrice went to Stevenson Shcool and later studied art history at Williamette University.

What is Her Age? Her Ethnicity

As of 2021, Connie’s age is 56. For her ethnic background, Angland is Caucasian. She belongs to American nationality.

Who is Connie Angland up to these days? Her Professional Career

Connie is a makeup effects crew member by profession. Over the years, Billy Bob Thornton’s wife has worked in dozens of videos and TV shows. She began her career by working as an animatronic engineer in Arachnophobia in 1990. The following year, Angland worked as a purchasing agent in Naked Lunch.

Throughout the 1990s, Connie became part of several on-screen projects such as Demon in the Bottle, Puppet Master 4, Pet Shop, Arachnophobia, Men in Black, Phantoms, and more. In 1997, the celebrity spouse served as an art department crew in Mystery Monsters.

Besides, Angland was special effects technician at Big Mama’s House in 2000. Her other credits are Planet of the Apes and Men in Black II as well.

Billy Bob and his fifth wife Angelina Jolie married in 2000. The two also appeared together in the movie Pushing Tin in 1999. However, soon after their nuptials, their marriage hit the rock because of their eccentric displays of affection and contrasting lifestyles.

In 2002, Jolie filed for divorce. The same year, Connie and Billy met when both of them were on the set of Bad Santa (2003). Her future spouse played the main role of Willie Soke, a professional thieve in the movie. Source believes that the couple started dating in 2003.

Welcomed Their Daughter After a Year of Dating

Billy Bob Thornton’s wife Connie Angland gave birth to their first child, a daughter Bella on 24th September 20o4, in California. Their baby girl weighed in at 6lb. 1 1/2oz. A couple of weeks after her birth, Connie and her baby girl Bella accompanied Thornton at his incorporation program on the Hollywood Walk Of Fame on October 7, 2004, in Hollywood.

Talking about their pregnancy, it was announced in June 2004 that the couple was expecting their first child in October of the year.

Back in Jan 2005, in an interview with ET, the actor shared his fatherhood experience and the bond between him and his then-toddler daughter,

“They say there’s this thing between a father and a daughter and it’s true. Already there’s this bond. It’s pretty wild, especially with a girl. It’s a different experience.”

In the same interview, Thornton said of her daughter’s personality,

“She’s fiery. She has two speeds — She’s either peaceful and sweet or telling you exactly what the deal is!”

Although the actor became a father three times long before, it was a new experience for him. He stated,

“I haven’t been the father of an infant for a long time so it takes some getting used to again.”

Besides, Billy has three children from his previous relationships. He shared a daughter, Amanda with his first wife Melissa Lee Gatlin. He also has two sons Harry James and William from his fourth wife Playboy model Pietra Dawn Cherniak.

The long-lasting couple exchanged their vows on 22nd October 2014. They dated for around 12 years before the duo walked down the aisle. For their private wedding ceremony, it took place at their home in Los Angeles. Only their close friends and family members attended the wedding.

As we have talked earlier that the Golden Globe-wining actor wasn’t ready to tie the knot with Connie (his sixth wife) because of his bad past in the marriage department. He first married Melissa Lee Gatlin from 1978 to 80. For the second time, the actor went on to marry actress Toni Lawrence in 1986. However, their marital relationship ended the following year.

Thornton later tied the knot with Cynda Williams for two years from 1990 to 92. And his fourth wife was Pietra Dawn Cherniak. The two married in 1993 and divorced in 1997. For the fifth time, Thornton went on to marry an actress Angelina Jolie in 2000. Their marriage also dissolved in 2002.

Despite all that, the conjugal life Billy has shared with Connie is going pretty well.

Although Billy was in a committed relationship with Connie, the actor was once accused of cheating on his wife with Amber Heard, Jonny Depp‘s then-wife. The rumors regarding their reported romance surfaced when Billy and Amber worked together on the film Landon Fields in 2015. But later the actor denied all the rumors.

As of now, Billy is in a blissful relationship with his sixth spouse Connie.

Where Does Connie Angland Live?

Angland currently resides in her house in California Hills with her family. Her actor husband bought the house in April 2021 for over $3.1 million. The 3,099-square-foot home in Agoura Hills features 5 bedrooms and 3.5 bathrooms.

As per sources, Connie’s estimated fortune is $300,000 as of 2021. Most of her wealth comes from her acting career. Besides, her hubby Billy Bob’s fortune is $45 million.