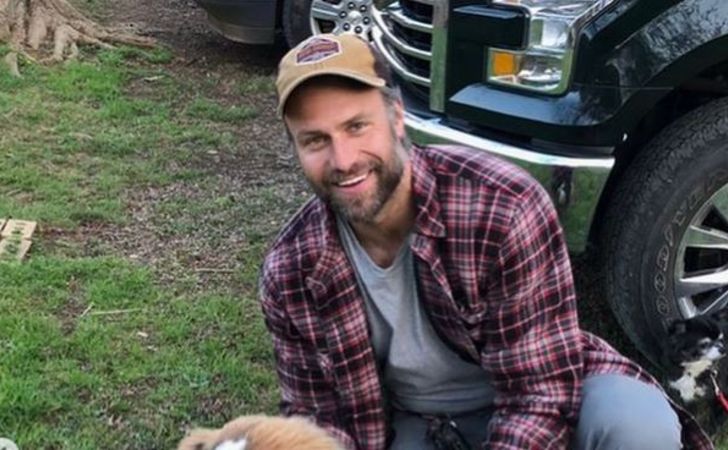 David Lemanowicz is a Canadian ice hockey player and has earned a decent identity as a sportsman. However, he is primarily recognized as the husband of a popular American actress, television personality, and model Jill Wagner.

A few years into a successful marital relationship, David also has a child with his wife. Apart from Jill, Lemanowicz has been in an unsuccessful marriage with his first spouse Gina as well.

Well, here we are going to tell you the reason for his unsuccessful love life in the past and his life at present. Also, find his age, height, career, net worth, & a lot more.

Later after quitting Ice hockey, David reportedly joined the University of Texas-Pan American through the Reserve Officer Training Corps (ROTC) program. There he received his degree in Global Security.

Prior to receiving his Global Security degree, he also briefly joined the U.S. Army Reserve as Lt. David Lemanowicz, becoming an American citizen.

Lemanowicz got his first entry in the Ice Hockey arena as a career back in 1995. Then, he was drafted overall in the 218th position to the National Hockey League by the Florida Panthers for the NHL Entry Draft. The following year in 1996, he played for Spokane Arena, for the very first time.

He performed pretty well with the team winning around 50 games and thus reached the Western Hockey league championship series.

The following season, David become a part of Florida’s farm club in the American Hockey League. Well, there he played for the full three pro seasons after which he quit and joined the University of Toronto. While at the university, he played for two seasons, also as a coach.

Later, in 2008, he quit Ice hockey as a player and signed as a goaltending coach with Rio Grande Valley Killer Bees.

The ice hockey star David and Jill married in April 2017. The wedding ceremony held at The Rose Hill Plantation in Nashville, North Carolina. While she is his second wife, they are leading a beautiful marriage as a couple. They were engaged in 2016.

The most interesting thing between the two is that they dated for quite a while years before they tied the knot.

As per the sources, they met back when Jill was just 17 years old in high school and David was 20 and a professional hockey player. However, after three dates, their love story had a sudden full stop as David moved out to a different location because of his professional commitments.

Jill, on the other hand, moved on with her studies and eventually pursued a career in TV, finding a space in Ashton Kutcher’s “Punk’d.”

They Met After Years In Afganistan

As fate had it David and Jill met again after 20 years in Afganisthan where David was deployed as a U.S Army in 2013. At the same time, Jill, who has gained fame as a co-host of “Wipeout” had traveled there for a “moral support” event for the troops.

Though they didn’t recognize each other initially, David soon remembered and approached Jill. Well, this time, they simply reportedly had a drink before with no romantic approach as David was already married to Gina.

As fate had it, David and Jill met again three years later in a restaurant in Los Angeles in 2016 where David was visiting her daughter.

Since David had already divorced his first wife Gina, things turned out differently between Jill and David. Their third and unexpected encounter blossomed into a romantic relationship. They dated for three months before Lemanowicz popped the question in July 2016.

As per People, Hallmark Star Jill Wagner faced fertility issues before she finally gave birth to a daughter with her husband David. But as she consulted a fertility doctor, she found out she was actually pregnant. Talking about the same, she stated,

My husband and I had been trying for a while and I finally stopped stressing over it and made an appointment with a fertility doctor,” she added. “We actually found out at the doctor’s appointment that I was already pregnant. It was shocking, scary and the best feeling in the world all at once!

They welcomed their first child together on Friday, April 17, 2020, at 12:36 p.m., amid the Covid 19 pandemic. Well, the couple gave their kid a patriotic name, Army Gray Lemanowicz, as she was conceived on July 4.

David Has a Daughter From Previous Relationship

Army is not the only daughter of David. Rather he is the father of one more daughter, Lija, from his previous marriage with Gina.

As of 2020, Lija is 10 years old and lives with her father and stepmom Wagner.

Prior to Jill, he was in a marital relationship with ex-wife Gina. They tied the knot back in 2005, but unfortunately, their relationship soon turned sour. The duo soon divorced, however, they have not revealed the exact reason behind their split.

Before separating, they lived together with their four dogs in Edinburg. They had reportedly met back in their college days in Toronto.

David’s now-wife Jill is a successful actress. Making her debut with an American hidden camera–practical joke reality television series Punk’d in2003, she has so far appeared in numerous movies and TV series.

Some of her successful TV works include Monk, Dr. Vegas, Blade: The Series, Inside the Vault, Teen Wolf, Mystery 101: An Education in Murder.

Similarly, her successful film roles are Junebug, Splinter, Road to Paloma, Braven, to name a few.

How Much Is David Lemanowicz’s Net Worth?

While sources claim that David has a net worth of $9 million, he has not confirmed the sum yet. However, he lives a decent life along with his spouse and children.

On the other hand, his wife Jill is pretty decent financially with over $4 million in net worth, as for Celebrity Net Worth.