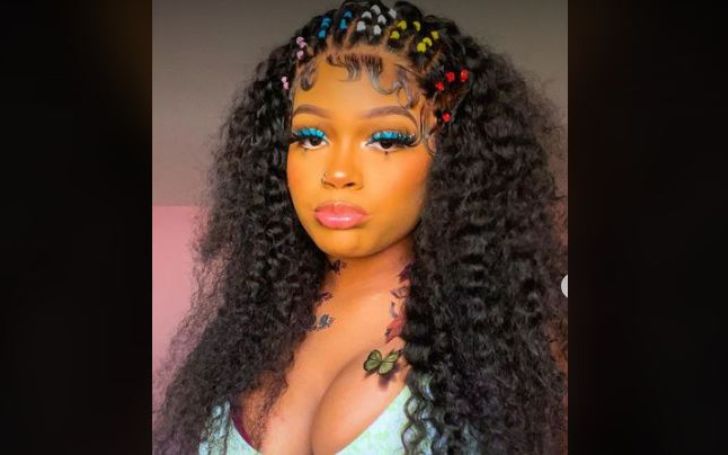 Emily Ears, real name, Emily Moore is a YouTuber and social media influencer. ‘Ears’ to some is famous as a hearing-impaired star who has gained close to 2million followers on her Instagram. Emily was previously also a member of the Adrian and Emily web group alongside her ex-boyfriend; they were in turn also members of the larger collective known as Loudegange.

Moore in addition is recognized for sharing her bold and curvaceous pictures on Instagram. She is also equally popular on Youtube; has a channel under her name in which she uploads a mixture of content like pranks, challenges, reactions, and music videos.

Below are full-on specifics shedding light on the aforesaid titles of hers. The narratives will also unravel the answers to who her boyfriend is, her pregnancy rumors, her hearing disability, and beyond.

The young adult Emily Ears was born on December 3, 2002. She is a native of Atlanta, Georgia.

Moore’s brother, Troy goes by his nickname Richboy Troy on IG, YouTube, and Tiktok. He has around 600k subscribers on YouTube, 800,000 plus followers on IG, and over 35k on TikTok.

Emily’s sister, Steph, on the other hand, has a little more than 200k Youtube subscribers, over 694k followers on IG, and more than 300k on Tiktok. Steph is also a mother to a son named Amir with her boyfriend who is also an influencer.

Where Does Emily Ears Live?

Emily who graduated from high school back in May 2021 currently resides in New Orleans alongside her family.

How Did Emily Become Famous?

Moore rose to prominence mostly because of her prank videos and skincare routines on her self-titled YouTube channel. She began her YouTube journey in September 2017 and so far has around 58 million views combined.

As of present, though, most of her videos are prank videos or day-to-day vlogs. The young YouTuber has over 700k subscribers on her YouTube channel, 36K plus followers on her TikTok, close to 2M on her main Instagram, and a little above 70,000 on her secondary IG handle.

Emily is also popular for her showcasing her relationships with fellow Youtubers the dates, fights, and even breakups. She has also performed some pranks on her boyfriends and has done hilarious stunts with them.

Ears was born with profound deafness in both ears although both of her parents have normal hearing. Her parents, Gregory and Beth, first thought their daughter might have a hearing loss when she was 9 months old.

They became aware of this when Emily did not respond to her name or to other sounds. They, however, found out she was indeed deaf when she was 1 year old.

Her Parents Were Devastated When They Knew About Emily’s Hearing

While Gregory and Beth found it devastating when they first learned their baby could not hear, they believe their faith in God helped them get through the early days.

Emily’s parents weren’t sure about using sign language with her when the first tests showed that their daughter had no hearing in one ear and some hearing in the other ear. They were afraid ‘sign language’ would confuse her.

Then when she was 15 months old, Emily again went through a hearing test using ABR and bone conduction. This time she apparently heard nothing in either ear.

These results left Gregory and Beth with no choice but to learn sign language. But they also wanted Ears to learn to speak if possible.

Emily Ears Had Difficulty Learning Sign Language; She Had To Go For Cochlear Implant

Emily’s parents weren’t happy using sign language with their daughter and she also wasn’t showing any speech progress. While they considered a cochlear implant, Gregory and Beth had a hard time deciding whether or not to put Emily through surgery.

They nonetheless decided to go ahead with it thinking it could help her for the rest of her life. Emily didn’t respond right away when she first had her implant which disappointed her parents as well. The first couple of weeks were hard with an implant for Ears but after 3 weeks she started hearing something.

After Getting Implants, Emily Slowly Started To Hear Things

Eight months after getting an implant with some work on hearing and speaking, Emily could hear down to 15 dB. Moore gradually seemed to understand everything that she heard. She in addition was talking a lot more than before. Several months later, Ears could hear down to a whisper.

Still, according to her mother, Beth, other people had trouble understanding Emily’s speech because she didn’t say consonants clearly. About a year after getting the cochlear implant, Emily apparently was a lot more comfortable speaking with hearing children than she had been in the past.

Emily Ears Didn’t Use Hearing Devices Until Her Late Teens

The YouTuber, Moore has openly addressed her hearing-impaired problem in her YouTube videos and IG posts. And although Ears had hearing problems since she was a child, she hadn’t decided to wear hearing aids until 2021.

She apparently avoided them due to extreme bullying. Ears has even shot and uploaded a video on a channel titled “Emily’s Fear Of Wearing Her Hearing Aids” where she talks about her struggles with wearing the aids.

Back in January 2021, the Instagram star with 1.8million followers, however, finally agreed to get her the aids as she was soon going to drive more often because of her college. Since then, she has been using the devices to help her hear clearer and better from her left ear.

Does Emily Have A Boyfriend?

The social media star, Ears is currently dating Kadin Oneekgg. Ears’ Instagram tells she and Oneekgg began dating on 18th July 2019 after Kadin asked her out in one of her YouTube videos.

Before they started their relationship, the couple had been friends for a while. Oneekgg and Ears officially announced their relationship via the latter’s Insta after she posted a video of Oneekgg bringing her a giant teddy bear, flowers, and gifts.

A month later, Kadin, too, through his Insta, shared a video of himself with Emily, Troy, and his then-girlfriend Khamyra thereby confirming their relationship. The couple has been appearing on one another’s socials frequently ever since.

Ears’ boyfriend, Kadin is also a recurring face in most of Emily’s YouTube videos. Oneekgg and Ears were also each other’s dates to their first-ever prom. Also a year later, the boyfriend accompanied his Youtuber girlfriend to her senior prom in New Orleans wearing matching outfits.

Emily Ears And Her Boyfriend’s Engagement

Ears and Oneekgg took their relationship a step further in December 2021 when they announced their engagement on Instagram. Emily posted three pictures and a video post with a caption saying

Two days later, the internet star uploaded a Youtube video with the title,

‘I Got Engaged and It’s My Birthday. ’

In the reel, one can see Kadin holding a huge diamond ring in one hand, getting on one knee, and asking the question to his social media star partner. Some believe it in actuality might not be a proposal as such Oneekgg put the ring on Ears’ right ring finger as opposed to her left. It is believed the ring was more of a promising gesture.

On 2nd April 2022, Emily dropped serious hints about her pregnancy when she posted a photo on her IG with the caption “3 months #cantwaittomeetyou.” Five days later, she posted a video on her YouTube entitled ‘I Might Really Be Pregnant’ which fueled her pregnancy rumor even further.

After seeing baby bumps-like pictures and video titles, all of her fans and followers took it that Ears was indeed pregnant with her first child. Later in the same video, Emily, however, clears out the speculation and says it is just a prank on her family, friends, and her followers.

During the first two minutes of her YouTube video, the prankster tells her views,

“I’m gonna prank everyone saying, I’m pregnant and I want a baby right now. It’s about to be crazy. My mom’s been speculating that I’m pregnant but I’m not,”

This was not the first time Ears did the pregnancy escapade. Back in March 2022, Emily had shared a picture holding a positive pregnancy test on her other IG handle @emilyears_19 with the caption “LINK IN BIO (found out if I’m pregnant or not).”

Emily’s Past Relationships Were Full Of Dramas

Before Kadin, Emily Ears was in a relationship with fellow social media star, Adrian Aka Big Nu previously known as AKA Smurftz. They had confirmed their relationship in 2018 having started dating sometime in the middle of that year.

Much like Emily, Big Nu also has hearing problems. The ex-couple when together had also made a joint Instagram handle @adrian._and_emily where they used to post their pictures and videos.

Ears and Big Nu though parted ways in 2019. Also, after ending his relationship with Emily, Adrian changed his name to Big Nu from AKA Smurftz, took the pronoun they/them, and currently identifies themselves as non-binary.

Emily’s former partner has over 400k followers on their IG @thebignu and a little less than 100k subscribers on their self-titled YouTube channel. According to their Q&A YouTube video, they are currently in a relationship with someone whose identity is yet to be revealed.

In the same video, when a fan questioned them if they miss being with Emily, Big Nu  responded saying,

“NO, I don’t. The fact that we started as best friends, later she started lying on my name and that I did this, I did that, that was never the case,”

“For y’ll to have friends like that in a real-world, stop being friends with them literally, it’s not worth it, specially when you have a platform too, it’s not worth,”

Their statements seemingly gave the vibe that whatever the reasons behind Big Nu and Ears’ breakup, they didn’t end their bearing on good terms.

After Big Nu, Emily dated a guy named Jay but that also lasted for a short period. In fact, Ears has also made several videos with her this boyfriend from recording their first date to confirming their breakup and its reasons on Insta’s lives and such.  The now 19 years old claims Jay cheated on her which her ex-boyfriend has denied.

Chloe Roma; Is she arrested? Who is her husband?