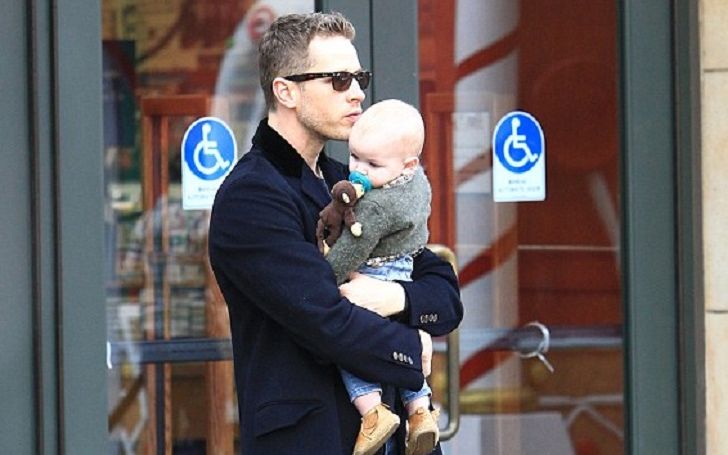 Hugo Wilson Dallas is the youngest son of one of the power couples Ginnifer Goodwin and her husband Josh Dallas. The star kid was born just two days after his older brother Oliver Finlay Dallas‘ second birthday. The little Dallas brothers are now enjoying their wonderful upbringing in their parents’ home in the San Fernando Valley.

In addition, talking about Hugo’s parents’ love life, Ginnifer and Josh are leading a happy relationship for a long time, also balancing their professional careers side by side. Let’s know how did the couple first come across?

Take a sneak peek at many interesting facts you didn’t know about Hugo!

How old is Hugo Wilson Dallas? Was Born in Los Angeles

Hugo is aged four as of 2021. He was born on 1st June 2016, in Los Angeles, California. His parents Josh and Ginnifer announced they were expecting their second child in November of 2015. A couple of weeks after the announcement, Goodwin was seen showing her growing baby bump while walking in Los Angeles.

Once Upon a Time actress told in an interview with Jimmy Kimmel Live, that her second pregnancy was comparatively easy than first,

“The first time we thought we needed to be heroes and do everything ourselves. We thought, ‘[Hiring help] is too L.A. for us, so we went real hippy-dippy. This time we’re going at it Downton Abbey-style—staffing up—like a nanny and an under-nanny.”

In addition, Ginnifer opened up to Romper that the couple worked out a lot while picking out a name for their second child. Because they have already used all of their favorite monikers for their firstborn-child Oliver. The two eventually settled out for Hugo.

Is the older brother of Oliver Finlay Dallas

Hugo has a brother named Oliver who was born on May 29, 2014, a month after his parent’s wedding. A representative for Josh and Ginnifer confirmed to People,

“This is their first child. Both mom and baby are doing great.”

The duo announced their pregnancy a month after their engagement in November 2013.

Although Hugo belongs to a family of actors, his actor father and mother have kept him and his older brother Oliver low-profile. The family of four has made a few sporadic public appearances to date. The first time, Hugo appeared publically was at six-month-old along with his parents and brother in Los Angeles in December 2016.

A year after in September, the growing family again made a rare appearance in Los Angeles. However, the two yet to share a single photo of their toddler sons on their social media handles.

What is Hugo Nationality?

His nationality is American. Talking about his ethnicity, Hugo is a Caucasian.

Details on His Parents’ Marriage

Josh Dallas and Ginnifer Goodwin exchanged their vows on 12th April 2014. Their intimate wedding ceremony was held in California, which was surrounded by their families and close friends.

Talking about their first meeting, the two first acquainted when they both were working on the hit drama TV series Once Upon a Time in 2011. They famously played Snow White and Prince Charming in the project. A source close to E! Online told the two first “got closer as friends”

“They were shooting in Canada together and because they were both away from home, they inevitably started to socialize together off the set as well as on—and they got closer as friends.”

In the meantime, Josh was still married to English actress Lara Pulver and Ginnifer was engaged to an actor Joey Kern. But, after Once Upon a Time co-stars’ growing romance started swirling on the internet, both of their relationships soon hit the rocks. Josh divorced from his wife Lara in 2011 while his then-future wife Goodwin called off her engagement Joey in May of the same year.

The duo remained secret for around a year. And they made their first red carpet appearance at the ‘My Valentine’ music video premiere party, in West Hollywood back in April 2012. After around a year into a relationship, Dallas proposed to his girlfriend in Los Angeles in October 2013. They got married in the following year and are still going strong.

Hugo Wilson Dallas Resides in Encino With His Family

The star kid now lives in Encino, California with his parents and brother. Ginnifer and her Josh bought the family-friendly residence for around $3.45 million in 2015. The 5,758-square-foot residence features 6 bedrooms and 4.5 bathrooms.