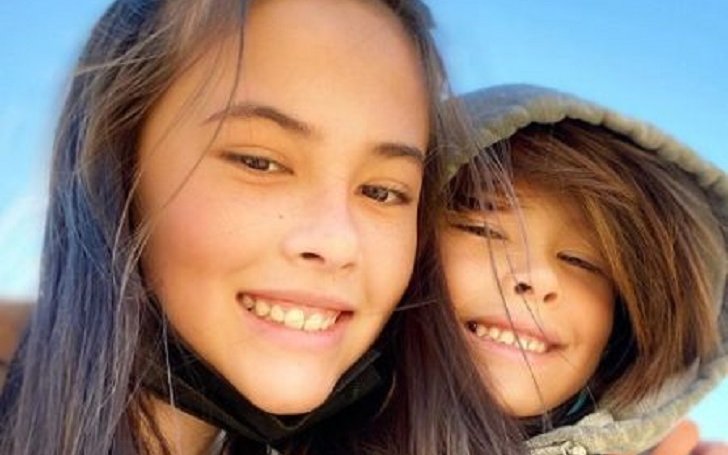 Hunter Lee Holloway is the son of one of Hollywood’s most successful actors Josh Holloway. Over the years, Hunter’s father Josh has been part of many mega-hit movies and TV shows. Most notably, Holloway played the role of a con man on the hit television show Lost. His impeccable performance on the science fiction drama Colony brought him huge fame.

Despite his father’s immense popularity, his mother is a little bit private person who prefers keeping things to herself. Besides, Hunter also has a sister.

Here are some unknown facts about Josh Holloway’s son. Let’s take a look!

What is Hunter Lee Holloway Age? His Date of Birth

Holloway is aged 8 as of 2021. He was born in Feb 2014, in Hawaii. At the time of his birth, his dad Holloway said E! News about getting a decent amount of sleep even having two children in the house.

Talking about their pregnancy, Holloway disclosed that the couple was expecting their second child in an interview with Entertainment Tonight when the actor was asked what it’s like to be a TV sex symbol,

“That’s funny because I’m a family man,” Josh told, “I’ve got a four-and-a-half-year-old daughter and another one on the way. Pretty excited about that.”

Hunter Has an Older Sister

The 8-year-old boy has a sister, named Java Kumala Holloway, born on 9th April 2009, in Oahu, Hawaii. His parents disclosed their first pregnancy back in December 2008.

Both Holloway siblings are active on Instagram but have kept their profiles private.

It can be an uphill task for everyone to balance their family and professional life hand in hand, especially when you are a Hollywood heartthrob like Josh Holloway. When the interviewer asked what the star of the sci-fi drama Colony thinks his sexiest quality is. He told Women’s Health,

“God, none – I’m so goofy! I’m a really good dad. Is that sexy? I’m completely in love with my children and I participate in their lives on every level.”

Josh, who loves to spend most of his time with his kids told that the whole family sleeps in the same room.

“At home, we all sleep in the same room, so I wake up thinking about how beautiful my children are, lying there sleeping.”

The actor has also posted a number of adorable photos of his kids on his social media handles.

Who is His Mother?

Hunter’s mother Yessica Kumala, born in 1978 used to work at a bar in Los Angeles. Kumala is originally from Indonesia and later moved to the United States. Furthermore, Hunter’s maternal grandparents were Chinese.

Yessica and Josh first came across when Kumala was at a Los Angeles bar back in the late 1990s. After a few years into the relationship, the couple got engaged. Josh proposed to his then-girlfriend soon after shooting the pilot of Lost in Hawaii.

As for their marriage, the duo tied the knot back in October 2004, in a low-key wedding ceremony. They have been together ever since and their relationship is still growing strong every day.

Where Does Hunter Lee Holloway Live?

Hunter now lives in his father’s house located on the island of Oahu. The family of four initially lived in their Honolulu home. But, his actor father sold it for $1.2 million back in 2018. The single-story house boasts three bedrooms and two bathrooms with about 1,500 square feet of living space.

According to Los Angles Times, Josh acquired the mansion for $774,000.

As Hunter is still a kid, the figure of his net worth is not possible to guesstimate. But, while talking about his father’s wealth, Josh has an estimated net worth of $22 million. His major source of income is his acting career and a few other works like modeling and producing.