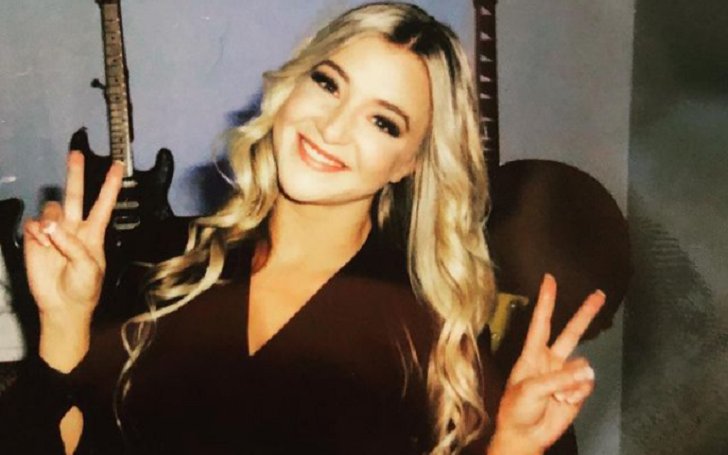 Jesse Money (aka Jessica Mahoney) is a famed celebrity kid who is the daughter of Eddie Money, a late singer and songwriter. Her dad who was active in the music industry from 1974-2019 also got a Grammy Award nomination for Best Male Rock Vocal Performance for “Take Me Home Tonight.”

Like many celebrity kids, Eddie’s daughter Jesse has also followed the same career path as her late father. The father and daughter duo, who were super close to each other had lots of tours together as well. In addition to music, Jesse is a successful actress. She has worked in a number of movies and TV shows. Especially, her portrayal in the TV series The Top Ten Revealed brought her huge fame.

Although her professional life is quite open, Jesse remains too secretive when it comes to her love life. Several of her fans have questioned if Jesse Money is married. If yes, who is her husband? Well, here are several unknown facts about Eddi Money’s rock star daughter!

When was Jesse Money Born? Her Childhood and Education

Besides, as far as her nationality is concerned, Jesse is an American. She is of mixed ethnical background as her late dad was of three-quarters Irish descent and the rest from Germany and Poland.

Jesse is the daughter of Eddie Money and his wife Laurie Dee Harris. Her parents married in the late 1980s. The former duo was in a delightful marital relationship until Eddie’s death in Sept 2019. Her late dad was 70 years old at the time of his demise.

The late legendary musician died of stage 4 esophageal cancer. He announced his cancer in late August and died 19 days after the announcement in a Los Angeles hospital on September 13.

Her late father was previously married to Margo Lee Walker.

Jesse’s Relationship With Her Late Father and Mother

The actress had a close relationship with her late dad whom Jesse used to describe as her best friend as well. If you once visit Jesse’s Instagram profile which is flooded with family photos, you will definitely know the bonding the father-and-daughter had shared.

A year after her father’s passing, Jesse shared a series of throwback photos with Eddie on Father’s Day with a lengthy Instagram caption,

“Happy Fathers Day to my Daddy in Heaven! I miss him tremendously. Today has been really hard. I know a lot of people are dealing with the same emotions today, but I guess it’s the new normal for me. I know how blessed I am to have had such an amazing Dad.”

Besides, they also performed on numerous stages together. Jesse mostly used to perform as a backup vocalist on several of her dad’s tours. Additionally, back in 2008, they appeared together on Fox’s ‘Don’t Forget the Lyrics’ to collect money for charity works.  aa

Money Grew Up with Her Four Siblings

Money has four brothers: Joseph, Julian, Desmond, and Zachary Money. Her brother Julian is an actor, who rose to stardom following his appearance on Eddie Money: The Real Money Concert and Real Money.

All of them share a strong bond with each other. Back in April 2018, on the occasion of Sibling’s Day, Jesse shared an adorable family photo with her brother & parents. Her caption read,

“Happy siblings day! Im blessed to have such a wonderful family. Never a dull moment. Check out the next episode of Real Money on axstv.”

It is pretty evident that Jesse shares a great relationship with all her siblings.

What is Jesse Money Doing Now? Her Acting and Music Career

As we said earlier, Jesse Money is an actress, who has worked in dozens of movies and TV shows. She began her journey in the entertainment world with an appearance in the MTV singing competition series Rock the Cradle in 2008. The same year, the then-budding actress worked on Don’t Forget the Lyrics!

However, later on, Jesse took a prolonged hiatus from acting, segueing into the music world. She subsequently started touring with her late father and performed together with him several times.

A decade after her break from acting, Money made her acting come back, playing in the TV series Real Money (2018-19). Her other TV credits are Eddie Money Tribute Concert, The Top Ten Revealed, and Rock & Roll Road Trip with Sammy Hagar.

In addition to music and acting, Money enjoys guitar and piano. She can also play tambourine, cowbell, and maracas.

Money Paid a Tribute to Her Father With a Christmas Song

In December 2022, Eddie Money’s daughter Jesse reworked one of her dad’s songs, ‘Everybody Loves Christmas: A Song For Dad’ to pay a tribute to her late dad. Jesse worked on the song with her brother named Dez.

Talking about the song on her Instagram, the star kid said her future tune,

“It was hard for me to write some of the lyrics but I wanted to sing something special to honor him.”

What is Jesse Money’s Net Worth?

Money has an estimated net worth of $1 million in 2022. She has earned the majority of her wealth from her singing career. Besides, as for her late dad’s wealth, Eddie had a net worth of $20 million at the time of his death. The Grammy Award nominee singer, who had spent over four and a half decades released a number of major hit albums & singles.

Is Jesse Money Married? All About Her Love Life

Money has remained quite confidential when it comes to her love life. She has never revealed anything about her dating life. Because of her tendency of keeping things quite private, we are yet to find out whether Jesse is married or not. That said, if sources are to be believed, she is most probably not married at present.

Additionally, neither of any online tabloids has yet confirmed if Jesse has a boyfriend or lives a single life. Well, as of now, it is safe to say Money leads a happy single life in California.

Where Does Jesse Live? Her Social Media

She currently resides in California, the United States of America. As for her social media activeness, the star kid has over 15k followers on her Instagram. She is also active on Twitter.