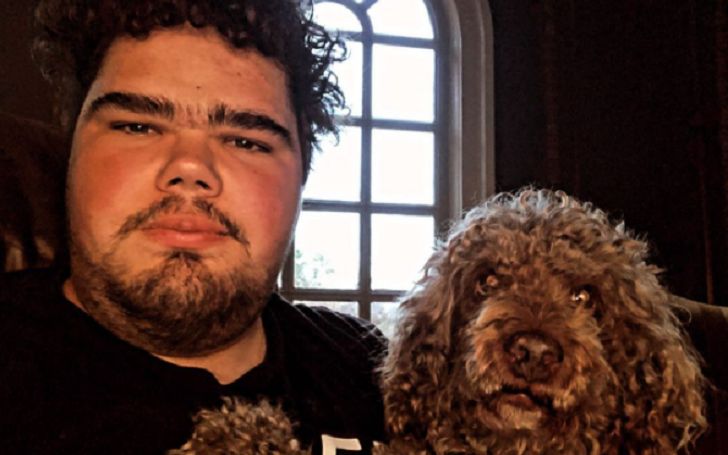 Jordan Edward Rogers is the twin son of one of the legendary late artists Kenny Rogers and his fifth wife Wanda Miller. His parents were still married until his father died at age 81. The singer and songwriter, who was corporated into the Country Music Hall of Fame in 2013, was well-versed in various genres like jazz, pop, folk, rock, and country.

In addition, Kenny was a devoted family member as well as a doting father of five children from his four different marriages. But, Rogers’ connection with his twin boys was more especial who even stopped touring to spend more time with his family as a semi-retired artist.

Besides, Jordan, an animatronics lover also has the same passion for photography alike his father. Let’s explore more about the famed star kid’s life!

How old are Kenny Rogers Twins? Their mother stopped going out since Her Sons came along

Jordan and his twin brother Justin Charles Rogers are aged 16 as of March 2021. They were born on July 6, 2004, in Atlanta, Georgia. Jordan weighed 5 pounds, 8 ounces, and Justin weighed 6 pounds, 10 ounces at the time of their birth. Interestingly, their mother Wanda herself also has an identical twin sister. In March of the year, it was announced that Rogers was expecting his twins.

Besides, being the wife of one of the most successful crossover artists of all time Miller used to go everywhere with her now-late husband but since giving birth to kids her first priority became the family and children. She told Valdosta Daily Times,

“The first 12 years we were together, I went everywhere with him. Then when the kids came along, you have to prioritize.”

Jordan was raised in his hometown of Atlanta with his twin brother. Besides, talking about his nationality, the celebrity kid is an American and belongs to the Caucasian ethnicity.

Rogers has three half-siblings; Carole Lynne, Kenny Rogers Jr., and Christopher Cody Rogers from his father’s three different marital relationships. Kenny first tied the knot with Janice Gordon in 1958 and the former flames divorced in 1960 with one child, Carole.

For the second time, the artist went on to marry Jean, however, their short-lived marriage also ended in 1963. He then married for the third time Margo Anderson in October 1964. They had a child Kenny Rogers Jr. before they went their separate ways in 1976.

Marianne Gordon, an actress was Rogers’ fourth wife. The exes exchanged their vows in 1977. Nevertheless, like Kenny’s previous three failed marriages, it also dissolved in divorce but with one child Christopher Cody Rogers.

Rogers, who was already a father of three kids before marrying Miller wasn’t apparently ready to have kids with his new wife. But, on the other hand, Wanda who turned out to be his fifth wife had never had kids. Later, in agreement with Miller’s desire to embrace motherhood, Rogers went on to do some soul-searching and eventually realized not agreeing to have kids would be unfair to his spouse.

In an interview with Independent, the artist said,

“I also didn’t want her to wake up at 50 and me be dead and for her to have to say, ‘I wish I hadn’t married Kenny, I could have had kids.’ So we went for it, and when I was told it was twins, man, I was thrilled. So was Wanda. It wasn’t just ‘We are going to have a baby’ it was totally overwhelming.”

Besides, in the same interview, Kenny said it broke his heart when he realized that he might not be able to see his twin sons go to college. He said,

“Someone will be talking about his or her child going to college and it breaks my heart…  I knew I wouldn’t be there at the prime of their lives.”

Kenny Avoided Musical Tours To be a Full-time Father

Back in 2016, the greatest musician decided to stop to go on a musical tour in order to spend more time with his boys and wife Wanda.

I hope my fans understand that I’m a father first and a singer second… I’m missing some very great parts of my boys’ lives. I know as well as anybody else how that time gets away from you. And I don’t want to miss it. I just worry about how much longer I’m going to be here, and I want to have time to spend with them. It’s pretty simple.”

It looks like, one of the most rewarding things in his life was the fatherhood experience.

Diving into the love story of Kenny Rogers and Wanda Miller, it came to know that the duo first came across when Miller used to work as a hostess at Pricci Restaurant in Atlanta, Georgia. The former couple was in a relationship for five years before they walked down the aisle on June 1, 1997. Their renowned anniversary took place at his ranch near Athens, Georgia.

They were still in a marital relationship until Kenny’s death on March 20, 2020. He died from natural causes at his home located in Sandy Springs, Georgia.

Like his late dad, Jordan is also a passionate photographer. His interest in photography emerged when Rogers used to visit various places around the world with his father. He is now taking it up more seriously and has also created his own Instagram account to share his pictures.

In addition, Keeny Rogers’ twin son loves animatronics. He is also a dog lover who owns a puppy named Bouncey. On the other hand, his twin brother Justin is a big fan of the banana splits movies.

Where Does Jordan Rogers Live? Details on His Net Worth

He resides in Georgia with his mom and brother. Jordan previously lived at his father’s 13,000 square-foot home in the northern suburbs of Atlanta. Kenny bought the mansion back in 2012 for $1.5 million and listed it on the market for sale for $4.8 million. But, the house eventually sold for around $2.383 million in 2018. It has six bedrooms and 10 fireplaces.

Besides, talking about Jordan’s net worth, it is still under review. In the meantime, his late father Rogers’ had $250 million of net worth at the time of death.

Who Is Kyle Shanahan Wife? His Married Life & Relationship in Detail

Who Is Chase Severino? Also Know His Relationship With Whitney Thore