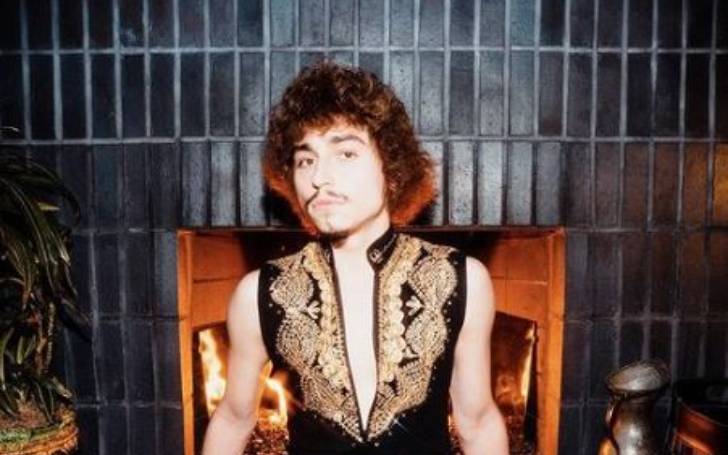 Josh Kiszka, 26, is an American singer and vocalist for the hard rock band Greta Van Fleet. He formed the band in 2012 alongside his two siblings Jake on guitar, Sam on bass guitar, and Kyle Hauck on drums.

Kiszka and the band were first noted after they released the single Highway Tune. After that, they went on to release their EP Black Smoke Rising in March 2017. So far, they have released two studio albums winning a Grammy for Best Rock Album.

Recently in 2022, Josh made it to the headline after culturally appropriating Indigenous culture for which he openly apologized. Today, let’s talk about Josh’s early life, childhood, net worth, girlfriend, & much more.

Josh Kiszka Grew Up In A Musical Family

The singer-songwriter Joshua Kiszka was born on 23rd April 1996 in Michigan under the birth sign Taurus. He was born to Papa Kiszka and Karen Kiszka who both come from a musical background.

Not to forget, Papa Kiszka is also a vocalist for the band, Blues and he often performs around the area alongside his band members.

Besides this, Josh has three siblings, Jake Kiszka, Sam Kiszka, and Veronica Kiszka. Just for a fact, Josh and Jake are fraternal twins.

The 26 years old went and graduated from Frankenmuth High School which is located at 525 East Genesee Street, Frankenmuth MI.

In 2012, Josh, his twin brother Jake, his younger brother Sam, and Kyle Hauck decided to form a band called Greta Van Fleet. The four decided to call their group Greta Van Fleet after Kyle mentioned the name ‘Gretna Van Fleet’. The real-life Gretna is a woman in her 80s who later gave her blessing to modify and use her name.

Although Gretna is not a huge fan of rock music, she still supports them and even went to one of their shows at a local venue called Fischer Hall. Sadly, Danny Wagner replaced Kyle after she left the band in 2013.

With just one song credit, the band went on to win the Best New Artist at the Loudwire Music Awards in October. They were also named the new artist of the week by Apple Music the same year.

The band released their debut studio album Anthem of the Peaceful Army on 19th October 2018 and sold around 80,000 copies during the first week. The album reached no.3 on the Billboard 200 and was nominated for four Grammy Awards winning the Best Rock Album for their second EP From the Fires.

Moreover, their second album The Battle at Garden’s Gate came out on 16th April 2021. The album consists of singles including My Way Soon, Age of Machine,  Heat Above, and Built By Nations.

Josh Kiszka & The Band Postponed Their Show Due To Health Issues

At the start of 2022, Greta Van Fleet started their Dreams in Gold North America tour touring different places in Europe. However, the crew had to postpone their tour mid-way after Jake Kiszka was admitted to the hospital.

Although both of the twin brothers, Josh and Jake were reported sick, Jake was taken to the hospital after he got diagnosed with pneumonia.

The news was announced on the band’s Instagram page @gretavanfleet with over 1.1 million followers. The band also revealed that Jake wanted the show to go on saying,

“Jake wanted to push through, however doctors have advised doing so could potentially lead to further complications and a longer recovery.”

They concluded by saying,

“This is the only beginning of the tour and it is important for Jake to heal so the rest of Dreams in Gold 2022 can continue as planned through the rest of the year starting in South America.”

The band continued their tour after Jake was discharged from the hospital and recovered fully.

Kiszka Is Also Into Charity Works Along With His Band

With their growing name and fame among rock music fans, the band continues to grow every day and try to connect with its fans. Although the band reached the heights of success in a very short span of time, they are still very down to earth and try to give back to the community as much as they can.

Back in 2018, the band donated a certain percentage of each ticket from their concert in Detroit to the CHM Foundation. It is a charitable organization that aims and supports the advancement of children’s health and wellness.

Similarly, the band also showed their support for James Rhodes Don’t Stop the Music campaign which aims to improve music education and provide children with a chance to play music with their favorite bands.

Despite their young age and blooming career, Greta Van Fleet is setting a good example for the upcoming generations.

Josh Was Slammed For Culturally Apparoating The Indigenous People

In April 2022, people on the internet slammed Josh after he wore Indigenous costumes on stage. He was called out for wearing feather headdresses and garments belonging to Indigenous communities frequently on his shows.

Likewise, another factor was his posts from 2017 in which he is alongside his friends who were wearing copies of sacred Indigenous wear.

One even created an IG account solely to challenge the singer over these issues. The account continued to grab the public attention by saying,

“These photos have never been addressed or deleted despite being culturally appropriative and offensive to various Native cultures. Indigenous fans and others have tried to contact Josh asking him to address the matter but he continues to stay silent.”

“Remaining silent on this is upsetting & ignorant as it upholds racist ideologies that Indigenous cultures are simple a costume,”

“To our Indigenous fans, I see you, I’ve taken time to listen and gather my thoughts. My appreciation for Indigenous culture is bigger than myself. As I’ve come into adulthood, I’ve been able to grow and learn. This growth has not stopped and will not stop here.”

“The Chippewa tribe has had a particularly profound impact on my life from my early years growing up in Michigan. I have made a charitable donation [to] the First Nations Development Institute to help keep Indigenous traditions like theirs alive and well. Should you want to support with me, please visit firstnations.org.”

Is Josh Kiszka Gay? Does He Have A Girlfriend?

With a successful career at just 26, it is of no surprise that a male artist forms a huge female fan following. And something similar is going on with Josh Kiszka, Greta Van Fleet’s vocalist.

Though the singer-songwriter has not openly called out or introduced someone as his girlfriend, we can see numerous females calling him their boyfriend. Some even keep  “Josh Kiszka’s girlfriend (real!)).” on their social media handle bio.

While he stays mum about his love life, people even started speculating that he was gay. The absurd speculation is not addressed by Josh or any of his representatives so far.

What Is Josh Kiszka’s Current Net Worth?

Looking at the rising star’s rapidly growing career, we can say that he obviously has a very bright future ahead of him.

As of now, his current net worth is around $5 million. The 26 years old singer began his professional career in 2012 alongside his brothers. Similarly, he also has a self-titled Youtube channel with over 4.47k subscribers.

Who Is Lauryn McClain? Her Personal And Professional Life