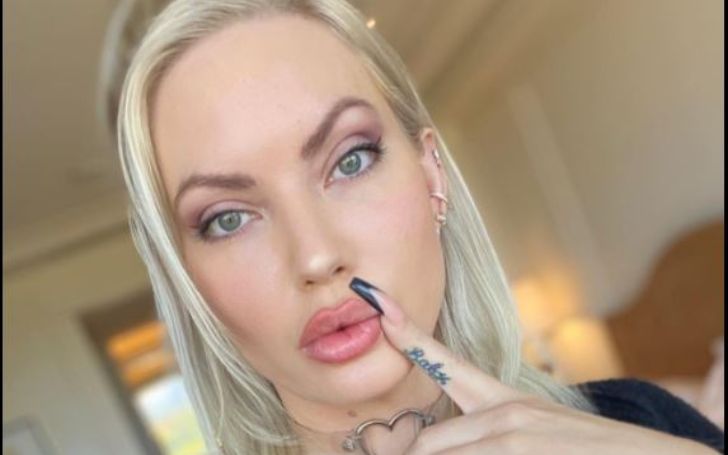 Kayleigh Swenson who also goes by the nickname, Viking Barbie is a Recording Artist Fitness, model, and musician as well as a songwriter. She is also the daughter of the late Jeep Swenson, an internationally known bodybuilder and former professional wrestler known as “Jeep the Mercenary.”

Kayleigh’s father was also an actor; people mostly know him for his portrayal of Bane in the 1997 film, Batman & Robin. His additional feature credits include No Holds Barred, The Big Brawl, and Bulletproof.

As for Kayleigh, she is Jeep’s daughter with his wife, Erin Patricia {née Hillsman}. The 5′ 10″ tall Kayleigh considers herself a big-time fitness buff.  Add to that, she is the two-time Playboy cover model. What’s more, the tall, statuesque, glamorous yet tough model is also equally popular over social media with over 2 million Instagram followers.

Get a load of the origin of the Texan beauty who is no stranger to showing off her amazing body on the internet. Know a bit more about her formative years, her parents, the extended details behind her father’s death, and also whether she has a boyfriend or not.

Who Is Kayleigh Swenson?

While she is currently the resident of Fountain Valley, California, Swenson says she will “always be a Texas girl at heart.” Ethnicity-wise, she allegedly has Scandinavian roots.

Her mother, Erin Hillsman is a former exotic dancer and model. Swenson says growing up and being around her parents’ lifestyle, she had to grow up really fast. She additionally admits seeing her parents achieve their goals in so many different fields broadened her horizons as well.

Viking Barbie once stated her parents were a big part of her drive and work ethic. In an interview, Swenson revealed she sometimes thinks she has a God complex that came from her late father.

Kayleigh Swenson Is An Artist As Well

In addition to being an addiction survivor, activist, a model, Swenson has also been focusing on her music career, with an EP and releases, Kéta, Tech N9ne, and Crooked I.

To say more about her musical career, in June 2019, the Bad Pack star’s daughter collaborated with friend and songwriter, Kéta Kuns, as they worked with producer Chase-Green, for singles “Basic” and “Lies.”

During the same time, she was also about to release Crooked I (“My Heart Belongs To Daddy”) and Tech N9ne (“All The Way To The Bank”). The same year, she had likewise dropped “Blow Ya Mind (Succubus),” which is her testament to female sexual empowerment.

Fellow wrestler, Hulk Hogan, and actor James Caan delivered eulogies. The alleged reason behind Kayleigh’s father’s death was his years of steroid abuse. He apparently used to inject, drink and eat steroids and even rub them into his drug-ravaged body.

The daughter of the San Antonio-born actor admits to going through the addiction thing and having to kick heroin and being in a jail cell, naked, cold on the floor.

Swenson though in an interview said she got a certain amount of something out of that. In the same sitting, the blonde Instagram model also talked about how she always had had craziness and mental illness stuff within herself.

She, however, has always preferred to embrace them but with inner power. Kayleigh says she’s always had it because she thinks she’s had to have it. Swenson admits to meeting people who exclusively tried to sell sexuality. She though says she didn’t let them talk into it.

For the Texan-born beauty, achieving self-acceptance and self-love didn’t come without hard work. As of recent, Viking Barbie has been sober for more than eight years.

Swenson gives credit to her ego in helping her guide her journey to sobriety. Now far from her past criminal lifestyle, she feels she is unapologetically unconcerned when it comes to not letting anyone stand in her way.

Kayleigh is also in the endeavors of helping others on their sobriety journey and additionally owns a recovery home in Huntington Beach called the Viking House, for transitional living for men.

“I really love to be able to give back and help people in their sobriety because it was so freely given to me. I basically just came from nothing, ended up running away from home and living on the streets. I’ve been locked up and I’ve had a very long drug addiction. To be able to help people in a similar situation is really rewarding,”

said the songwriter to Ink Maged in June 2019. Swenson feels she has enough to help those struggling with addiction, from her own experience in rehab.

She also shared how after she went to rehab, people were coming in off the street that was homeless, toothless; they were peeling their clothes off because they urinated on themselves. Kayleigh believes the people that the society thought were throwaways become or have become pillars in the community and the sponsors of the other people.

The one who still likes to call herself All American Dirtbag likewise disagrees with the general belief that those with addictions in their lives are too far gone or that person will never get sober.

While in the rehab, Kayleigh apparently was the worst they had but she changed everything, from the people she was around, to a lot of her beliefs and thoughts. During the recovery, she focused on her goal, channeled her addiction into positive things, like creating music and work, as well as just “going forward.”

What Mental Issues Did Swenson Suffer From?

She further said she is everything; the 36-year-old admitted to having the ability to go from egomaniac with the mental illness stuff to a very affectionate loving side. She once even took inspiration from this time of hers, did a lot of writing in rehab.

Kayleigh wanted all aspects of her music to creatively reflect the duality that came with this diagnosis. She eventually channeled all that into her EP, Borderline.

Besides her music, Kayleigh’s skin also serves as a canvas that illustrates the duality that centers her. Both sleeves from the tattoo artist, Sergio Sanchez, represent the Seven Deadly Sins.

She once herself, revealed her inner right forearm is wrath, the outer is vanity; the inner upper arm is gluttony, and the other outer is lust.

Explaining her inks further, Viking Barbie said while she doesn’t agree with the hard-written Christian rules, she just loves great Epics. She says her tattoos for her are also a reminder of her issues with excess and obsession.

Does Kayleigh Have A Boyfriend?

In April 2016, Swenson took to her YouTube channel to reveal her separation from her then-fiancé. The Texan-born model though didn’t mention who he really was. She, however, said they were splitting up because of his relapse and his addiction problems. In another video, she also disclosed so far she had had three major relationships her whole life.

Two years later, Swenson introduced her Facebook fans to a new man in July 2018. What then appeared to be a casual picture turned out to have a story.

While Kayleigh didn’t say right away who the bald guy with the sunglasses really was, the comments on hers and his picture pretty much gave away that he was indeed Swenson’s partner. It wasn’t until October 2018 that the inked beauty went on to Facebook to confirm her love for the aforesaid man.

Though it has never come to light how long Swenson and this guy who goes by the name Aaron Andrew have been dating. Also unanswered is whether the couple has decided to get married or not.

Swenson’s this apparent boyfriend also has a daughter of his own from his previous relationship.