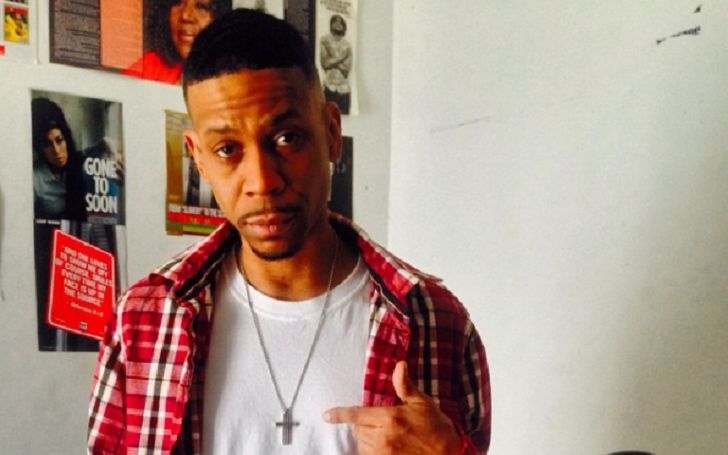 Kecalf Cunningham is the youngest son of Aretha Franklin, one of the most influential artists of the 1960s. Widely known as the “Queen of Soul,” Aretha released a number of evergreen albums and had also won numerous accolades including 18 Grammy Awards. Sadly, the soulful singer died of pancreatic cancer at 76 in Detroit, Michigan.

Being the son of such an adorable singer, Kecalf has also followed the same career path as her late mom. The acclaimed Christian rapper has already shared the stage with his mother several times. One of the memorable performances the mother-son duo did was at the Radio City Music Hall in 2008.

Who is Kecalf Cunningham’s Father? His Parents Relationship

His father was Ken Cunningham (aka Ken E. Cunningham), the one-time Kecalf’s road manager. Moving towards their love story, the ex-duo was in a relationship between 1968 and 1976. Despite their long association, the two never married.

After their split, Franklin went on to marry Glynn Turman in 1978. The two, nevertheless, divorced after six-year of their marriage in 1984.

His mother Franklin, a highly successful singer having sold over 75 million records worldwide died on 16th August 2018. She was 76 at the time. Talking about the cause of death, it was Franklin’s prolonged pancreatic cancer. A number of world’s recognized people like former U.S. President Barack Obama and civil rights activist and minister Al Sharpton paid tribute to the late iconic singer. Her memorial service took place at New Bethel Baptist Church on 19th August.

Needless to mention, all of Franklin’s family members were saddened by the demise of the iconic musician. Most of them took their social media to pay a tribute to their old guardian. The same day, the legendary artist passed away, her granddaughter Victorie Franklin shared her sadness on Twitter with an emotional message,

“I have many memories of me coming into her home and she would be playing the piano and singing. Words can’t describe the pain I’m feeling, but God is telling me that she is at peace. Today we lost an icon, a legend, but today I lost my grandma. I love u and imma make u proud ?”

Similarly, Kecalf has shared numerous photos of his late mother.

What is Kecalf Cunningham Age?

His age is 51 as of 2021. He was born on March 28, 1970, in the United States of America. His nationality is American and belongs to the Afro-American ethnicity.

Has Three Half-Brothers: First Was Born When Franklin Was 12

Furthermore, Kecalf has a half-brother Ted White Jr. from his mother’s relationship with her then-husband Theodore “Ted” White.

Kecalf Cunningham is a Singer: Details on His Professional Journey

Cunningham is a Christian rapper who performed numerous times along with his late mother on stage. Back in March 2008, the mother-and-son went on to appear at Radio City Music Hall. At the time, The New York Times wrote,

“Kecalf Cunningham, a Christian rapper, who came with a backpack, a hoodie and some cheap-sounding recorded tracks. After what felt like ages, it was a relief to have Ms. Franklin return, energies renewed, to belt out “Chain of Fools.”

Moreover, in 2017, Cunningham appeared along with his mom at Aretha Franklin Way, the street renamed in Franklin’s honor.

Back in 1995, in an interview with The Katz Tapes, the soul singer opened up about her youngest son’s love for music. She said “Kecalf is a hip-hopper and a rapper.” She added,

“And my other son, Teddy, plays guitar. He plays in my band and he’s been doing some things lately with some musicians over in London. He sings, too, and he’s looking for his own record deal.”

Besides, some media outlets also considered Cunningham as “Shaquille O’Neal” of Christian rap.” He frequently retells the stories of the bible via the lyrics. As per Vulture, the rapper has also been, “allotted rap resources for reasons other than rap aptitude.”

Despite his immense professional success, Kecalf still tries to keep things to himself. So, most of his professional details still remain out of the media.

Who is Kecalf Cunningham Wife?

As per online tabloids, the rapper has been in a blissful married life with his wife Kafi Franklin. However, the duo has remained tight-lipped about their married life. They have even yet to make a single public appearance together.

Besides, talking about Kecalf’s spouse Kafi is now self-employed. She studied business and accounting at Baker College.

He Has Three Children

Cunningham is also the proud father of two grown children. They have two daughters Victorie and Grace Franklin. Both of the Franklin sisters attended Bloomfield Hills High School, where Victorie also played basketball. She now studies at Howard University.

Furthermore, their son Jordan (better known as Jonah) was born in October 1994.

Like his musical interest, all of his children have also followed the same career path. Kecalf’s older daughter Victorie is a pianist and a singer. She often posts her singing videos on her social media handles. The young girl also worked as a background vocalist with her late grandmother.

Similarly, Cunningham’s two other children are also pretty into music. Have look at the Instagram video, where Cunningham and his younger daughter Grace are performing music and beatbox,

His net worth is $2 million as of 2021. He mostly makes money from his music career. Besides, Cunningham’s later mother had an estimated fortune of $80 million at the time of her demise.

Was Once Arrested For DUI

A couple of weeks after the death of the soul icon, Kecalf Cunningham was arrested for drinking and driving. After the incident which was happened on 27th October 2018, Kecalf appeared in court and was then given a sentence of over 93 days in prison.

On the other hand, the Franklin family has been facing some legal troubles since the Internal Revenue Service claims that Aretha owes over $6.3 million in back taxes.