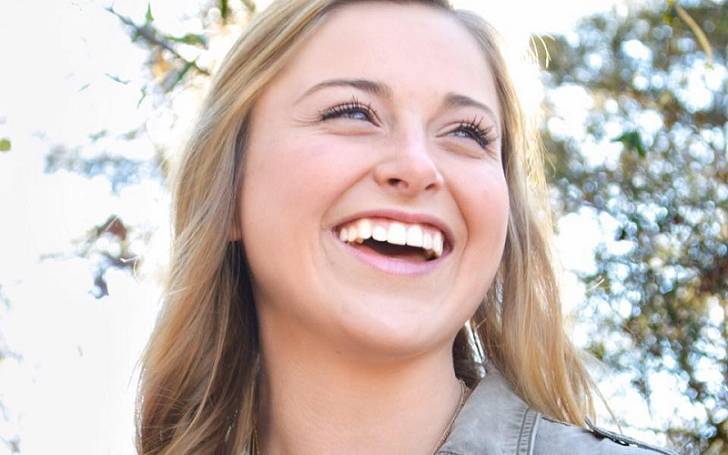 Madison Oberg (aka Madison Wentz) is the wife of Carson Wentz, the former lead quarterback of the Philadelphia Eagles. Oberg has been married to her husband Wentz for over three years now. The two tied the knot in 2018 and are leading a happy relationship ever since. Besides, the duo also shares two daughters.

In addition, Madison and her husband Carson have shared the same love for humanitarianism. They are ardent supporters of Mission of Hope: Haiti, where Carson Wentz’s wife did an internship.

Let’s find out everything about Madison!

Madison Oberg was Born and Brought in Kentucky

Madison “Maddie” Oberg was born on 21st June 1997, in Lexington, Kentucky, the United States. She is the daughter of Brian Oberg (father) and Lisa Broughton (mother). She grew up in her hometown of Kentucky along with her two sisters named Lauren Oberg and Alexis Oberg.

As far as her ethnicity is concerned, Madison is Caucasian and she is an American by nationality.

Oberg went to Ozark Christian University. She then went on to enroll at the Missouri Southern State University to study elementary education.

What does Carson Wentz Wife Madison Oberg do?

According to Oberg’s Facebook profile, the popular celebrity spouse did an internship at Mission of Hope: Haiti, a nonprofit organization based in Cedar Park, Texas. The organization that follows Jesus Christ motives to bring life transformation to everyone.

In the meantime, Madison’s husband Wentz also supports the charity organization. He along with his former teammate, Jordan Matthews traveled to Haiti in May 2017. Months later, the football quarterback told ESPN regarding his decision to go to Haiti,

“I believe in Mission of Hope’s initiative completely, and I feel that this sports complex will be an incredible way for the youth of Haiti to have more opportunities to enjoy sporting competition, to further their education, to have access to healthy meals, and to enjoy being around a Christian community to help further their faith.”

Madison Oberg Relationship with Carson Wentz – When Did They Start Dating?

The couple began dating a few after Carson’s break up from his high school sweetheart, Melissa Ulrich in 2017. Wentz shared his first photo with his now-wife Maddie just after his knee surgery in December 2017. He captioned the image taken from his hospital bed,

“Surgery [check]. The comeback officially begins now! The Lord truly blessed me with this beautiful young lady to walk by my side and support me through all of this.”

Besides, Oberg also appeared in a photo Carson shared back in November on the occasion of Thanksgiving.

They Reportedly Met in Haiti

Although neither Madison nor her husband Carson has revealed how the duo first came across, many sources reported they were on a mission trip to Haiti in 2017, probably the place the duo met each other. But, it never came to know whether the duo went together or they met there coincidentally.

Carson couldn’t play in Super Bowl LII because of his injury but when his team Philadelphia Eagles won the Super Bowl Championship, the quarterback proposed to his girlfriend. He announced the big news with a collage of engagement photos on Twitter on 6th February 2018. He wrote,

“She said YES! And now Maddie and I both got us a ring can’t wait to marry my best friend! God is doing some amazing things and I can’t thank him enough!”

Many of their fans congratulated the then newly-engaged couple in the comment section.

Madison and Husband Carson Wedding and Their Matching Tattoo

The loving duo exchanged their vows on 16th July 2018. They organized their wedding ceremony at the Lakehouse Inn in East Rockhill Township in Bucks County. Carson’s teammate Zach Ertz and former teammates Trey Burton and Jordan Matthews served as groomsmen at the event. After their wedding, the newlywed groom, Wentz shared many photos of him with his wife from their big day on his Twitter.

“Such a blessing to finally get to marry my best friend! It was an incredible day and God has his fingerprints all over our story! I’m a lucky man with one amazing wife,” the quarterback captioned the photos. Here is one of the photos from their wedding.

Following their nuptials, they flew to Greece for their honeymoon. From their romantic honeymoon, Carson shared a series of images on his Instagram. One of their snapshots even showed their matching tattoos that read “agape.”

According to The Philly Voice, it is a Greek word that is “referenced in the Bible” and “expresses unconditional love.”

Madison and Carson who have been married since 2018 are also proud parents of two children. Carson Wentz’s wife gave birth to their first child, a daughter Hadley Jayne Wentz on 27th April 2020. She was 20 inches long at the time of her birth. The football quarterback unveiled the news with a number of adorable photos of their baby girl on Insta.

Less than two years after Madison Oberg gave birth to her first child with her husband, the proud mama gave birth to another daughter in 2021.

On November 16, 2021, Madison’s husband, Carson Wentz shared an adorable photo of their newborn daughter whom they named “Hudson Rose.”

The photos the proud daddy shared revealed Rose’s birthday as November 16 itself. Besides, she weighed 7 lbs. 14 oz. and measured 19.75 inches in length.

Where Does Madison Oberg Live? Her Net Worth

Oberg currently resides in New Jersey along with her hubby and daughters. Wentz bought the house for $1.95 million back in May 2016. The 8,000-square-foot home boasts five bedrooms, four baths, and two half-baths.

Talking about her wealth, Madison has a $500,000 net worth. In the meantime, her spouse Wentz has earned a decent amount of money from his prolific football career. His estimated fortune stands at $45 million.