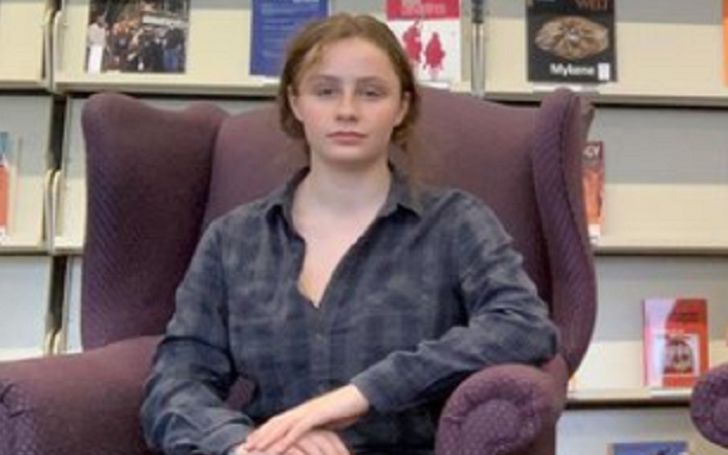 Stella Street Guggenheim is the daughter of one of the long-lasting couples, Elisabeth Shue and Davis Guggenheim. Both of her parents have a great career in the entertainment world. Her doting mother got the Academy Award nomination for her marvelous performance as a hooker in the smash-hit romantic drama Leaving Las Vegas.

On the other hand, talking about her own professional goals, Stella is a painter. But in the past, the star kid used to practice gymnastics like her accomplished high school gymnast mother.

Here are several unknown facts you didn’t know about Stella including her college and siblings as well!

Who is Elisabeth Shue’s Daughter Stella Street Guggenheim? Details on Her College

Stella is a painter by profession who often shares her artistic work via her social media profiles. She posted the photo of her art gallery displaying four oil paintings at the Santa Monica Art Studio on her Instagram back in May 2019.

As for her education, Guggenheim went to Wildwood School and then went on to study art at the Shcool of the Art Institute of Chicago.

Was a Gymnastic Enthusiast

Like her mother, Stella was also a Gymnastic lover who took training at All Olympic Gymnastic Center. She previously participated in several local and regional level competitions.

Besides, her now-successful actress mother Elisabeth was also pretty into gymnast before making her way to the entertainment business. She widely practiced while studying at Columbia High School in Maplewood. Back in 1994, Shue and her brother Andrew were also incorporated into Columbia High School’s Hall of Fame.

How old is Stella Street Guggenheim? Details on Her Ethnicity

Stella is aged 19. She was born in March 2001, in Los Angeles, California. Davis Guggenheim’s daughter was weighed 6 lbs. 7 oz at the time of her birth.

Besides, talking about her ethnicity, Stella belongs to a mixed ethnical background as her father is Caucasian and her mom is of German and English descent.

Guggenheim spent the majority of her early life along with her older brother named Miles William Guggenheim. Miles who graduated from the Brown University often writes articles for The College Hill Independent. Besides, their mom had taken the name Miles William in the honor of her late brother William Shue who tragically died from a freak swing accident on 24th August 1988.

Stella also has a younger sister, Agnes Charles Guggenheim, born on June 18, 2006. The Guggenheim sisters share a deep bond with each other. Back in April 2018, Stella posted her first Instagram photo, showcasing the art of her sista’s face made by herself.

Details on Her Net Worth

Her fortune, as of 2022, is yet to be estimated. But, talking about her upper-middle-class parents’ wealth, her mother Elisabeth has a $20 million net worth and her father Davis’s net worth stands at $20 million.

The family of five currently resides in their Los Angeles house which Elisabeth purchased for $1.65 million back in 2008. The property spreads out in the 832 sq ft space.

Besides, the actress also had a house in Sunset Strip-area which was sold in early 2004 for $1.3 million. Built in 1926, the Spanish-style mansion has three bedrooms, a detached office, and hardwood floors in less than 2,000 square feet.

Davis and Elisabeth tied the knot back in August 1994, in a renowned wedding ceremony. The two have been in a blissful marital relationship ever since. Besides, moving towards their first meeting, they came across each other in a bowling alley even before Elisabeth rose to stardom. In an interview with The Washington Post, Davis said they both fell in love right away. The couple dated for many years before they exchanged their vows.

In addition to their personal goals, the two are also pretty successful in their respective industries. Her father Davis is one of the accomplished directors and producers. He is best known for his work in NYPD Blue, 24, The Shield, and Deadwood.

Additionally, her mom Elisabeth is an actress who has given dozens of hit movies to the entertainment industry. Coming to the limelight with her role in The Karate Kid (1984), the actress soon popped up in several hit big-screen projects such as Adventures in Babysitting and Cocktail. She also appeared in the CBS TV series CSI: Crime Scene Investigation (2012-15).

Does Stella Street Guggenheim Have a Boyfriend?

Stella doesn’t have a beau as of now. The young painter isn’t dating anyone publically, instead, has kept her love life behind closed doors. Many sources say, her current relationship status is single.

Elisabeth Shue’s daughter is active on Instagram with over a thousand followers. But, other than that, we yet to find any other social media handles Guggenheim is officially active in.