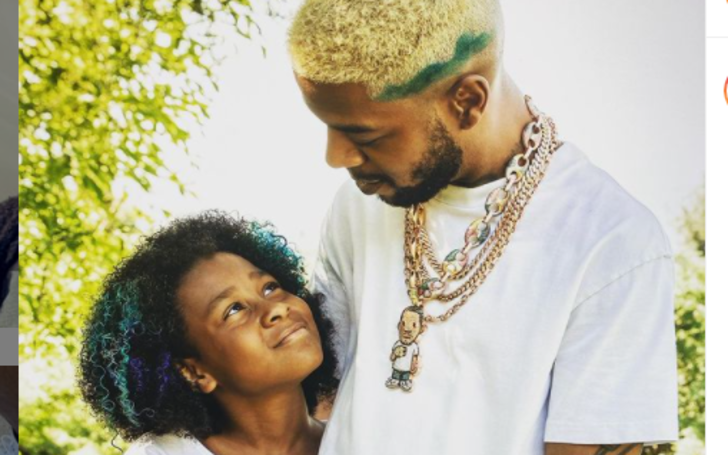 Vada Wamwene Mescudi is the celebrity daughter of Scott Ramon Seguro Mescudi better known as Kid Cudi. Mescudi’s father is a rapper, singer, and actor. People widely recognized him as an influence on several contemporary hip hop and alternative acts.

While the general public might look at Kid Cudi as a grey personality, he has never tried any lesser to become the absolute best father to his children.

Cudi, however, has a checkered history and it has affected Vada to some extent; for one she often had to live in two different houses and families. Know how much is she involved in her father’s musical doings or is she all exclusively living with her mother?

Mescudi was born on 26th March 2010. Her name is a mixture of Germanic and Kenyan, Vada meaning famous ruler in the former while Wamwene in the latter culture (said Wom Win Aye) means Little girl that belongs to special people. From her father’s side, Mescudi is of African-American and Mexican descent.

In December 2020, Adidas launched space-themed sneakers in collaboration with Mescudi’s father, Cudi. The footwear with the name Vadawam 326 is a sweet tribute to none other than Vada.

The number 326, which the Pursuit of Happiness rapper has also inked on his neck, is on each Vadawam shoe. The numerals presumably represent Wamwene’s birth date, the 26th of March. The shoe structures high top 90s with decorative edges straps, smooth leather upper. Add to that is the stability through a torsion bar in the midsole. At the time of its release, the sneakers came in two colorways; a black/grey/solar pink and white/ecru tint/yellow.

In September 2016, Mescudi’s father, Cudi lost a bitter court battle with his baby mama over the custody of their daughter. Scott agreed to yield the full custody of the child to her mother. He gave in after a year of fighting for joint custody.

Cudi claimed he bought a property in Chicago so that he could be close to the two-year-old. And even provided her mother with generous child support. However, in papers obtained by TMZ, Cudi’s former partner, Jacqueline Munyasya claimed he only gave her “sporadic and inconsistent amounts” of money. Mescudi’s mother further accused the rapper of being an absentee father. In addition, she complained about Cudi’s violent tendencies and a “long history of consistent drug and alcohol abuse.”

The two parties eventually came to an agreement and Vada’s mother now has full custody. Cudi, on the other hand, received visitation rights and liability to pay child support. The other reason why Mescudi’s father lost custody was that he had reportedly sent 168 threatening text messages over a four-day period to his baby mama.

What’s more, one of the stranger texts read “hanging around a bunch of white people is not what I want either.”

Vada’s father, Cudi battled with his mental demons in the past. He revealed in an interview that his fame, the untold expectation from fans, and the music industry declined his psychological being.

Mescudi’s dad also admitted he used to take Cocaine to deal with an “emotional breakdown.” This was majorly after failing in several relationships. Cudi, nevertheless, now is clean from drugs and has been so since 2016.

Scott also tweeted in 2019 apologizing to his past girlfriends for not treating them properly.

Vada’s Father, Kid Cudi Relationship History; Does Mescudi Have Any Siblings From Those Affairs?

People started to have a keen interest in Cudi’s personal life in 2009; the year when he started dating entertainment lawyer Jamie Baratta. They, however, had a tumultuous relationship in the years that followed. When all was good between the two, Mescudi’s rapper father even penned the song “Teleport 2 Me, Jamie” for his alternative rock album “WZRD.” The two, nonetheless, parted their ways in 2012.

After that, the Indicud Singer started a fling with actress Stella Maeve, who is most notable for her work on Syfy’s The Magicians. While the couple never talked publicly about the relationship, they were pretty close at the 2012 premiere of Red 2.

Then it was Vada’s mother, Jacqueline Munyasya, who brought romance into the life of the Frequency singer. Of all the other partners that Kid had dated, this seemed to be “it.” And this was the only romantic partnership of Kid that gave him a family. However, the relationship between Munsaya and Cudi eventually ran its course and the couple called it quits sometime in the mid-2010s.

Though, it is unclear, if they are seriously into each other or just a dreamy pairing of the public; considering that it’s been quite a while since they last appeared by each other’s side.

Vada Wamwene Mescudi’s Father Bought A $7.7million Mansion! Is This To Win The Custody Of His Daughter?

In July 2021, Mescudi’s dad forked out a whopping $7.7million to purchase an 11.5-acre estate in a small and prestigious if little-heralded gated enclave in Calabasas, Calif. The property lies in an increasingly popular and ever-more affluent suburb at the western edge of L.A.’s sprawling San Fernando Valley.

The 9,000-square-foot generically Mediterranean mansion comes with half a dozen bedrooms and eight bathrooms. While it’s all good and shows that Cudi is doing extremely good in terms of finances, some believe the house buying thing could be a stunt of his to get an edge over his daughter’s custody. Also, there hasn’t been much update as to what percentage of guardianship Cudi has had on Vada since he lost the court case in 2016.

Some, on the other hand, claim the All In rapper might not have that much of a problem getting access to his now 11-year-old daughter, especially, how comfortable he could be with his $16million net worth.</>

And now a word from Princess Vada the chosen… pic.twitter.com/xmgIMkUntz

Earlier Cudi, himself had shared a vague tweet in which he requested help from “rap God” Eminem.